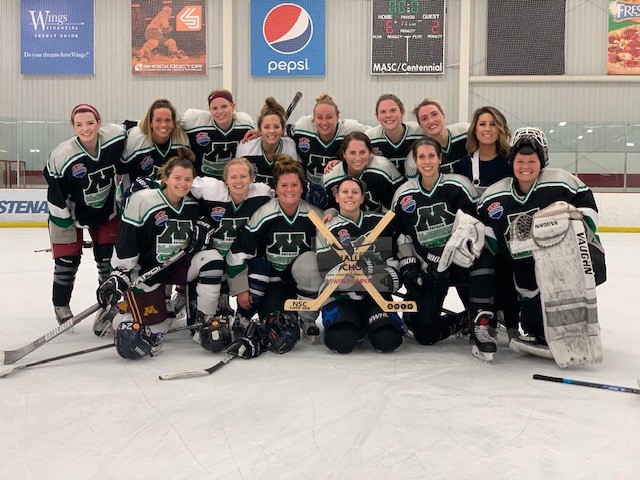 While there was plenty to do this past weekend given Mother’s Day and the fishing opener, many chose to play some tournament hockey.

Eric Besse, tournament director for the 15th annual Walleye Chop adult hockey tournament at Blaine’s Schwan Super Rick on the campus of the National Sports Center complex, gives us the results of this years tournament held this past weekend.  Photos included.  Enjoy!

Hockey, socializing and tailgating give this annual tournament its unique vibe

Blaine, Minn. (May 14, 2019) – The 15th annual Walleye Chop adult hockey tournament wrapped up three days of play on Sunday, May 12 by crowning 15 new champions at the Schwan Super Rink on the National Sports Center campus in Blaine.

This year, a full tournament of teams – 124 – competed in 15 different divisions for men and women. Teams represented seven different states and Canadian provinces: Illinois, Iowa, Minnesota, North Dakota, Texas, Wisconsin and Ontario. Skill levels ran the gamut, from divisions for players with minimal experience, up to the Men’s and Women’s A Division, featuring multiple past collegiate players.

For most of the teams, however, the fun activities rival the hockey as the big draw. There was a fish fry, plenty of tailgating, and a few beers consumed.

“This is probably our tenth year,” said Scott Sahs, with The Buzz, a Rochester team playing in the Men’s D division. “It’s awesome competition, and we love hanging out in the parking lot. It’s a good party atmosphere.”

Michael Johnson of Bloomington, standing outside his motorhome with his team, Fireside, said his team has been playing in the tournament every year, and he said it’s their favorite event of the year.

“The parking lot, the camaraderie, the hockey, the whole deal,” he said. “You just can’t beat it. Hands down the best; they just go over the top. We’ve always had a great time playing here.”

The popularity of Walleye Chop, which is always held on the Minnesota walleye fishing opening weekend, proves that not all hockey players fish. But fish, and fishing, are a constant theme throughout the tournament. Divisions were named after fish species, such as the Muskie or Northern Pike Divisions.

Here are the 2019 Walleye Chop champions: