2013 MIAC Showcase gets off to successful start 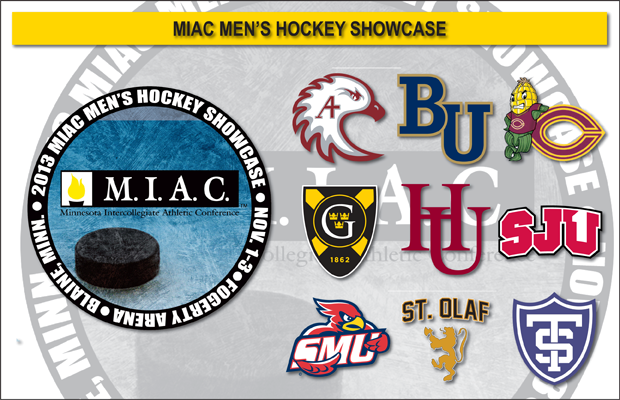 Augsburg, Gustavus and Saint John’s all started the new campaign with success, as all three were victorious Friday in a high-scoring trio of games, as 17 total goals were scored. Augsburg exploded on offense for a 6-2 win over Saint Mary’s, Gustavus held on for a 2-1 victory over Bethel in the tightest game of the day, and Saint John’s started strong in a 4-2 win over Hamline.

Six different Augsburg players tallied goals in the big win, starting with Corbin Chapman’s tally 6:53 into the new season to get the Auggies a quick 1-0 lead. His teammates followed with three goals in the first 13:27 of the second period to extend the lead. Drew Allen scored 2:06 into the period, Nicholas Widing added a power-play goal at 13:14, and Dylan Meier found the net just 13 seconds later.

Niklas Almstrom and Ben McClellan added goals in the third period to help the Auggies get to their total of six. Carl Krieger was credited with two assists and Chapman added an assist for a two-point night as well. Nine different Augsburg players were credited with assists, and 14 Auggies tallied a point. Augsburg dramatically out-shot the Cardinals, 41-22, and John Bretzman made 20 saves to earn the win in the net.

Saint Mary’s found the net once each in the second and third period. Bobby Thompson cashed in on a power-play goal 14:19 into the second period to end the Augsburg shutout bid, and Bob Marx scored 8:49 into the third period. Thompson assisted on Marx’s goal and Nick Gualano, Joey Van Antwerp and Brad Denney also notched assists. Mitch Fernsler made 35 saves while taking the loss in goal.

GUSTAVUS 2, BETHEL 1
| Box Score | Photos |
In the second game of the showcase, Gustavus rode a pair of second-period goals to victory, then held off a third-period charge by Bethel for a narrow 2-1 victory. The Gusties started the season 1-0, while Bethel began the new campaign 0-1.

The two teams battled through a scoreless first period, with Bethel killing off a five-minute major to stay in stride with the Gusties after 20 minutes. However, the Royal penalty kill couldn’t quite get the job done midway through the second period, as Gustavus’ Gustav Bengston got his team on the board with a power-play goal 8:50 into the frame. Corey Leivemann was credited with an assist on the play.

Less than two minutes later, the Gusties pushed their lead to two when Tyler Lapic lit the lamp at the 10:20 mark. Darren Lapic and Drew Aspinwall assisted on the insurance goal, which ended up being the game-winner.

However, Bethel didn’t go quietly into the night. The Royals took advantage of a Gustavus penalty with a power-play goal 5:47 into the final period to make it a one-goal game. Mitch Hughes scored the first Bethel goal of the new season, with Brock Raffaele and Tony Larson assisting. That was all the final-period magic Bethel could muster, as Gustavus clamped down on defense and hung on for the victory.

The Gusties held an 11-shot edge over the Royals, 32-21. Gustie goalie John McLean stopped 20 of the 21 shots he faced to earn the win. Steven Bolton made 30 saves for Bethel, allowing two goals and taking the loss.

SAINT JOHN’S 4, HAMLINE 2
| Box Score | Photos |
Saint John’s entered the 2013 with high hopes after sharing the conference title with St. Thomas and winning the MIAC Playoff championship a year ago, and the Johnnies appeared to pick up where they left off in a 4-2 win against a Hamline team that battled for 60 minutes. The Johnnies burst out to a 3-0 lead, then added an insurance goal late after the Pipers had cut the lead to one.

The Johnnies got the game’s first goal 6:49 into the first when Neal Smith cashed in on a power play with SJU stretched its lead in the second period when Andrew Commers got an unassisted goal 6:43 into the period, and it went to 3-0 on John Carroll’s score less than two minutes later. Smith and Zach Knight both received assists on Carroll’s tally.

However, Hamline wasn’t discouraged by the three-goal deficit. Brandon Zurn got the Pipers on the board with seven minutes to play in the second with Joe Rubbelke and Lane Mahoney assisting. Then, 5:38 into the third, Hamline made things really interesting as Kevin Novakovich scored to make it a one-goal game. Rubbelke assisted again, as did Zurn to give each a two-point night.

The Pipers couldn’t quite complete the comeback, though, as Saint John’s got one back with less than two minutes remaining as Knight scored to make it a 4-2 final score. Carroll and Smith assisted, as all three players notched their second point of the season opener.

Johnnie goalie Saxton Soley, the reigning MIAC MVP, made 21 saves to earn his first win of 2013. Nick Heimer made 19 saves in the Hamline net while taking the loss. The two each had 23 shots in a well-played game to close the first day of action.

Fans who can’t make it to Fogerty will be able to track all the action from afar. There will be a live webcast of all games on the south rink courtesy of the MIAC and Webcast America. Fans will also be able to view the games online on-demand following the event, and order DVDs of each broadcast. Saint Mary’s University will again handle all sports information at the showcase, and the Cardinals will provide live stats for all nine games. Fans can also track the action on the MIAC scoreboard, or on any smart phone or tablet using the MIAC app, which is a free download.