Carla Berg Cup and Regionals On The Line 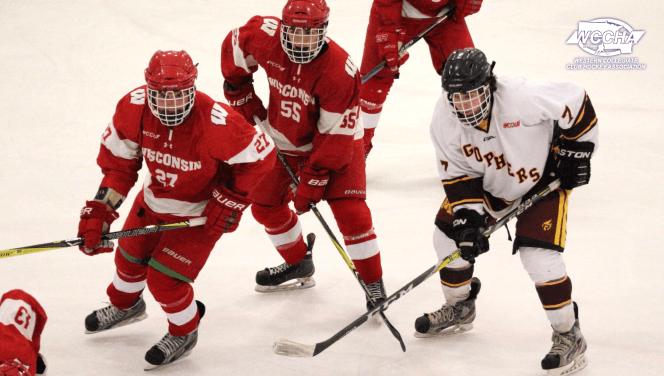 (Featured Photo: The Gophers and Badgers will face off in the opening round, a rematch of last season’s championship game /WCCHA)

Battles Await with Carla Berg Cup and Regionals On The Line

From the open of the season in early September through the final regular season games this past weekend, 11 WCCHA league teams have competed for 8 available spots at the 2019 WCCHA Tournament. While the teams have also found success in the Regional rankings picture, the Carla Berg Cup Playoffs hold double importance – the chance for a league title, but also the opportunity to claim a spot at the 2019 Central Regional Tournament.

Eight teams are confirmed for the 2019 WCCHA Tournament – #1 St. Thomas, #2 North Dakota State, #3 Minnesota, #4 St. Cloud State, #5 Minnesota State, #6 Wisconsin, #7 UW-Eau Claire and #8 North Dakota. Each team has reason to believe it could be their year, and their weekend, for glory. But how did we get here?

In the Northwest Division, St. Cloud State sent an early warning shot with a home sweep over Minnesota-Duluth to open the Division schedule, and continued their momentum up until their final game to earn the Division Championship. Going from 5th place to 1st, the Huskies showed vast improvement in every facet of their game, especially defensively and in goal where the tandem of Devon Dell and Jaxon Castro ruled supreme.

Not far behind, though, were North Dakota State and Minnesota, who tied on points but finished in that order as the Bison held the head-to-head tiebreaker. NDSU’s Riley Fisher certainly played his part as one of only two defenseman in the top 10 in league scoring.

For Minnesota, Dylan Ross was a juggernaut, scoring better than a goal a game for the defending WCCHA Champions. With the 1-2-3 finish, these three teams booked automatic spots at the tournament. 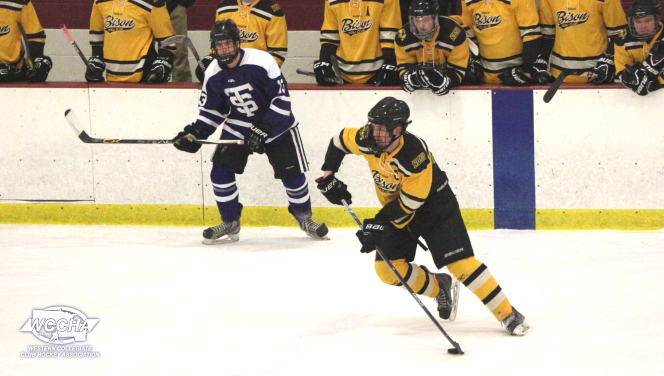 In the Southeast, it was a year of redemption for St. Thomas as they claimed the crown with a perfect divisional record. Led by Captain Jack Sterne and Assistant Captain Tyler Hayes, the Tommies have amassed an impressive 24-3-2 overall record and get scoring from everywhere, making them a tough matchup each night – a key to their consistency.

After a slow start, Minnesota State recovered nicely to get to second place with big time contributors like Justin Novak, and UW-Eau Claire took 3rd thanks to strong play from Jared Konen, Garret Dey and Tyler Husnick. The race was close, but ultimately these three teams locked in their direct bids to the upcoming playoffs.

With six of eight spots claimed, the final two would go to Wisconsin and North Dakota. Both teams did not finish where they would have liked in the Division, but used similarly strong interdivisional/independent league performances to create the necessary resume for a postseason bid. For Wisconsin, a sweep over Northwest winners St. Cloud State was key, while North Dakota simply wouldn’t go away with splits against UW-Eau Claire and St. Thomas.

Missing out this season are Bethel, Minnesota-Duluth and UW-La Crosse, all with league wins that put them in contention until the final few games. Ultimately, though, none were able to get the totality of results necessary to move into the tournament.

With the final seeding confirmed, the tournament features some exciting first round games.

While the #1 vs #8 game often features the starkest gap, in this case the lower seed North Dakota was one of only three WCCHA teams to beat the Tommies. Thus, UST will have to be on guard for a tough challenge from a Fighting Hawks team that never gives up, but will carry confidence and intent into their opening round match-up after a successful regular season.

In the #2 vs #7 game, North Dakota State meets a UW-Eau Claire team they just recently swept. However, those two wins came on the comfort of home ice, and both featured late go-ahead goals for the slimmest of victories. With neutral ground once again pitting the teams against each other, the Bison will have to be ready for an always tough Blugold tournament effort.

The #3 vs #6 game may be the most anticipated, as it features a rematch of last season’s championship game. In that one, both regulation and overtime could not separate Minnesota and Wisconsin, with only a sudden death round shootout goal giving Minnesota the title. The teams did not meet this year as part of the interdivision rotating schedule, and so both will be looking forward to the rematch a year in the making.

Finally, the #4 vs #5 matchup features two classic and successful WCCHA programs facing off for the first time this season. Resurgent St. Cloud State has a defensive game plan that puts them in contention every game, but Minnesota State has the offense to challenge anyone. Which approach will rule the day?

Ultimately, each team has a legitimate shot of overcoming the challenges, finding the necessary effort – and luck – to finish off three games and lift the Carla Berg Cup. Anything can happen in the tournament, though, and has – including 3 years ago when all four lower seeds advanced from the quarterfinals.

With the autobid up for grabs and even the top WCCHA teams hovering around the Regional qualification zone, every team knows the one sure way of reaching the ACHA postseason is to win the WCCHA Tournament. Starting on Friday, we will find out which team is ready to stake their claim for the Carla Berg Cup, raise the WCCHA Championship banner and book their ticket to the ACHA Central Regional Tournament.