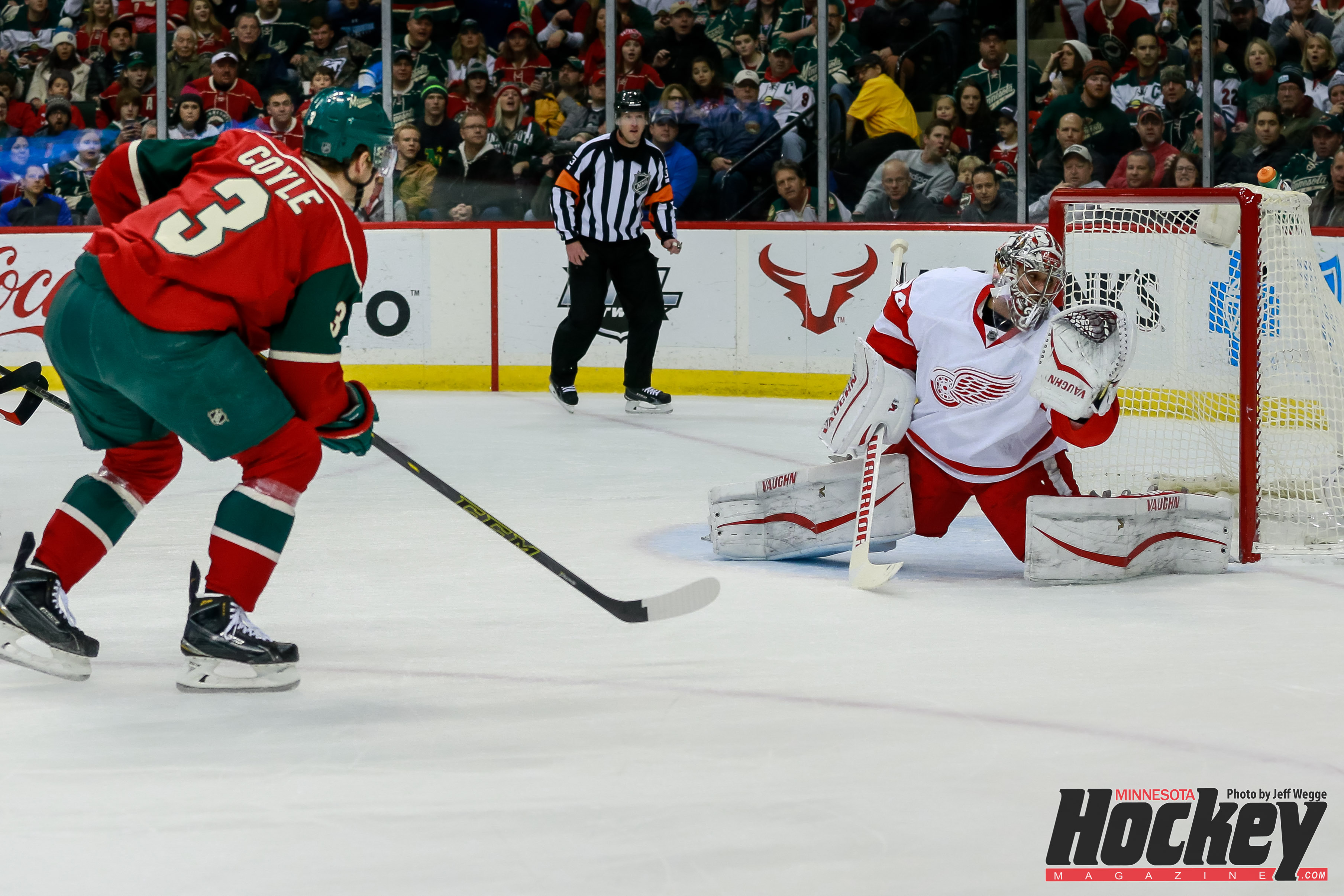 St. Paul — Charlie Coyle downplayed his highlight-worthy goal in Monday’s Wild game versus the Detroit Red Wings. Well, after he joked about the move he made.

“It’s just something that happened. Just a simple move, I guess. It just went in.”

And it was a beauty.

Coyle broke into the zone and grabbed a passed from Nino Niederreiter in the first period. He stick handled the puck around defender Brendan Smith in the slot. All that was left was to put the puck past Detroit netminder Petr Mrazek for a 1-0 Wild lead at 8:18 of the first period.

“We can’t classify it a good one but certainly a win tonight,” Coach Mike Yeo said. “Saw a lot more pace to our game tonight.”

For Coyle, he said it was a good team effort.

He and his teammates tried, though, outshooting Detroit 35-29. About halfway through the game in the second, Coyle executed a pokecheck right in front of the Red Wings net. It was a play that led to more offensive zone time and a scoring chance off Niederreiter’s stick.

Mikko Koivu, who added goals No. 9 and 10 (empty net) late in the third period, said the increased chances were a good sign.

“For sure it’s frustrating when you’re not scoring, but at the same time … usually that gets players going,” Koivu said.

The first-period tally was Coyle’s ninth of the season and third in the last five games. He has five points in the last six games and 18 for the season. He’s three points shy of the 100-mark for his career.

Coyle is ending the month of December better than he started it, going nine games without a goal before scoring Dec. 21 against Dallas and the following night against Montreal. He’s tied with Jason Zucker for third on the team in goals scored.

Niederreiter got the assist on Coyle’s goal and finished the night with four shots on goal, giving him six points in the last seven games.

Talking about the Coyle-Niederreiter pair, Yeo said it was unfortunate that they were on the ice for Detroit’s goal, off Datsyuk’s stick with less than two minutes left in the third.

“Obviously we need them to produce,” Yeo said. “We need them to be contributors to us both offensively and defensively, and they’ve been doing that.”

Darcy Kuemper was supposed to get the start in goal for the injured Devan Dubnyk, but Kuemper was scratched with an upper body injury. Dubnyk started and got the win Monday, while Niklas Backstrom was the back-up goalie.

Dubnyk received six stitches in his right arm after leaving Sunday’s practice. He found out Monday morning that he was getting the nod in net. He took a couple good shots off the blocker Monday morning that stung, but as soon as you get into a game, you don’t think about it, he said.

“It felt a lot better tonight than I expected it to,” Dubnyk said.

Teammate Coyle called him “a gamer,” as he came back to play after his injury.

“That’s Dubs,” Coyle said. “That’s what we expect from him. Comes up huge no matter what’s going on with him.”

Routine saves aren’t routine with a team like Detroit, according to Yeo, but he said Dubnyk played well.

“Duby stepped up,” Yeo said. “That’s a team that’s always going to challenge you. They throw pucks at the net from everywhere.”