Hockey Moms: Get the stink out!

There’s a solution to hockey’s forecheck on the senses 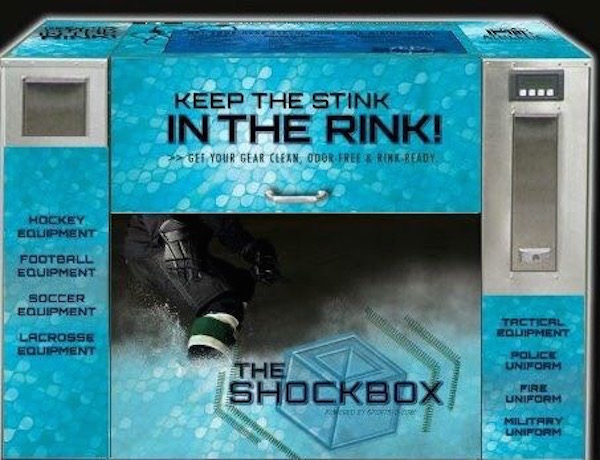 There’s a solution to hockey’s forecheck on the senses

Hockey moms, I know I am not alone when I say that I can’t stand the smell of my son’s hockey gear.  While I wait all year for the hockey season to begin as soon as the previous year has finished, I never look forward to that smell.

My son’s hockey team this year smelled each other’s gloves after practice one night to see whose gloves smelled the worst. Well guess what? My son won.  No, I’m not bragging that he won this contest, I’m disgusted.

How do you get the smell out?  I have tried many of those sprays that you can purchase at sporting goods stores and not one of them have worked.  I have noticed around the rinks there are those boxes to put your gear in and we have yet to do it.  I didn’t want to throw away the money if it wasn’t going to work.  I also don’t want to wash his gear in my washer at home because of all that nasty bacteria.

Well let’s just say the “hockey gods” have answered.  Will and Christine Anderson, parents on our hockey team this year, have purchased three of those equipment cleaning boxes you see around the rinks.  They were purchased through www.sportsozone.com.

They make them for the military for their tactical gear and for many pro sports teams.  In speaking with Will, he revealed that, “most people don’t know, but the smell actually comes from the bacteria, so when you kill the bacteria, you kill the smell.”

When Will was informed by his son that my son has the worst smelling gloves on the team, he offered me a coupon to try the machine.  I was pretty skeptical on whether this was going to work.  Well, we stopped at the rink and tried it out and, low and behold, it WORKS!

His equipment was 100% better than it had been.  It wasn’t 100% “stink” free, but pretty darn close considering I haven’t washed his gear in over a year.  I know, gross, right? So the more frequently I use the machine, the more“stink free” his equipment will become.

The Anderson’s own three of these machines called The DeOdorBox (formerly Shockbox) and you can find them on Twitter at @DeOdorBox.  They are located at the White Bear Lake Sports Center, Vadnais Heights Sports Center and the Schwans Super Rink in Blaine between rinks 1-4.

The cost is $10 and it takes about 15 minutes.  You can put ALL your child’s gear in here as well as paintings (if they smell a little old), yoga mats, work boots, down pillows/blankets, sleeping bags and water bottles and all sporting equipment.

The machine does not take care of stains, though, (wishful thinking) as it is a dry process that attacks the odor causing bacteria.   It is recommended that you sanitize your gear about every 2 to 3 weeks, Anderson says, “depending on how frequently you skate, how bad you sweat, if you wear socks or a t-shirt under your gear, and if you are my son.” Just kidding!

So hockey moms, the next time you head to the White Bear Sports Center, Vadnais Sports Center or the Schwan’s Super Rink take that extra 15 minutes to “get the stink out” of your kids gear. You won’t be sorry.