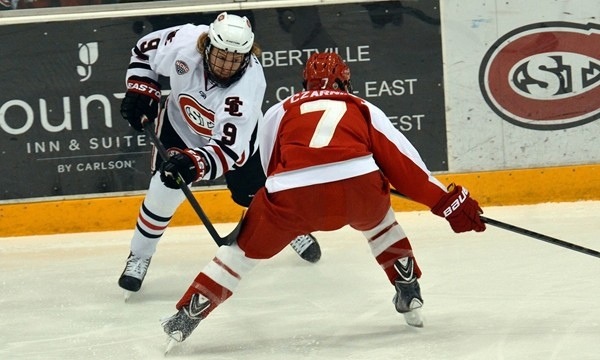 The loss snapped a six-game unbeaten streak for the Huskies and it also marked the first time the Huskies have been shutout since a 3-0 loss at home against North Dakota on Nov. 9, 2012. SCSU and Miami will complete the weekend NCHC series on Saturday, Nov. 9 with a 7:07 p.m. start at the Brooks Center.

SCSU and Miami battled through a scoreless first period as Husky netminder Ryan Faragher charted 14 saves to open the game. The RedHawks broke the tie in the second period with an even-strength goal at 7:08 by Matt Joyaux. Assists on the goal were provided by Alex Wideman and Sean Kuraly.

In the third period, Miami padded its lead to 2-0 with a marker by Riley Barber at 8:42. The lone assist on the play went to teammate Austin Czarnik.

The goal proved to be the game winner for Miami, which improved to 6-2-1, 2-1-0 NCHC on the season. Both Miami and SCSU each charted 31 shots on goal in the contest, with the Huskies outshooting MU in the final two periods by a 23-17 tally. Faragher was the goalie of record for SCSU with 29 saves and Ryan McKay chalked up the shutout with 31 saves.

Gophers Fall to Irish in Opener

The final two unbeaten teams in Division I men’s college hockey fell on Friday night including No. 1 Minnesota. The top-ranked Gophers dropped a 4-1 nonconference battle to No. 3/4 Notre Dame at Compton Family Ice Arena, giving Minnesota its first loss of the 2013-14 season.

After a scoreless first period, Bryan Rust’s power-play goal at 1:58 of the second period put the Irish up by a goal early only for Ben Marshall to even the score at 1-1 minutes later at 6:48 with his second tally of the season. Marshall’s even-strength goal was set up by Hudson Fasching and Sam Warning. Notre Dame would get out of the second period with a one-goal lead though as Sam Herr notched the eventual game winner at 16:54 with assists from Vince Hinostroza and Steven Fogarty.

The Irish would tack on an early third period goal from Garrett Peterson at 3:14 of the third before finding an empty netter from Jeff Costello at 19:09 (assisted by Stephen Johns).

Adam Wilcox suffered the loss for Minnesota, making 29 saves to fall to 5-1-1 on the season while Steven Summerhays moved to 7-1-0 with the win after a 31-save performance.

Bemidji State University held a 4-3 lead over Ferris State University with 13:35 left in regulation Friday at Robert L. Ewigleben Ice Arena in Big Rapids, Mich., but the Bulldogs would rally to push the game to overtime and steal the Western Collegiate Hockey Association series opener, 5-4, just 1:28 into the extra frame.

Five different Bemidji State players netted a point in the game led by defenseman Graeme McCormack (So., Thunder Bay, Ontario), who collected two assists for the first multi-point effort of his career.

Cory Ward (F, So., Las Vegas, Nev.) put the Beavers ahead for the second time of the night at the 6:25 mark of the third period. The sophomore picked the pocket of a FSU player and skated from end to end before ripping his team-leading sixth goal of the season.

FSU dominated the overtime period. BSU was unable to clear the zone and the Bulldogs clamped down and got the game-winner from Jason Brinkley at the 1:28 mark of the five-minute extra frame.

Walsh finished the evening with 38 saves, but was tagged with the loss after surrendering all five of FSU’s goals. His record dips to 3-5-1 on the season.

The Mavericks struck first when sophomore forward Teddy Blueger notched his third goal of the season with Minnesota State on the power play at 2:08 of the first period. BGSU responded a short time later on a Brent Tate tally at 4:12 and the opening frame ended knotted at one.

BGSU’s Dan Dan DeSalvo scored a shorthanded goal at 2:06 of the second period, but Maverick senior Johnny McInnis jammed the puck past Falcon netminder Tommy Burke at 2:57 to even it up. The Falcons scored twice before the end of the period on a shorthanded goal by Adam Berkle at 6:47 and and even-strength marker at 9:48 with what proved to be the game-winner by Pierre-Luc Mercier at 9:48.

Minnesota State freshman defenseman Sean Flanagan wired a wrist shot past Burke at 14:33 for his first career goal to round out the scoring.

The Mavericks used two netminders in the game with Stephon Williams and Cole Huggins combining to make 21 stops. BGSU’s Burke was credited with 30 saves.

Minnesota-Duluth has the week off.