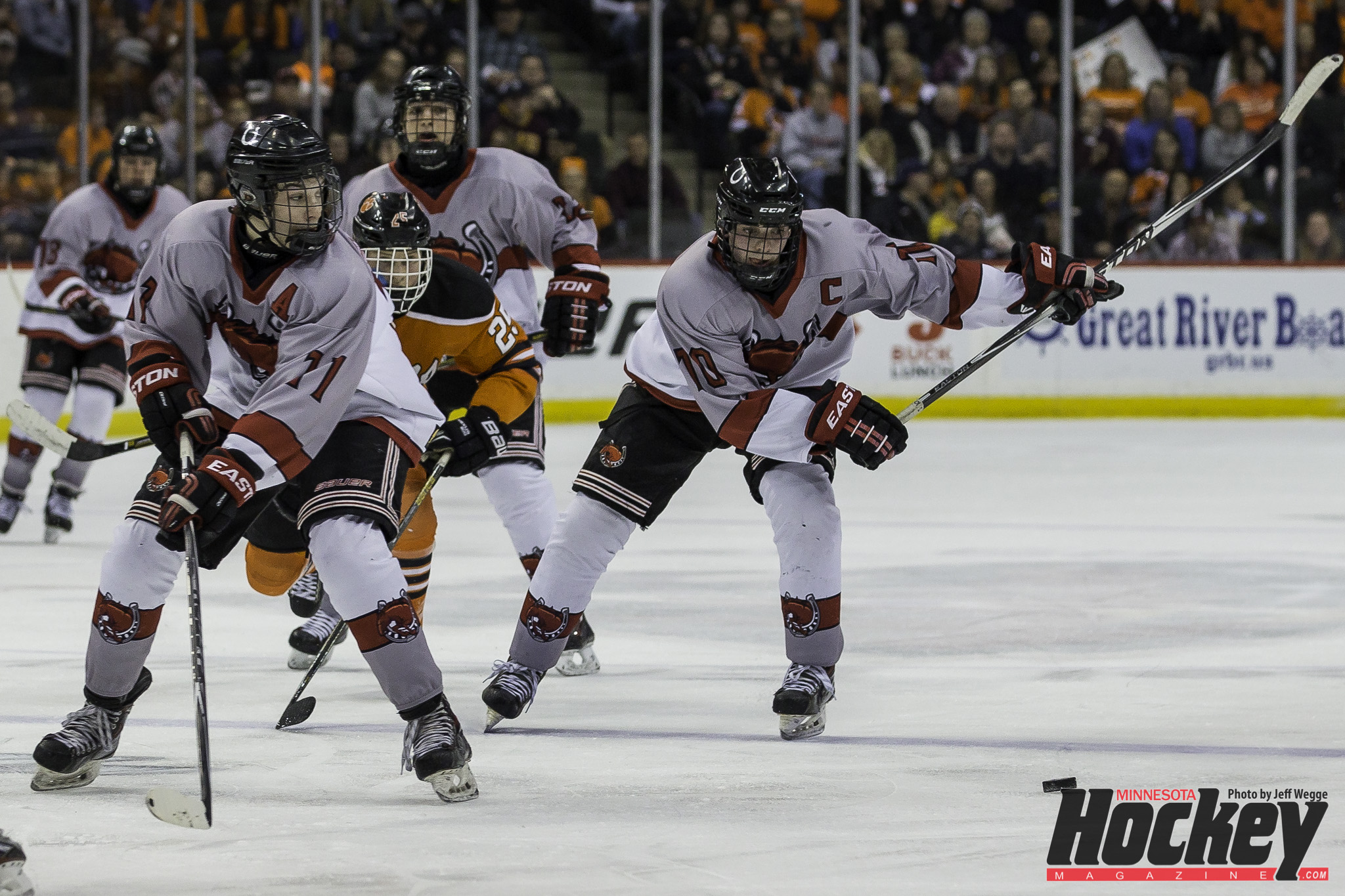 Stillwater’s Noah Cates leaves a drop pass for his brother Jackson in the Ponies’ 4-1 Class 2A Boys State Tournament quartefinal win over Farmington on Thursday afternoon at Xcel Energy Center.

St. Paul – Coming off a game where he scored perhaps the definition of a highlight-reel goal, what would Stillwater’s Noah Cates do for an encore in the state tournament?

For starters, a three-point game in the state tournament.

Noah, a junior forward, and his older brother, Jackson Cates, led the second-seeded Stillwater Ponies (27-1-1) to a 4-1 victory over the Farmington Tigers (18-9-1) in the Class 2A quarterfinals Thursday afternoon at the Xcel Energy Center. Noah had a goal and two assists, while Jackson scored a pair of goals.

But they recognized there’s more work to be done.

Jackson, committed to play at Michigan Tech University, has 26 goals on the season and 60 points. Noah has 24 goals and 63 points. Noah scored the monstrous spin-o-rama goal for the 1-0 overtime victory in the section final over Hill-Murray.

“Beginning of the season, we wanted three banners,” Noah said. “We got two, we want one more.”

After taking a 2-0 in the first period, the key was Stillwater’s third goal, coming just 26 seconds into the third period. Junior defender Jesse Bjugstad set up Noah perfectly for an easy shot into the back of the net.

“I just saw the goalie way out of the net,” Noah said.

Bjugstad came into the zone looking to shoot, but “Noah was wide open over there,” Bjugstad said, who finished with two assists, giving him 20 for the season so far.

That quickly made it 3-0 and was essentially a back-breaker for the Tigers, who were buzzing in the second period but had nothing to show for it. Stillwater coach Matt Doman and his players knew what an important goal that next one would be, after going up 2-0.

“They make that 2-1, you’re talking about a different game,” Doman said. “That’s a big swing. Getting that third one made a big difference for us.”

Jackson added his second tally of the game at 8:06 of the third period, all but icing the victory at that point with a 4-0 lead.

Stillwater’s lead extension seemed to extinguish any carry-over momentum Farmington had after the second intermission.

Farmington had its chances in the second period but couldn’t quite finish. Senior captain Erik Holmstrom scored Farmington’s lone goal with 7.4 seconds left in the third period. But it wasn’t enough to combat the skilled offense of Stillwater, a team that boasts four players with 20 goals or more.

“We had a couple breakdowns that led to goals,” Holmstrom said.

Farmington coach Greg May said he thought the first two periods were a pretty even game. It’s Farmington’s first trip to the state tournament since 2000, when the Tigers played in Class 1A.

A bounce here or there in the quarterfinal against Stillwater might have made the difference, May said.

“We wanted to do something special while we were here,” May said.“ I thought that we… deserved to be tied with them at least (after the 1st). They buried their chances, we didn’t today.”