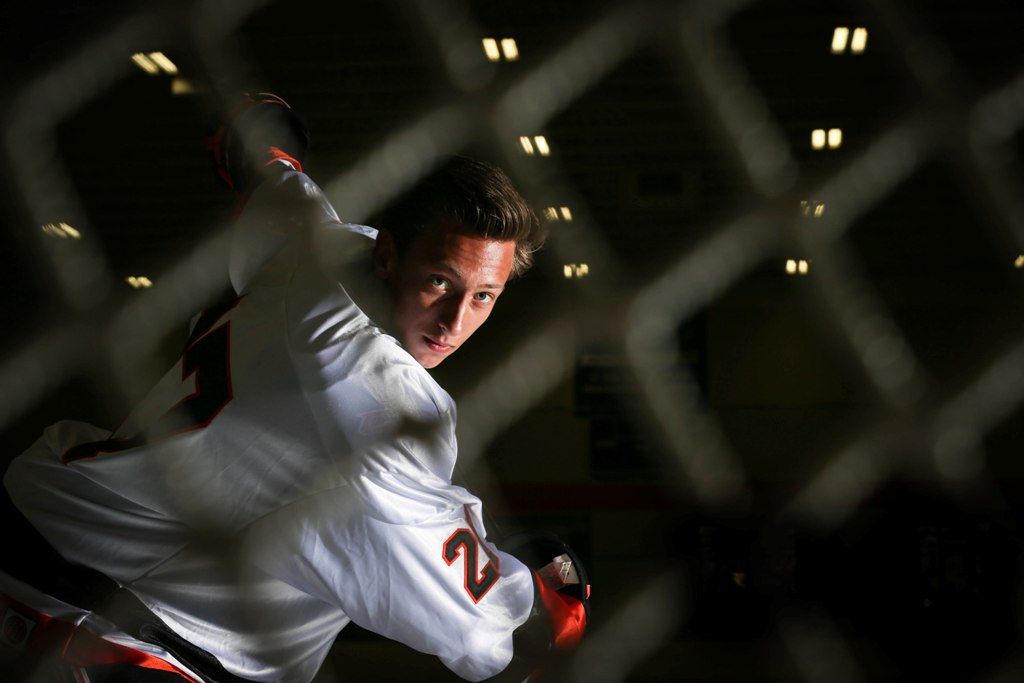 Michael Johnson in a prophetic pose. (Photo by Shawn Gritzmacher)

It lasted less than a half minute but the memory of Michael Johnson’s first shift of the 2014-15 season will last a lifetime.

Just one day after losing his father, Tom, to kidney cancer, White Bear Lake’s senior captain started for the Bears and scored the season’s first goal on his only shift of the game. It turned out to be the difference in his team’s 6-0 season-opening win over Park of Cottage Grove on Saturday night at the Vadnais Heights Sports Center.

The building burst with emotion just 24 seconds into the contest when Johnson received teammate Tommy Giller’s cross-ice feed and blasted a one-timer from the bottom of the right circle into the Park net. Johnson was mobbed by his teammates as they celebrated amid a shower of teddy bears raining down on the ice as fans participated in the team’s annual Teddy Bear Toss benefiting Toys for Tots.

The same teddy bears Johnson’s late father ordered long ago as one of his captain’s parent duties.

“It was truly amazing how things worked out,” said family friend Jon Anderson, who parlayed a stellar high school career at White Bear Lake into playing four years for Doug Woog at the University of Minnesota (1986-90). “We couldn’t have asked for a better start to the season for the kids and also for Michael and the family. There wasn’t a dry eye in the house.”

“If you wrote a script and had a movie, you couldn’t have drawn it up any better,” White Bear Lake coach Tim Sager said. “The young man showed all kinds of courage and his teammates are there to support him.

“I don’t know if I could have done what he did tonight but it’s a testament to both Tom and [Michael’s mother] Angie and the kids that they’re raising.”

With that, Johnson’s night was finished. He simply did not have the energy for an encore.

Tom and Angie Johnson were high-school sweethearts who went on their first date on Nov. 7, 1986 when he was a senior and she was a freshman at Minneapolis Edison. The couple married in 1994 once Angie graduated from the College of St. Catherine and Michael, now 18, arrived two years later.

After 15-year-old Matthew was born, the family settled in White Bear Lake in 2000 before welcoming daughter Lauren, 12, into the fold, providing the household with some degree of gender balance.

“He always told me he wasn’t waiting until he was 30 or 35 to have kids because he wanted to be able to throw the football with them,” Angie said.

That Tom referenced football, rather than hockey, in Angie’s recollection is no mistake according to Michael.

“Before I started playing hockey I don’t even know if he ever put on skates so it was a learning experience for him as well,” Johnson said. “He used to join adult hockey leagues just for fun and he’d go out there and try his best but he wasn’t always the best one out there, that’s for sure.”

The Johnson family’s lives were turned upside down on Saturday, May 30, 2014 when Tom noticed a lump on his left side. A cat scan revealed a large mass on his kidney which had grown to the point where a portion of it was resting on Tom’s colon.

Surgery was performed on June 4 to remove his left kidney, the tumor and a small portion of his colon. Early indications were the surgery was a success as Tom was initially recovering well. It wasn’t long, however, before the Johnson’s were dealt a setback.

A visit to the emergency room six weeks later revealed the cancer had returned and Tom began chemotherapy treatments on July 25. Within days, though, he was hospitalized to be treated for dehydration and nausea as a result of the chemo. 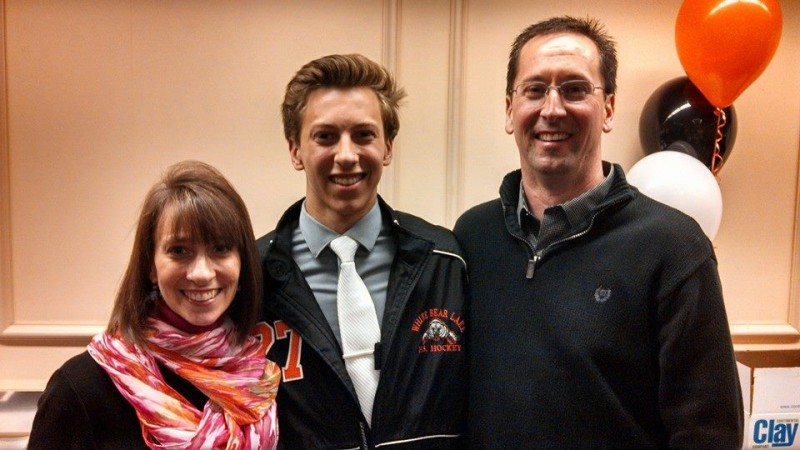 As he continued to battle through the effects of both intravenous and oral forms of chemo, Tom attended soccer games, football games and even the Homecoming dance as he sought to maintain some level of normal in his life. He was especially eager to see Michael back on the ice with the White Bear varsity wearing the captain’s ‘C’ on his jersey.

“Tom was the dad that was always at the 7 a.m. hockey practice and any out-of-town tournaments, Tom was always there,” Angie said. “So it was an adjustment for all of us because he wasn’t able to do all of those things anymore. He hated that part of all of it because the kids were his life.”

But the chemo was not shrinking Tom’s tumors to the degree he, Angie and his oncologist had hoped. When it was discovered that one of the tumors perforated his small bowel and colon, Tom underwent emergency surgery on Oct. 30 at St. John’s Hospital in Maplewood. Surgeons were able to remove the damaged areas along with the largest of Tom’s tumors.

Although his post-surgery condition offered glimpses of hope, Tom’s cancer had spread too much and grown far too aggressive for the chemotherapy to be effective. On Nov. 19, the excruciating decision was made to enter Tom into hospice care and get him home to be with Angie, the children and his beloved dog Beau as soon as possible.

“Tom was really optimistic up to when they decided to stop fighting and just go into the hospice program,” Anderson said. “It looked like the chemo was working but it came back so quickly and so aggressively that at that point they made that really tough decision.

“It’s been a roller coaster ride.”

Complications with his medications delayed his discharge from St. John’s, but on Nov. 24 — nearly a month after his surgery — Tom finally returned to the place the Johnson’s had called home for the past 14 years.

As Sager observed the throng of players participating in White Bear’s varsity tryouts a few weeks ago, it became readily apparent his captain was struggling.

“He didn’t look very good in tryouts in the sense of physically looking good, he sort of looked grey,” Sager recalled.

After a visit to his doctor, Johnson learned he was already in the latter stages of an undiagnosed case of mononucleosis which had sapped his energy. Johnson participates in several school-related activities outside of hockey so his mother believes his already full plate, coupled with strain brought on by Tom’s illness, made his immune system vulnerable.

When the diagnosis was delivered and he learned he not only couldn’t practice but would miss the home opener (or so he thought) Johnson struggled to cope with his disappointment.

“But then I sat down with Sager one day just talking about life and he said when he told his wife I was down with mono she looked at him and said, ‘That’s a sign. That’s God telling you that you need to spend more time with your dad.’ And that really hit home so that was a blessing from there on out.”

Although limited by fatigue, Johnson was finally cleared to participate in practice in the week leading up to the season opener. Despite his exhaustion, Johnson was determined to take the ice with his teammates on opening night.

With the help of The Horn, a website run by a pair of White Bear alums dedicated to live streaming White Bear Lake sports, Anderson put together a plan which would allow Tom to see his oldest son on the ice at least one last time as he watched from home online.

“Jon had kind of arranged, if Tom was still here, that The Horn would televise the National Anthem and the starting lineups, which they usually don’t,” Angie said. “And then they’d drop the puck and Michael would just skate off.” 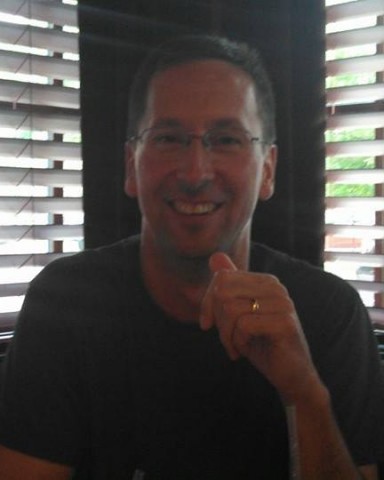 While Tom’s heart and soul continued to fight like a heavyweight champ, his cancer-battered body could no longer take the beating. On the morning of Nov. 28, Tom Johnson quietly passed away.

“I always knew he was a fighter but there were so many complications and he always had a good attitude,” Angie said. “He just wanted to beat it so badly and he fought so hard.”

The plans for Michael to participate in Saturday’s pre-game festivities remained in place, only now as a way to honor his late father’s memory. But even his mother was unaware of Johnson’s decision to skate out the shift.

Johnson said he and his linemates, Brady Anderson and Giller, originally had a faceoff play in mind designed to create a shot for him but it didn’t work out. Ultimately, his 2-on-1 with Giller turned out to be a suitable replacement.

As he described his thoughts as the play developed, Johnson couldn’t help but direct a little friendly razzing toward his friend, linemate and the Bears’ leading returning scorer.

“If the circumstances were normal, I would be expecting Giller to shoot,” Johnson said with a chuckle. “But in this circumstance I knew he was going to pass it. He did his little fake shot, totally made the goalie bite and I just knew as soon as it hit my stick that it was going in.

“My mind practically went blank after that; I couldn’t tell you what I remember.”

Angie, on the other hand, remembers the moment quite well and speaks for everyone there when she says “it was perfect.” 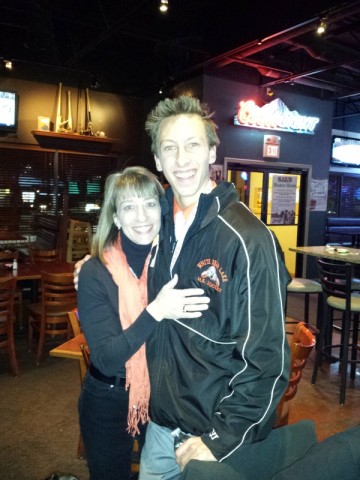 Angie and Michael after his emotional goal.

“I just thought, Tom really is here,” Angie said, her voice cracking with emotion and requiring a moment to compose herself. “I think the kids will always feel his presence, even though he might not be here on earth. It will be a memory we won’t ever forget.”

“It’s the way my dad would have wanted it, I guess, my town behind me,” Johnson said. “And that’s what I wanted as well.”

Johnson skated through a sea of Teddy Bears as he made his way toward the bench to celebrate with the rest of his teammates and that was it: 24 seconds, one shot and one extraordinary goal. By the start of the second period he was still on the bench, but in his street clothes.

“I’m a true believer in life of everything happens for a reason,” Sager said. “It took everything for an old guy like me to keep from tearing up. Good things happen to good people and for some reason things worked out tonight.”

The long journey ahead

Tom insisted his funeral arrangements be planned around the hockey schedule. “That was his biggest thing, not to interrupt anything to do with hockey,” said Angie who, of course, is honoring that request.

The funeral will take place at 1:30 p.m. on Saturday, Dec. 6, at St. Stephen’s Lutheran Church in White Bear Lake.

Johnson said he is thankful for his teammates, particularly his fellow captains, Anderson and Caden Wippler and their parents, along with Sager and his staff. All have been tremendously supportive throughout Tom’s illness and passing.

Michael and his family will need all of them, and more, as they begin the process of moving forward.

“The hard days are coming, the reality will strike and the next thing you know your father isn’t there,” Sager said. “That’s when you need friends and coaches and people that surround you and pick you up. There’s going to be some tough days ahead for him and for the family but we have a great hockey community here.”

When asked if the last six months have taught him anything about himself, Johnson paused briefly and said, “Just keep on going, I guess. I’m still trying to figure that part out, I think.”