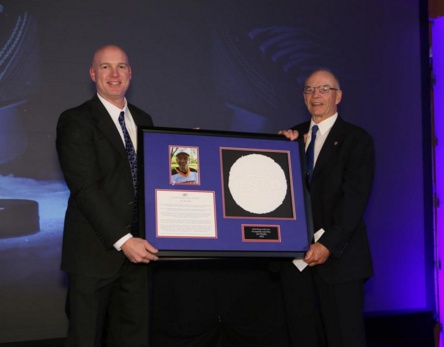 Jim Westby is likely a familiar name to many who follow high school and college hockey in Minnesota.

Briefly, he played at South High School and in 1955 scored one of the most notable goals in Minnesota State High School Hockey Tournament history, when, in the 11th overtime, he notched the tournament winning goal against Thief River Falls.  He is also a former Minnesota Gopher (1955-57, 1961-63), US National (1959, 1961), and US Olympic (1964) player.

He is all too familiar, especially at the national level, for his on-going efforts and success at bringing championship adult hockey teams to tournaments all over the country since 1987.

This attention was not lost on USA Hockey officials who have over many years presented Jim and his Minnesota Old Timers the championship banner at the USA Hockey Adult National tournaments.  Since 2007, Jim’s Old Timers have won 6 out of 10 National titles, often competing in younger age brackets.  The team currently plays in the 70+ age group.

A recent phone call from USA Hockey officials informed him that he was first nominated and then selected to receive the 2016 Adult Player of the Year award (previously known as the “Ironman” award) at a gala “Night of Tribute” affair in Colorado Springs, CO, on June 8, 2016.

MHM, in a phone interview, talked to Jim about his experience and thoughts on receiving this honor and attending the festive “Night of Tribute” event in CO.

The Notification, Off to CO. 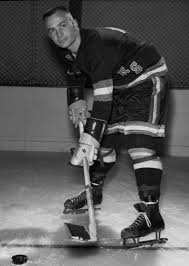 Westby as a Golden Gopher

Asked if he saw this coming, he laughed and said, “I was totally caught by surprise, but I had a big smile on my face when I told my wife, Gail.”  He said he was very honored and humbled by the selection and that his wife and family were very happy and proud of him.  They added that Jim was well-deserving for doing so much for hockey in Minnesota.

A second and third call from USA Hockey officials provided all the details about air travel and hotel arrangements, not only for Jim, but for Gail as well.  His daughter Ann and her husband Dave Snuggerud (former Minnesota Gopher, US National and NHL player) and their 3 children, wanting to witness the event first hand, piled in their family car and headed out to CO to meet Jim and Gail.

Jim noted that the accommodations provide by USA Hockey were excellent and that they were treated very much like celebrities.  The event, which was previously held at the popular Broadmoor Hotel in Colorado Springs, was held at the beautiful Hotel Elegante Conference and Event Center. 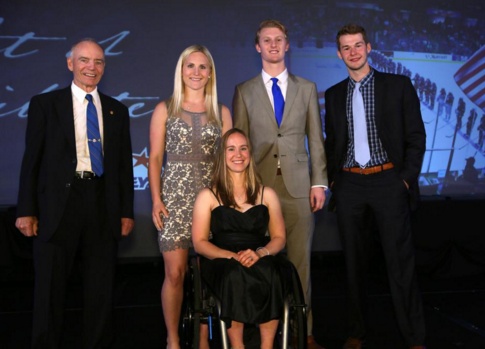 Westby, on left, with other award winners (USA Hockey)

Jim was informed that he had to give a short acceptance speech, but that he had to keep it at 3 minutes.  After a reception, dinner, and the USA Hockey service awards, Jim was to receive the first player award of the evening.  He received the award at center stage where pictures were taken with USA Hockey dignitaries.  His speech followed.

He explained, “Given only 3 minutes, I couldn’t delve into my hockey background much, so I thanked USA Hockey for being considered and for being selected for this award.  I also thanked Gail for 53 years of supporting my hockey passion, and my kids for being at my side at the ceremony.  It meant a lot to me that my family was in attendance.”

He briefly touched on a couple of his hockey playing highlights including making the ’64 Olympic team and playing for the US National team behind the Iron Curtain in 1958/59 in Moscow and Prague.  He said, “I believe that we were the first team to do that.” 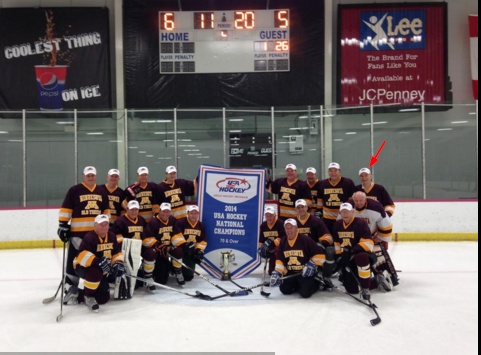 Jim was very impressed with the way USA Hockey managed the entire evening.  He noted that, “The MC was terrific, kept his cool and the evening moving on a tight schedule.  I was surprised as how many service awards there were and at how many USA Hockey volunteers had put so much time and energy into their work.”

He was also moved by the Disabled Athlete of the Year award winner, Sarah Bettencourt, who spoke about her love for sled hockey and how it changed her life after retiring from the U.S Marine Corps in 2012 with 100 percent disability.

There were two other players from Minnesota that won awards at this year’s USA Hockey “Night of Tribute” in June.

Junior Player of the Year – Rem Pitlick.  From Plymouth, MN, Rem was the 2016 USHL scoring champion for the Muskegon Lumberjacks.

Goalie of the Year – Hunter Miska.  From North Branch, MN, Hunter had a record-breaking 2016 season with the Dubuque Fighting Saints with 32 wins.

For more information on the awards ceremony and the players, see this USA Hockey link HERE.

Jim considers himself, along with all the other adult hockey players in his circle of friends, very lucky indeed.  He said, “I feel honored to be playing with the same group of guys after all these years.  It’s just remarkable how much fun it has been to travel, meet people and oh, yes, to play some hockey too!”

He continued, “I still enjoy it. It has been a great run, everyone gets along and everyone is welcome.”

The group of adults Jim plays with admire and respect him a great deal.  He is affectionately known as “The Commissioner”. 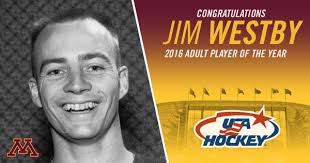 He appreciates what USA Hockey has done for the adult players in their efforts to help them continue to play and have fun.

He also wanted to acknowledge fellow player, Phil Zietlow, for organizing many of the yearly MN Old Timer tournament trips to Danbury and to Baltimore.

Finally, he said, “We are very lucky in the Twin Cities to have an abundance of ice time and rinks at a reasonable price.  We still have our health, maybe some new body parts and always enjoy the after-skate festivities out in the parking lot.”

Jim’s award as the 2016 USA Hockey Adult Player of the Year (Ironman) is truly well-deserved.

Congratulations from the entire staff at Minnesota Hockey Magazine!

Minnesota Hockey Mag published a story about Jim and his Minnesota Old Timers team in 2012 and highlighted his success at that time.  See the article HERE.

Past winners of the USA Hockey Adult Ironman award included other familiar names from Minnesota.

2007 – Marv Jorde.  Played for the Gophers, U.S. National team, 10 years as a semi-pro and led the adult Parkers Hockey Club to many MN State and national Senior A championships over a 25 year period.

2013 – Sue Ring-Jarvi.  Recognized as a pioneer in Minnesota women’s hockey, Sue organized the U of M Women’s Hockey Club team in 1974 and initiated girls’ hockey programs in the metro area from 1976-78.