Schwartz: Too Much of a Good Thing 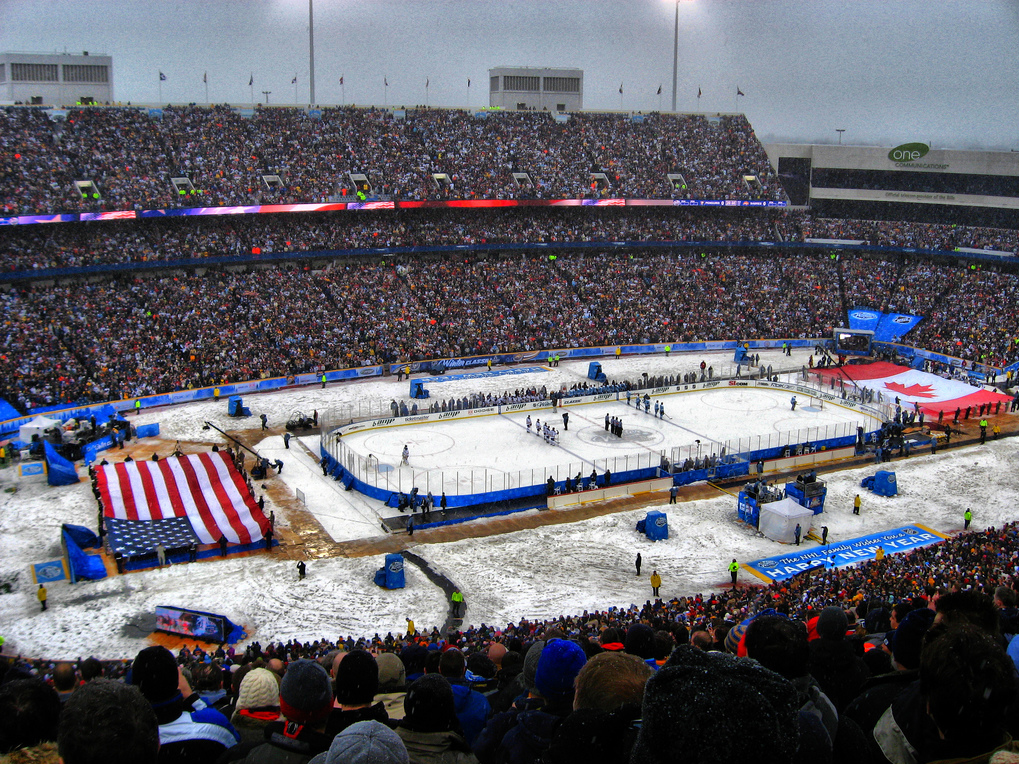 Outdoor hockey is losing its luster in flooded market …

The NHL is ruining outdoor hockey for me.

When I was a kid we skated on the pond all day. We started at sun up by pushing a four-person shovel/Zamboni and skated till our toes were literally about to fall off with frost bite. And we loved every second of it.

Do I sound like a cranky old man yet? Well hang on.

Many of us started hockey that way. It’s what we loved about the sport. The freedom of the outdoors, the wind in your hair, snot frozen to your face and the possibility of a game that just never ended.

We pretended we were Gretzky, Lemieux, Messier, Rob Ray (Google him—seriously, you’ll get some great video); and we just played, without rules and regulations or line changes. It was and still is the purest form of the game.

It’s such an experience that in Minnesota alone there are numerous outdoor tournaments every year. So now you can spend every weekend for the entire winter explaining to your significant other why you’d possibly want to skate when it’s minus 30 outside … and love every minute of it.

We often thought, ‘Hey wouldn’t it be great if those big-shot NHL guys played outdoors?’. We watched ‘Mystery Alaska’ and fell in love with the idea of a small town group of Alaskan hockey players taking on the New York Rangers.

A decade later the NHL began the Winter Classic in the U.S. (for the purposes of this article I’ll save the debate about the Heritage Classic which began in 2003).
The first Winter classic in 2008 in Buffalo was awesome, exactly how we’d all hoped it would be. Players dealt with beautiful falling snow and, in typical pond hockey fashion, the game just kept going until Pittsburgh won in a shootout.

Six years later, the NHL is now expanding the Winter Classic to a “Stadium Series” with games in New York and (sigh) Los Angeles. Because nothing says hockey like sunny skies and 50 degree temperatures at Dodger Stadium.

While I am very much for anything that spreads the game of hockey – especially in markets where it’s not hugely popular (I’m looking at you L.A, who routinely ignored or made egregious errors regarding the Kings even during their playoff run) but I worry these games will not continue to draw interest. While that wouldn’t be the case for the hardcore hockey fans, the NHL shouldn’t be concerned with whether they’ll be tune in.

But for those that aren’t persistent purveyors of puck, I worry that this many outdoor games will eventually become just another game they won’t watch.
The first Winter Classic in 2008 drew a great TV rating (for NHL hockey) and has drawn 4.1 million viewers since. But I can’t help but wonder, are all of these outdoor games too much of a good thing? I mean, I love to watch the BCS college bowl games, but I can’t say I get all that excited for the Famous Idaho Potato Bowl or the GoDaddy.com bowl unless my team is in it – no offense.

What I worry about is that the Winter Classic will suffer a similar fate. Sure, New York and Los Angeles might watch the games (again, I doubt LA’s commitment to this) but for the rest of the country it’ll just be background noise.

I understand why the NHL is doing it. The game is big money and those two cities are the banks. They hold an enormous number of potential fans and therefore a LOT of dollars. We live in a free market society and the NHL is in the business of making money.

But for how long?

As we add more games to the “Stadium Series” will the luster of an NHL outdoor game wane? I hope not but I am afraid that it will. I wish I had some great inspirational piece of advice for the NHL. Something that would assure you that more outdoor hockey is only a good thing for the game long term, but I am afraid it’s not.

There is no doubt I’ll watch all of the games and, if you’re reading this, then there is a good chance you will too. But will it grow the game long term for the casual fan? I am not sure that it will and how in the world have we had five of these games and not one has been in Minnesota?

I guess that’s another column for another time.