3-0 deficit a bitter pill for Wild

Struggles against Chicago only get tougher to swallow 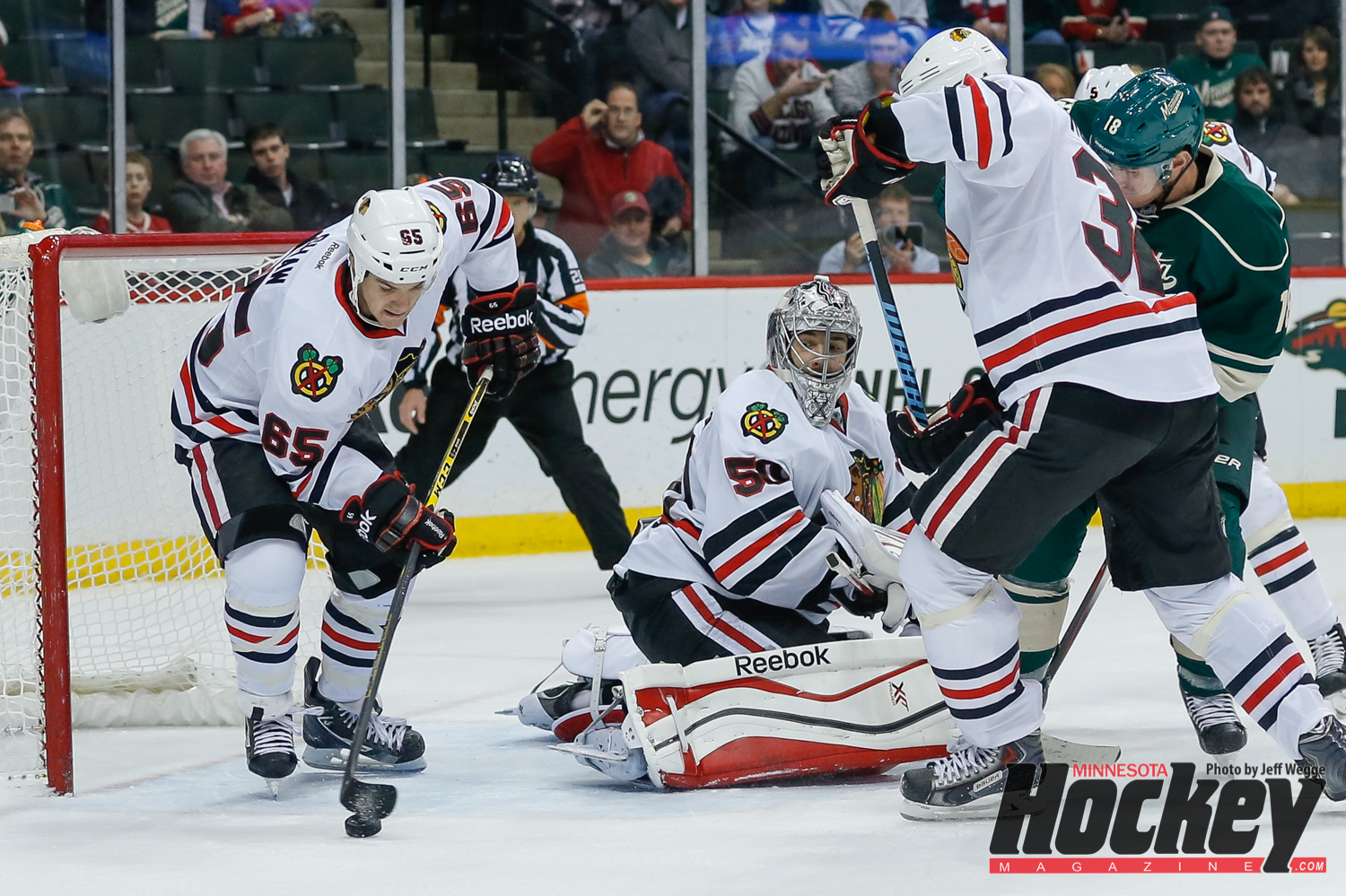 Struggles against Chicago only get tougher to swallow

It’s been nearly a year since the Chicago Blackhawks were gifted a 2-1 Game 6 overtime win over the Minnesota Wild in the second round of the 2014 Stanley Cup Playoffs.

The puck ricocheted off of an Xcel Energy Center glass stanchion to Patrick Kane — of all people — who, in a split second facilitated Minnesota’s second straight postseason elimination by the Blackhawks.

Fast forward to Tuesday night’s Game 3 in which Kane scored the lone goal, his fourth of the series, in a 1-0 Chicago win in St. Paul to give the Blackhawks a commanding 3-0 second-round series lead.

The Wild may very well win Game 4 at home on Thursday and avoid a sweep, but to expect even this resilient group to become just the fifth team NHL history to rally from such a deficit is asking a lot. Wild defenseman Ryan Suter, however, offered a slightly different, albeit unrealistic, take.

“We’ve always seemed to make it harder on us than we need to,” Suter said. “Maybe this is a good thing for us.” 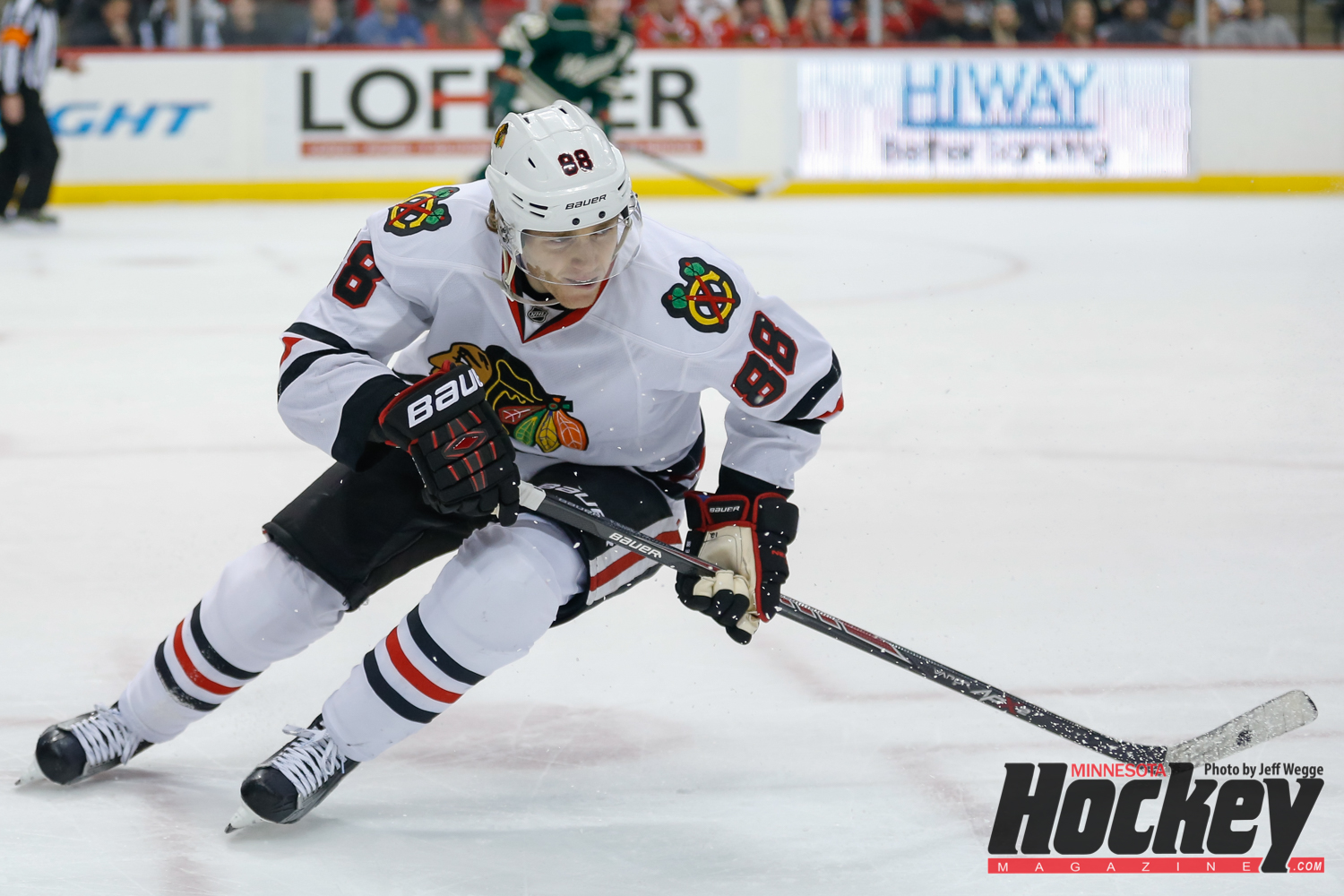 Chicago’s Patrick Kane continues to be a thorn in Minnesota’s side, especially in the postseason. (MHM Photo / Jeff Wegge)

Each of the aforementioned Kane goals was his sixth of the postseason and both, one unequivocally and one potentially, killed the Wild’s postseason.

But they also produced vastly different post-game reactions from players.

Kane’s overtime winner a year ago left Minnesota with a sense of disappointment and frustration in its failure to advance, but it was tempered by pride in advancing past the first round for the first time in 11 seasons and pushing the defending Stanley Cup champs as hard as they did.

“I thought we had our chances and that’s why it really sucks right now,” Wild captain Mikko Koivu said at the time. “It’s been a great run. It’s been the best time of my NHL career and when it ends like that it’s an empty feeling right now.”

Zach Parise added, “We did a lot of good things to get to where we are but it’s disappointing to be ending right now.”

Win, lose or “happy point,” Parise is generally not one to shy away from questions after a game, but it was clear Tuesday’s loss particularly stung Minnesota’s assistant captain. He responded to eight questions with a total of 101 words.

When asked where his team goes from here, Parise replied, “Win the fourth game. That’s about it.”

While others in the room may have offered more in terms of sound bites, the cloud hovering above them was a few shades darker than it was 51 weeks ago.

The faces, such as Parise, Koivu, Jason Pominville, Suter and Mike Yeo, remain the same but their expectations have since risen to a point where the Wild’s current conundrum is virtually inconceivable to them.

“We know what we’re up against, so I’m not going to get up here right now and give a big rah-rah speech,” Yeo said after Game 3. “We’ve got to win a game. It’s as simple as that. In all honesty, I’ve never been here before. It’s kind of unfamiliar territory. I guess what you do is try to draw upon previous experiences even though it’s not the same.”

Yes, it’s true this same cast of characters compiled a pitiful 18-19-5 record through 42 regular season games and stormed back to make the playoffs. But while its 28-9-3 mark to close out the season may reflect overachievement to a degree, it is by far a more accurate depiction of the Wild’s capabilities.

So, of course, Minnesota looked at this series as a chance to advance to the Western Conference Finals for the first time since 2003 — especially after the Wild dispatched St. Louis, considered by many a tougher matchup for them, in six games. 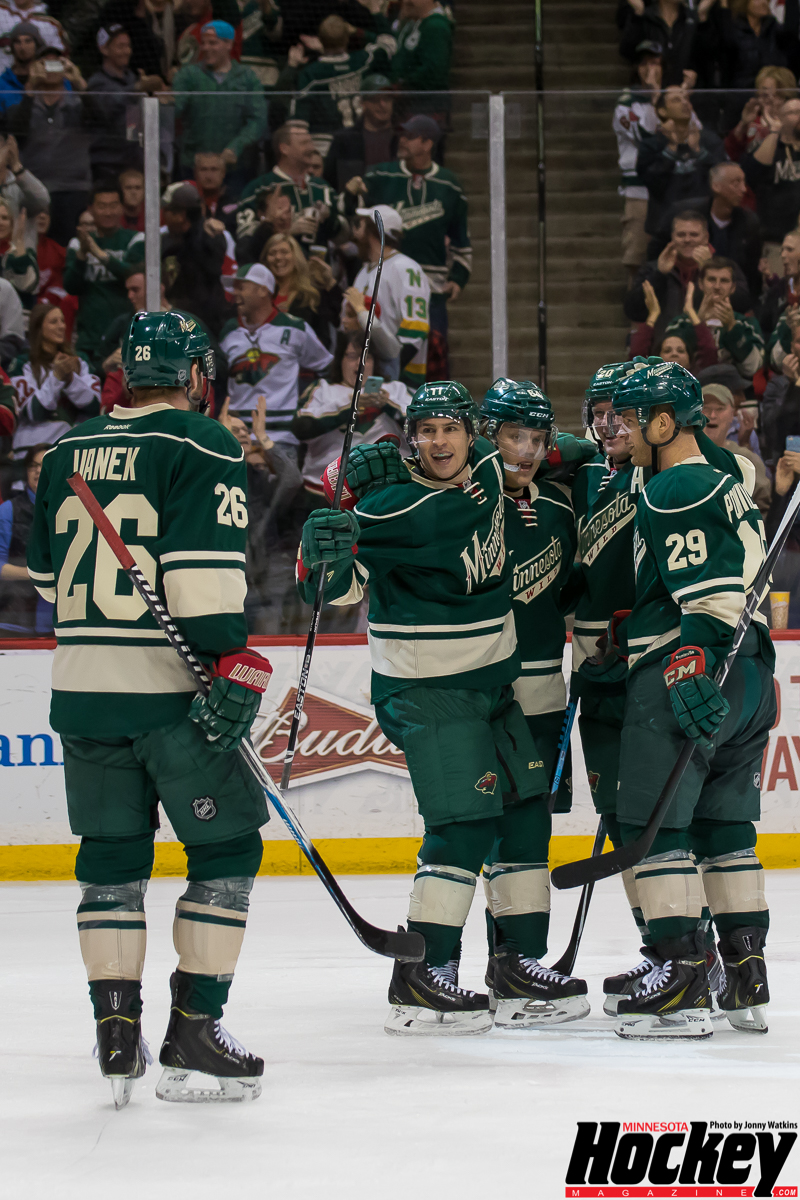 Scenes like this have been few and far between for the Wild in their series with Chicago. (MHM Photo / Jonathan Watkins)

But the playoff demons which have plagued the Wild against Chicago the past two seasons linger: Kane, Corey Crawford, Jonathan Toews, Patrick Sharp, Marian Hossa and, let’s be honest, some pretty miserable puck luck.

Even the one Minnesota exorcised, its own goaltending stability, hasn’t made a difference as season-savior Devan Dubnyk hasn’t been up to par against the Blackhawks. When asked what happened on the Kane goal in Game 3, Dubnyk took the Parise approach.

“Well, he shot it through my legs. That is what happened.”

But none of the rest of it matters if the Wild can’t score.

“We have to make sure we play our heart out next game and make sure we get some goals,” Niederreiter said. “That’s the biggest thing, we can’t win if we don’t score and that’s exactly what happened tonight.”

The oft-criticized Vanek has zero goals to go with his four postseason assists which hardly make up for his defensive liabilities.

On the other hand, Chicago’s five best goal scorers in the regular season have scored seven of their 17 overall postseason goals in this series and while Hossa, too, is scoreless he’s also a tremendous asset in his own zone.

Looking back at how the series has unfolded, it would be easy to recall specific key moments in each game and ponder the “What if …?” scenarios and the impact they had on the overall outcome. But Koivu dismissed that notion without hesitation.

“We haven’t done that and we’re not starting to do that,” Koivu said. “We’re going to take every positive thing that we have and what we had throughout the season. Right now we’re going to get ready for Game 4 and not look any further than that like we’ve been doing all season long.”