In repeat of 2013 semi’s, Bullock overtime winner against Red Wing sends Blake back to defend in title game 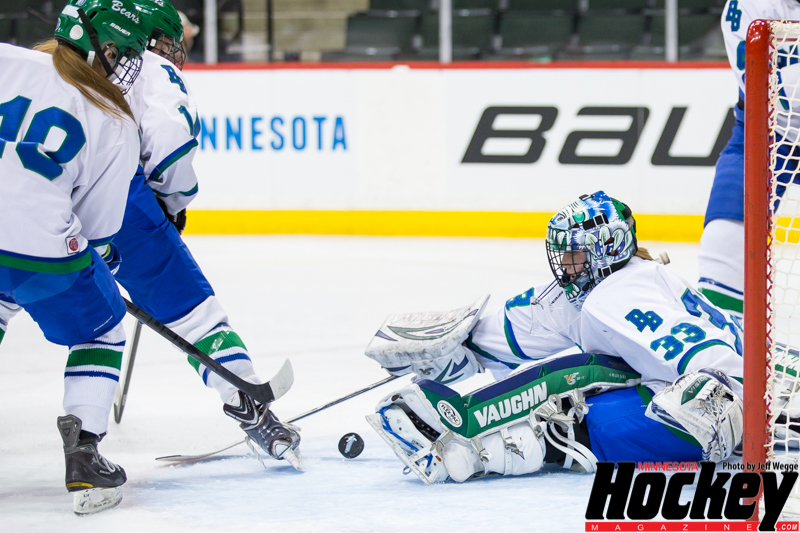 SAINT PAUL—Defending state champion The Blake School of Minneapolis will defend their title on Saturday after fighting off a strong challenge from a determined Red Wing Wingers team.  Blake once again broke the hearts of the Wingers with a 5-4 double overtime win.  Blake continues to have Red Wings number, with the Wingers closer than ever, having several great opportunities to finally beat their nemesis before bowing in overtime.  Blake  defeated Red Wing last year in the semi finals before defeating the top seed Warroad by a 7-2 margin to capture the 2013 title.

Blake started out with a quick goal two minutes and fourteen seconds into the game as Sylvie Wallin was able to find the back of the net.  Red Wing, With a chance to dethrone the champs,came right back, led by their 100 point Senior Nicole Schammel.  Schammel entered the tournament with 58 goals and 100 points and a school record of 266 goals and 446 total points.   With one game to go, Schammel leads all scorers in the state tournament, adding another 5 goals and 4 assists heading into the third place game tomorrow against St. Pual United.

Schammel would even the score at the 6:48 mark tying the game as Red Wing took control of the play out shooting Blake by a twelve to seven margin after one period.   Red Wing’s Taylor Heise would give the Wingers their only lead in the game early in the 2nd period scoring just 1:04 into the period.  The Bears then would score 3 unanswered goals with Sara Chute, Alex Lovaas and Carly Bullock scoring to give them a 4-2 lead.  Red Wing would cut the lead in half with a goal at the 13:52 mark as Emily Stegora would twinkle the twine beating Bears goalie Anna Kruessel.

With less than five minutes to play, Red Wing would cash in as the dominant Schammel would tie the score setting up  the game for extended time with overtime.  Both teams played hard in the first extra session with the Bears having a slight edge, outshooting the Wingers 6-3 in the first overtime.   The snake bitten Wingers, who have yet to beat Blake in five tries in state tournament games would get bit again, as the Bears leading scorer, Sophomore Carly Bullock ended the game with her fourth goal of the tournament.  Bullock would score for the 49th time this season, bring her team to the title game against first time entrant East Grand Forks.

The title match between the Blake School of Minneapolis and East Grand Forks has the defending state champion Bears playing against the tournaments top seed in the Green Wave.  Blake enters the game having played in four other state title games, winning all four, while East Grand Forks is a first time qualifier.  East Grand Forks defeated powers Warroad and the top rated team in the state Thief River Falls to qualify for the tournament and is battle tested setting up a solid title match.