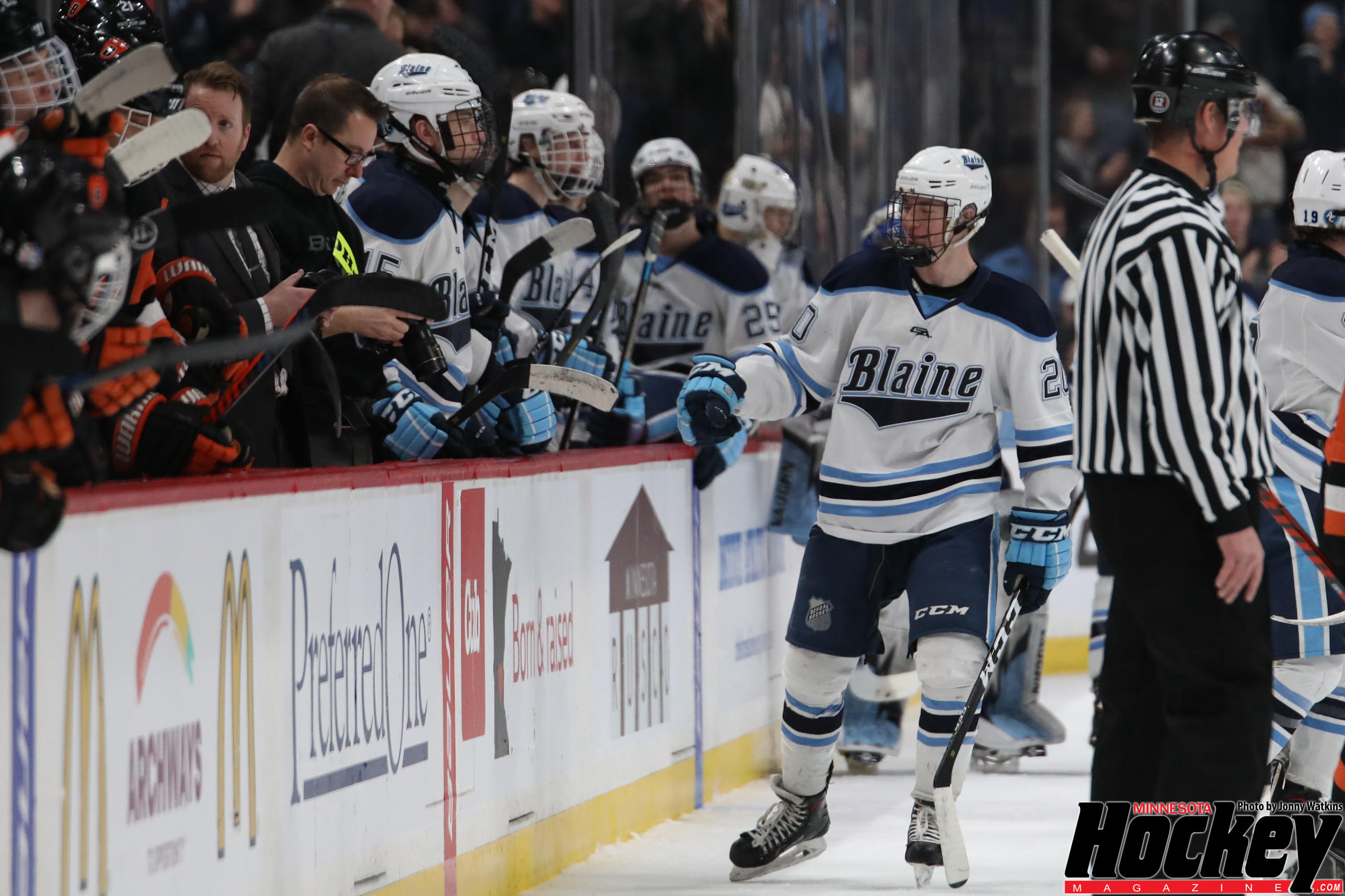 The No. 2 Blaine Bengals are moving onto the semifinal round at the state tournament after defeating the White Bear Lake Bears, 4-2.

Blaine’s top line is well documented. Between Carsen Richels, Bryce Brodzinski and Cole Hansen, the trio combined for 187 points in the regular season.

Brodzinski, who’s a Mr. Hockey Finalist, opened the scoring in the first period with a rocket from the slot. Something that runs in his family as his Dad and two older brothers, Michael and Johnny, were prolific shooters themselves.

“Well, my dad runs a shooting school,” said Brodzinski. “So everyday I have to go down there and help him out with it. He puts me through all of his drills. So it’s everyday shooting 200 pucks (really) helps out.”

Shorty thereafter, Hansen found the net twice and then Richels made it 4-0 in the second period to give the Bengals a commanding lead.

“It was huge, you’ve got to score goals,” said Blaine head coach Chris Carroll. “These three have been together ever since day one. Even in preseason scrimmages as we were trying to figure things out and that’s kind of their roles and we have other guys who are just as impactful. Certainly these guys are really good at scoring goals. We need them and we need everybody else.”

“Obviously it’s not a surprise to us,” said Richels of Hansen scoring twice in the win. “He does it all the time in practice, he’s a goal scorer. So I thought he got his two tonight and he earned them.”

White Bear Lake didn’t roll over though, they answered back with a pair of goals from Grant Hofeld and Sam Newpower to make it a two-goal game heading into the second intermission.

They also shut down the dominant Blaine scoring line after an adjustment between periods.

“We moved our orange line,” said White Bear Lake head coach Tim Sager. “Our white line was struggling today and we had to make that change and anytime they were coming on we tried to match that younger line against them. We knew it was going to be a battle between those guys. You give them an inch, they’re going to take a mile.”

Unfortunately, the Bears weren’t able to tie things up. They had plenty of chances including two power-play opportunities but couldn’t convert on either.

“It’s a little disappointing, but our guys didn’t mail it in,” said Sager. “We had some great chances. If we could’ve gotten a couple of power play goals… we knew exactly what they were going to do.”

With the win, Blaine will play the winner of Lakeville South and Eden Prairie in the semifinal round on Friday.