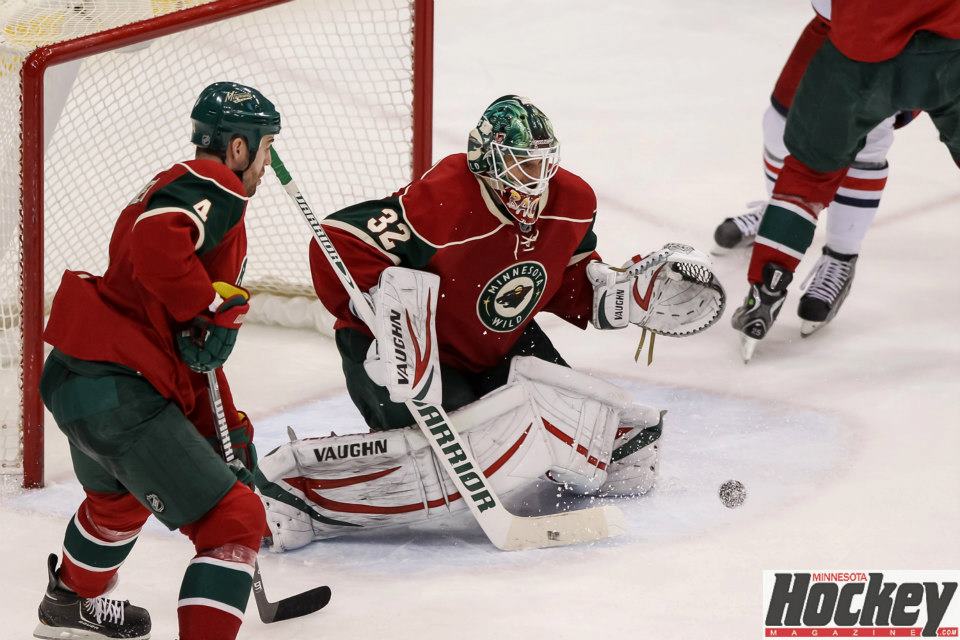 Minnesota wins the game but loses Josh Harding to injury. 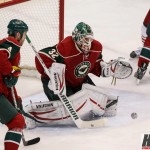 The Minnesota Wild outlasted the Carolina Hurricanes to pick up a greasy 3-1 win Thursday night at the Xcel Energy Center. A pair of first period goals held up as the Wild fended off a gritty Hurricane team to remain unbeaten at home (4-0-2).

Confidence has been growing in Mikael Granlund’s game and he delivered a terrific feed from the end boards to a waiting Nino Niederrieter who slapped the puck home past Carolina goalie Justin Peters at 8:21 of the first period. The goal came right after Granlund had made a terrific move that forced starting goalie Cam Ward to tweak a muscle in his lower body. Ward immediately left the ice and gave way to Peters who was forced to enter the game cold.

“It wasn’t the game we wanted, we didn’t play our best I don’t think.” South St. Paul native and Hurricane defenseman Justin Faulk said. “At the same time, Cam (Ward) went down and you don’t like to see that ever with anybody. I did think Petey (goalie Justin Peters) came in and played well for us. He gave us a chance to win and that is all we ask from him.”

The Canes did not have a game since last Saturday and were caught with a Wild surge in the first period that included Zach Parise’s fifth goal of the season at 11:55. He went to the net as Jared Spurgeon rung a shot off the cross-bar and on Parise’s way to the net, he swatted the rebound with the puck bouncing off Eric Staal and past Peters for the 2-0 lead.

“They played us really well. They were in our face in the neutral zone the whole game. They made it tough on us and on top of that, we didn’t have our best game,” Parise said. “At the end of the day we’ve lost some that we deserved to win and now it’s nice to be on the other side of one that we didn’t play our best.”

Minnesota was not overly thrilled with the first period, yet held the 2-0 lead and they would be less impressed with their effort in the second stanza. The Canes found their game in the second period and were able to cut the Wild lead to 2-1 on a gorgeous power play goal off a one-time feed to Alexander Semin by Eric Staal. The goal was Semin’s 3rd of the season.

“No excuses, it’s part of the game and I thought our guys responded really well,” Carolina coach Kirk Muller said of his unannounced goaltender change and subsequent 2-0 deficit. “I thought they stayed to the game plan and we knew the first period was going to be hard because we hadn’t played in a few days and get our legs. We got going and I thought in the second we took over and gave ourselves an opportunity in the third period.”

Missing to start the third period was Wild goalie Josh Harding who gave way to Nicklas Backstrom, playing for the first time after missing seven games with a strained knee.  Harding left with an undisclosed injury. Backstrom turned aside all seven shots in the third period and was able to preserve the Wild win.

Entering the game on the back end of a Hurricane power play, Backstrom was baptized by fire but was able to keep Carolina at bay. ‘It’s hockey, you can’t really pick and choose what happens there, you have to be ready no matter what happens,” Backstrom said. “You can’t hide behind any excuses, just go out there and try to help the guys.”

A sigh of relief could be heard from Wild wing Dany Heatley as he added an empty net goal at 19:34 of the third period to give the Wild breathing room to close out the game. The goal was his first of the season in 11 games.

The Wild did not play their best and for shot clock watchers, were outshot 28-27 and won. Josh Harding was solid in goal for two periods, left with an injury giving way to Nicklas Backstrom who was perfect in relief in his first outing in seven games. Mikael Granlund continues to improve his game as his confidence level has been noted in this space. Meanwhile, the Wild still have only given up five even strength five-on-five goals this season and got by without defenseman Jonas Brodin and his 26 minutes on the blue-line. The Chicago Blackhawks are next as the Wild travel to the United Center for a game Saturday. The two teams will face-off on Monday at the Xcel Energy Center to complete the home-and-home series