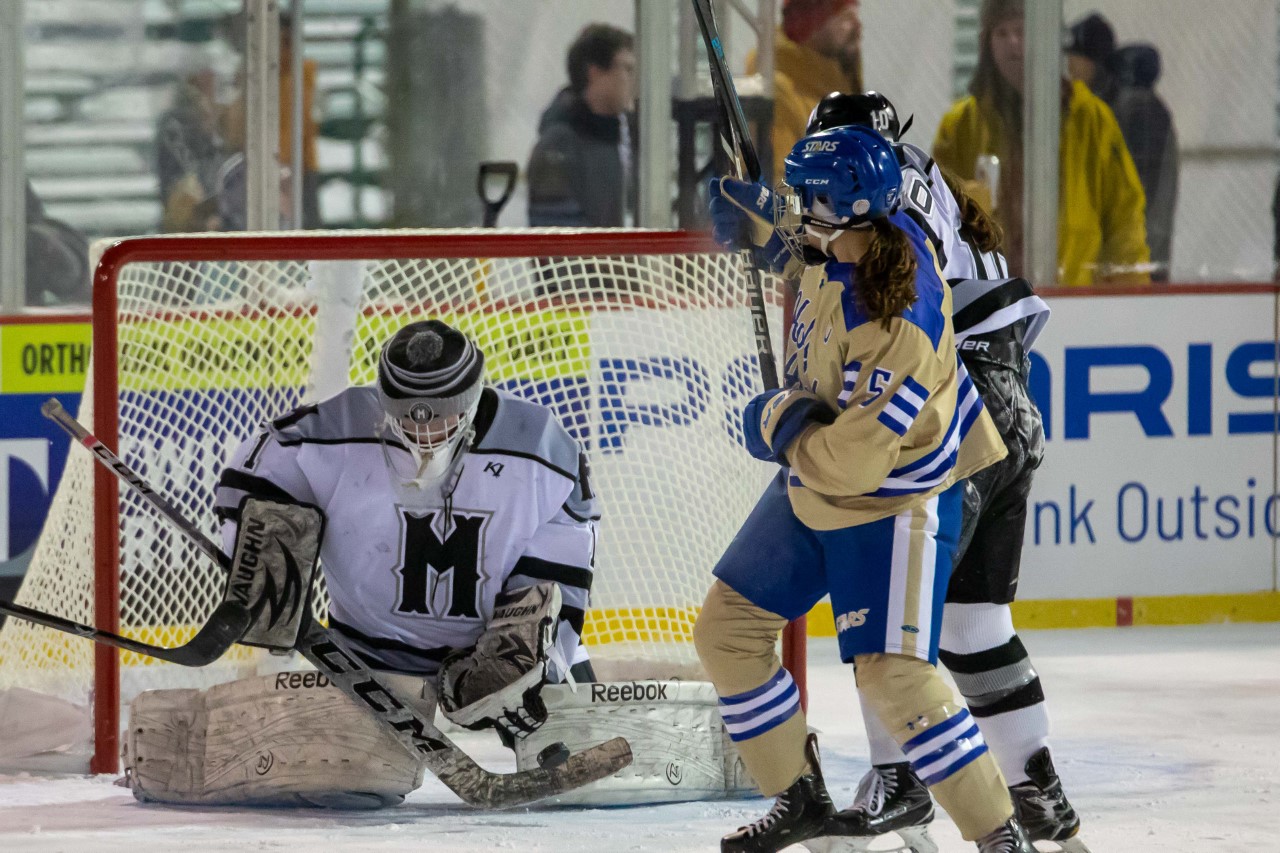 Minneapolis goaltender Molly Taylor makes one of her 16 saves as the Hockey Day hosts opened the weekend's events with a 3-2 overtime win over the Academy of Holy Angels Stars on Thursday night at Parade Stadium in Minneapolis. (MHM Photo / Jonny Watkins)

MINNEAPOLIS — The scene felt like something you would see on TV, or perhaps in a video game.

The 14th Hockey Day Minnesota debuted in style in Minneapolis, and the sight was something to behold.

A rink was built into historic Parade Stadium, with the downtown Minneapolis skyline looming in the distance. And with temperatures hovering around 0 degrees, it felt like the quintessential Minnesota experience.

“It was unbelievable,” said Blake girls senior Adelaide Burton. “Leading up to this all week, [the anticipation] had just been building and building

“Being able to see the ice and the city in the background is truly a dream come true,” Burton added. “I could not have asked for better conditions.”

Added Minneapolis girls freshman Celia Midtbo: “It was different, everything felt different. But it also just felt like playing hockey outdoors with your friends.”

The three-day showcase kicked off Thursday night with a pair of girls high school games.

Minneapolis and the Academy of Holy Angels squared off in the opener, with Minneapolis claiming a 3-2 overtime win in Metro West Conference play.

With the teams tied at 2, Midtbo scored on a wraparound try that somehow squeaked through Holy Angels goalie Celeste Rimstad.

“I won the puck and just came around the net,” Midtbo said. “I just threw it [at the net] hoping for the best. Then I just screamed … it was huge.”

Said Minneapolis coach Sarma Ozmen: “She has an amazing shot. She’ll say she just threw it at the net, but I have a feeling she aimed for something.”

Bridget McGuire and Kaitlyn Kneeland scored for Holy Angels, while Maddy Helmstetter and Julia Stevens scored power-play goals for Minneapolis, which improved to 10-9-2 on the season. Holy Angels fell to 7-12.

Ozmen said she could tell her team was a bit in awe of the atmosphere at first.

“The atmosphere was great … I think we had nerves for the first five minutes or so but then we settled in and were fired up that it was a real hockey game,” Ozmen said. “I had to turn around and see the skyline a few times just to make it real with where we’re at.” 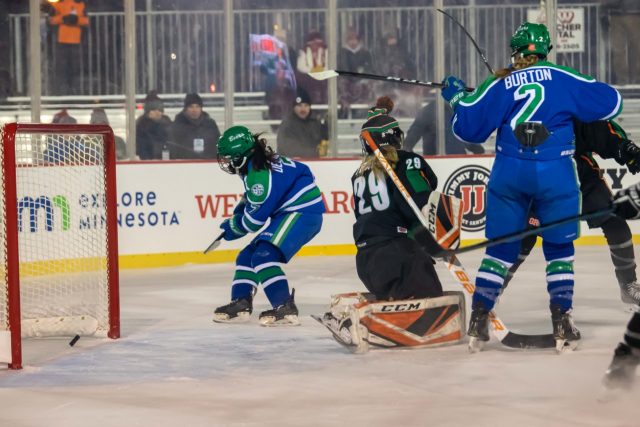 Blake senior Lily Delianedis scores the first of her three goals in the Bears’ 8-0 win over Grand Rapids/Greenway on Thursday night at Parade Stadium to complete a sweep for the co-hosting schools on opening night of this weekend’s Hockey Day Minnesota festivities in Minneapolis. (MHM Photo / Jonny Watkins)

Blake wasn’t fazed by the impressive scenery in the nightcap, as the Bears cruised to an 8-0 win over Grand Rapids-Greenway.

Burton led the way with a hat trick and an assist, while senior Lily Delianedis also recorded a hat trick for the Bears.

Each player scored a shorthanded goal in the opening period, before Burton scored twice and Delianedis found the net again in the second period.

“It’s starting out fast and finishing on your chances,” Burton said of the shorthanded tallies. “But I’ve got to give it to our team … we played three full periods.”

Added Blake coach Sean Reid: “Those two have had a bunch of those this year. They’re able to pounce on the puck, see the opening and get those chances.”

Freshmen Elizabeth Morrison and Sam Broz later scored in the third period before Delianedis capped the scoring with her hat trick.

Blake is now 12-5-1 on the season, as goalies Molly Haag (two periods) and Ava Christie (final period) combined for the shutout. Grand Rapids-Greenway dropped to 8-9-2.

But the Bears will certainly remember this win, especially because of the atmosphere it came in.

“Being able to do this on a night like tonight,” Burton said, “it brought our team that much closer.”