Minnesota’s underrated hockey rivalry with St. Louis is more than a half century in the making 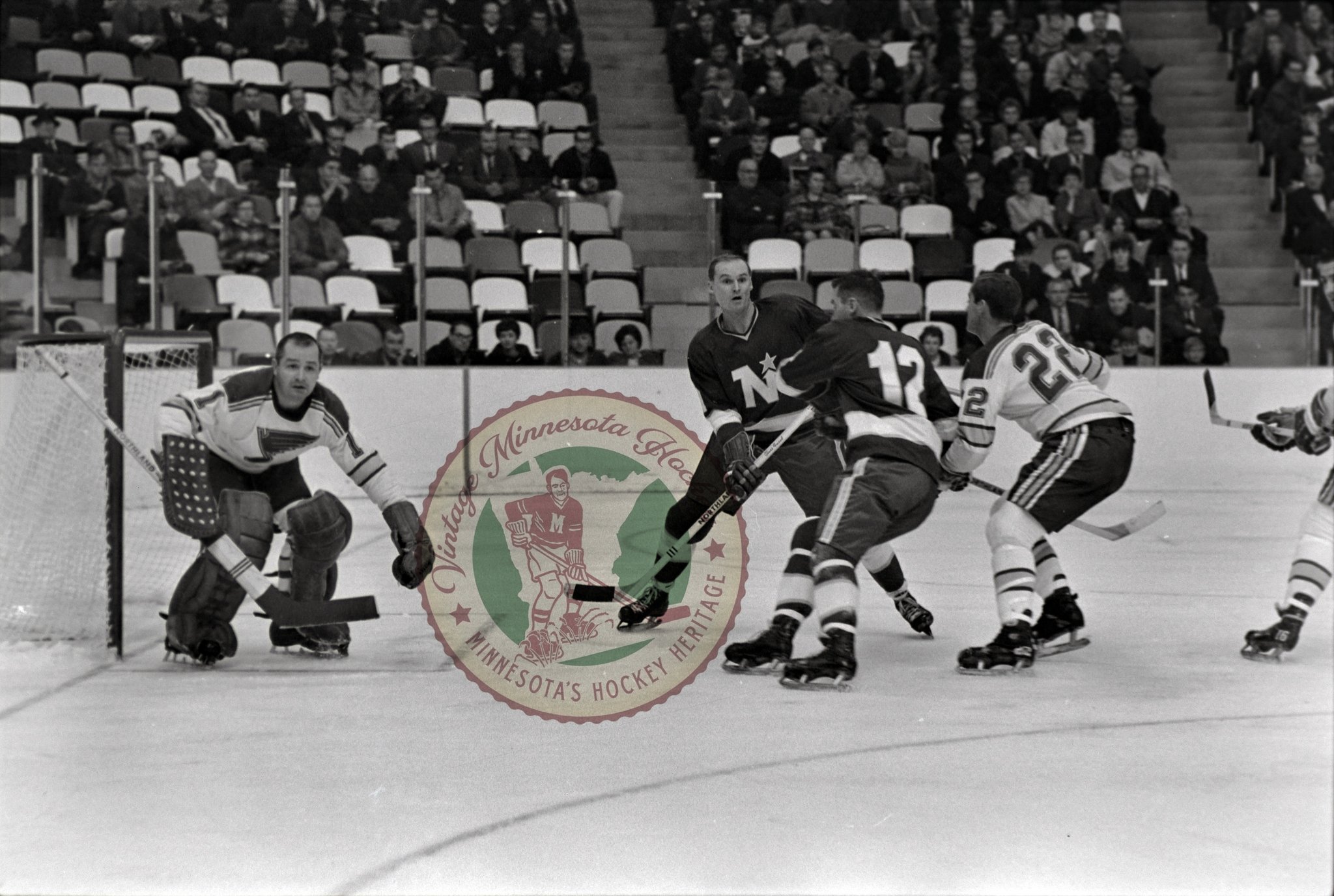 The Minnesota North Stars played their second ever home game at newly-opened Met Center on Oct. 25, 1967 vs. the St. Louis Blues. Hall of Fame goaltender Glenn Hall's 27 saves were not enough in Minnesota's 3-2 win. (Photo courtesy of Vintage Minnesota Hockey.com)

The hatred that developed between the North Stars and Chicago Blackhawks in the 1980s might lead many to assume there is no debate about the Stars’ biggest rival during their 26 years in the state. But long before the Blackhawks had Minnesota fans seeing red, and Al Secord became the most hated man in Met Center, the North Stars’ greatest dislike was reserved for the St. Louis Blues.

Reid will be in the home radio booth on Saturday at Target Field to serve as analyst for the Wild-Blues game in the Minnesota Wild’s first-ever appearance in the Winter Classic. While there isn’t much animosity between the Wild and Blues, this matchup is a nod to the history that dates to Minnesota’s first NHL entrant. 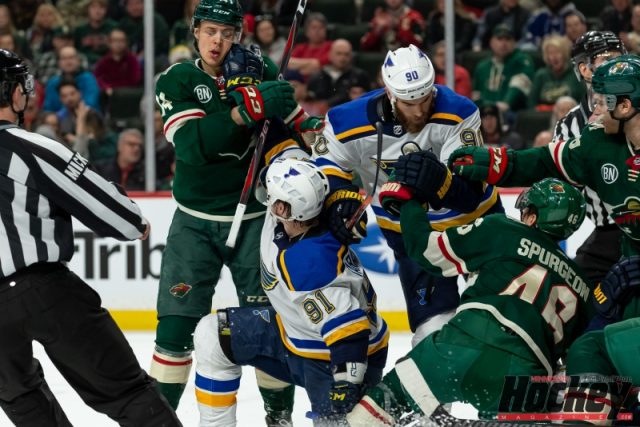 The Wild already faced the Blackhawks in an outdoor game in February 2016 that was part of the Stadium Series at TCF Bank Stadium on the University of Minnesota campus. The NHL considered a few potential opponents for the Wild before deciding on the 2019 Stanley Cup champion Blues.

“I thought it was a no-brainer,” to pick the Blues for this game, former North Stars defenseman and general manager Lou Nanne said. “You have to remember, (the Wild) did play Chicago in an outdoor game and Chicago has played so many outdoor games. That nullified them. St. Louis hasn’t had as many, and the Blues have been our natural rival for so long. It’s building up now (with the Wild), and older fans still remember that rivalry with the North Stars.”

The Wild and Blues have been in the Central Division together every season but one since 2013, when the NHL realigned divisions. The exception came last season when Minnesota and St. Louis were both in the West Division as part of a one season shift caused by the pandemic. The Wild and Blues have met twice in the playoffs. The Wild won in six games in the first round in 2015 before being swept by the Blackhawks, and St. Louis knocked out the Wild in five games in the opening round in 2017.

While the Blues were well established by the time the Wild entered the NHL in 2000, St. Louis and the North Stars both came into the league in 1967 as part of the six-team expansion that doubled the number of teams in the league to 12. Both were in the West Division, which housed all the new clubs and provided a clear path to the Stanley Cup Finals for the first few years. 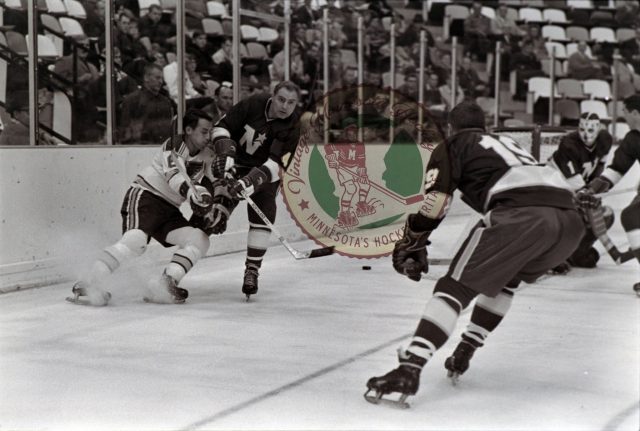 The Blues-North Stars rivalry was immediate as the teams met in the playoffs four of their first five seasons. Minnesota, which played to a 2-2 tie against the host Blues in its first-ever game on Oct. 11, 1967, lost to St. Louis in seven games in the 1968 semifinals (second round) after eliminating the Kings in the first round. Four of the games went into overtime, including the deciding one. Ron Schock’s goal 2:50 into the second overtime at St. Louis Arena gave the Blues a 2-1 victory.

“That’s the one that stands out because we were a better team than them that year,” Nanne said. “We had more points (86 to 67) and they just grinded it out. … I’ll never forget it because the arena just went quiet and then it was over.

The Blues’ earlier playoff success enabled them to reach the Stanley Cup Finals in 1968, ’69 and ’70. They were swept by Montreal twice and Boston the final time. Reid was traded to the North Stars from the Blackhawks in February 1969, so he was around for three of the four series. He recalls how differently the rosters of the two teams were constructed.

“When expansion came about, the Blues went after more (veteran) players because they wanted to be in the playoffs right away,” Reid said. “They had guys like Glenn Hall (who was 36) and Al Arbour (who was 35) and all of these older guys, where Minnesota had a much younger team. It was not a situation where it was even on experience, but there was a great rivalry over the years.”

What’s interesting is that while North Stars fans hated the Blackhawks, and vice versa, they also saw plenty of the Blues in the playoffs during the ’80s and into the ’90s. All three were in the Norris Division in a time where the playoff matchups remained within the division until the conference finals. While Minnesota and Chicago met six times from 1981 through 1991, the Blues and North Stars met five times. The North Stars were 2-4 in the series against the Hawks and 3-2 against St. Louis. The North Stars ousted both teams during their surprising run to the 1991 Stanley Cup Finals.

“I think it was,” a really good rivalry, said former North Stars defenseman Brad Maxwell, who played for Minnesota from 1977 until December 1984 and then for 17 games in the 1986-87 season. “St. Louis had so many good players, and had a lot of players who had been in the Western Hockey League. I played against those guys in juniors. The games were intense. We didn’t have really big brawls  or one guy you hated like Secord. But it was really good hockey. Intense and physical.” 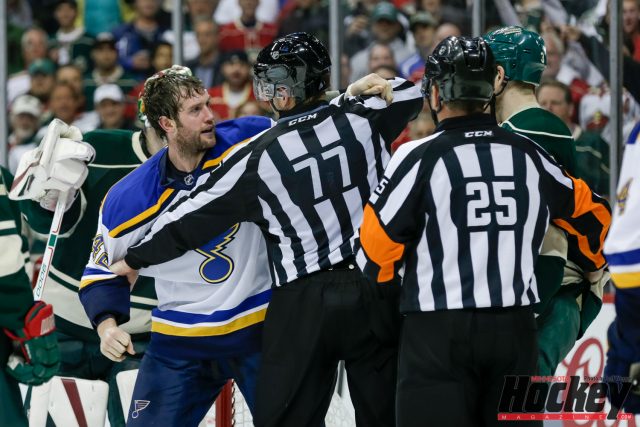 While the Minnesota/St. Louis hockey rivalry may not be remembered for the vitriol of others, there have been moments like this exchange between Blues forward, and Minnesota native, David Backes and the Wild’s Charlie Coyle in am April 20, 2015 playoff clash at Xcel Energy Center, won 3-0 by Minnesota. (MHM Photo / Jeff Wegge)

One of the most intense games came in Game 7 of the Norris Division Finals in 1984 at Met Center. This time the North Stars came out on top. Mark Reeds silenced the crowd when he scored with 5:54 left in the third period to give St. Louis the lead, but Willi Plett tied it 15 seconds later with a 75-foot blast that beat goalie Mike Liut and the North Stars won when Steve Payne scored six minutes into overtime.

“That was huge,” said Nanne, who was North Stars GM by that time. “It was a tough series and tough rivalry. We had come off of some pretty good years. … It took a long time to get that win back (against St. Louis). It seemed like the Chicago rivalry was taking over, but when we played St. Louis it was like old times getting back at one another.”

Maxwell said he would have embraced the opportunity to play in an outdoor game with the North Stars. Maxwell and many of his former teammates, along with some alumni from the Wild, faced the Blackhawks alumni back in 2016 in a game that was part of the lead up to the Stadium Series.

As much fun as that Stadium Series game might have been, the Winter Classic is much bigger. The idea for an NHL outdoor game began in 2008 with the New Year’s Day game between Pittsburgh and Buffalo at the Bills’ Ralph Wilson Stadium. Delayed a season by the pandemic, the Wild and Blues will start in the evening (in order to avoid issues with the sun) and will be the first televised as part of the new NHL TV package with TNT.

And the opponent can make it even better.

“St. Louis has been a Cup winner in the last few years and has marquee names that are attractive,” Nanne said. “Kirill Kaprizov (of the Wild) and Vladimir Tarasenko (of the Blues) are two big names. When they announced the Wild was getting this game, I didn’t think there was any other team they would play. It’s a very good matchup and an attractive one for fans. I think the NHL was very wise in picking them.”