A Game to Remember 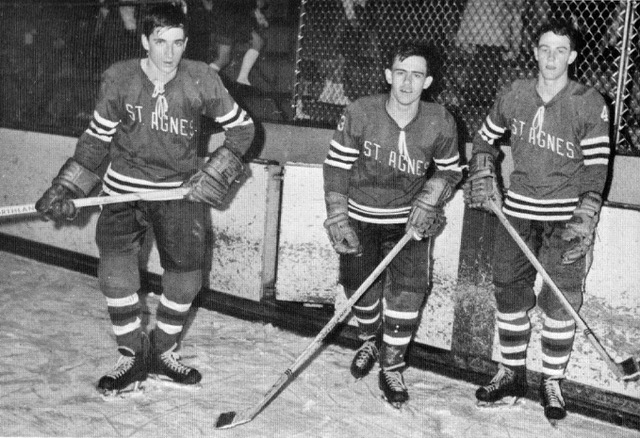 Guest contributor, Jim Morin, recalls the close game with one of the best high school teams in Canada.  As the Buzzers from Toronto, a Catholic high school in Ontario, methodically dismantled both public and parochial high school teams in Minnesota in the late 60’s, little St. Agnes pushes back in a game for the ages.  Photos provided by Jim Morin.

Can a loss still be a win? 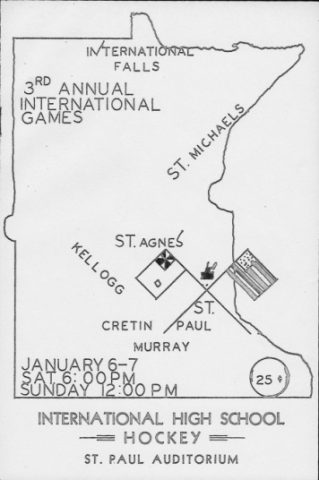 That’s how the St. Agnes Aggies High School hockey team from St. Paul, MN, felt in 1968 after “The World’s Greatest High School Team”, the Buzzers from St. Michael’s of Toronto, Canada, beat them 2-0.

In 1968 Canada was so dominant in hockey that 96% of the 313 players on the 12 NHL teams came from Canada, versus only 2% (6 players) from the USA.  St. Michael’s College School was a storied Toronto institution offering grades 8-13 for over 833 boys.  The Buzzers played as a Junior B team and had churned out over 120 professional hockey players by 1968, with many more since.

The much smaller St. Agnes High School had a total enrollment of 528 students with about an even mix of boys and girls.  But that year St. Agnes was mighty in hockey, with a 10-0 record that would grow to 21-2 at year’s end, their only other loss being in the Parochial State High School Tournament Championship game.

This story is inspired by the 50th anniversary of the Buzzers versus Aggies hockey game played on January 7, 1968, recalling how a small school from St. Paul stretched to reach competitive stature with the Canadians.  Despite losing the game to the better team, the Aggies whole-hearted play helped show the way for future USA players to compete with the best and develop much further into the collegiate and professional ranks.

This was not the Buzzer’s first trip to St. Paul

St. Michael’s is under the direction of the Basilian Fathers.  In 1966, they got together with the Brothers of the Christian Schools who direct Cretin High School in St. Paul, and a hockey game series idea was born.  The Buzzers were so deep and talented that they nonchalantly signed up to play a leading public high school on Saturday and two leading parochial schools on Sunday, back to back!

Two games on the same day was not a problem for the Buzzers as they were accustomed to NHL style rules for checking all over the ice, 20-minute periods and playing 47 games a year, later cut back to 36 games for 1968.  When they arrived in St. Paul they were already 16-4-3 in their Junior B League.

In contrast, Minnesota high schools at that time only played about 20 games a year.  Checking was only allowed in the defensive zone from the red line back.  The change from 12-minute to 15-minute periods occurred for the private schools in 1968 and was authorized for public schools in 1971.  The rule expanded to 17-minute periods in 2003.  So, at that time, the Buzzers would have three times the annual amount of game ice-time experience as MN high school players.

The first two trips to St. Paul in ’66 and ’67 were mostly uneventful as St. Michael’s beat Hill and Cretin by scores of 13-0 and 4-0 the first year and won in closer games by two goals each game the following year.

The next day, Sunday afternoon’s opening game was St. Michael’s versus Cretin High School.  The Buzzers had no trouble with Cretin, firing 40 shots on goal and easily winning 5-0.

As the 7,000 fans settled into their seats in the St. Paul Auditorium in downtown St. Paul, the stage was set for the marquee game of St. Michael’s versus St. Agnes.

The next day’s newspaper called it “the best high school hockey game in St. Paul this season.”

St. Michael’s had advantages in both depth and age, using three lines, five defensemen and two penalty killers, and had six of their seventeen players already age eighteen.  St. Agnes had only one eighteen-year old and planned to skate just eight of their key players – three defensemen and interchange five players on the lines.

St. Agnes’s coach, Don Joseph, could only offer a strategy to play a very physical game.  “I told them to get out there and hit them, out-check them, out-muscle them, get all over them.  They did and played their best.  We had to play the body, which was the only way we could slow them down.  Our defensemen did a fine job and the wings back checked well too.”

Joseph’s strategy was music to the ears of his defensemen.  The three key Aggie defensemen were Mike Mallinger, Jim Morin and Rory Anderson.  All three had two-way experience on the football team, with Morin at fullback/safety and Mallinger and Anderson at offensive/defensive tackle, so physical contact with size was no problem.

Jerry O’Connor at center led St. Agnes with 16 goals and 13 assists, with Larry Doyle and Ken Gese on the wings.  St. Michael’s first line of Larry Fullan, John Noble and Brian Galbraith had amassed 118 points in 21 games, with Fullan accounting for 30 goals and 30 assists.

Nine of the Aggie seniors had been skating together on the high school team since their sophomore year.  They were confident playing as a team, but facing the intimidating Buzzers for the first time caused them to grip their sticks a little tighter on the opening faceoff.  When the puck dropped, the very physical game quickly chased away any butterflies, as St. Agnes “smashed the Buzzers at every turn, knocking them on their backs or splattering them against the boards.”  St. Mikes fought back just as hard, as it seemed to not make a difference on how hard they were hit, they kept coming back for more.

For two and a half periods the teams battled evenly back and forth.

O’Connor and Gese thought the Aggies had a goal only to have it called off for a man being in the crease.  And a bullet shot from Mallinger clanged harmlessly off the pipe.  “There were some shots I was sure would go in, but they didn’t”, said Aggies Coach Joseph.

The Aggies learned some new tricks from the Buzzer’s Canadian hockey heritage.  For example, the Buzzer’s response to being checked often was to give the opponent a “face wash”, rubbing their smelly glove in the checker’s face. 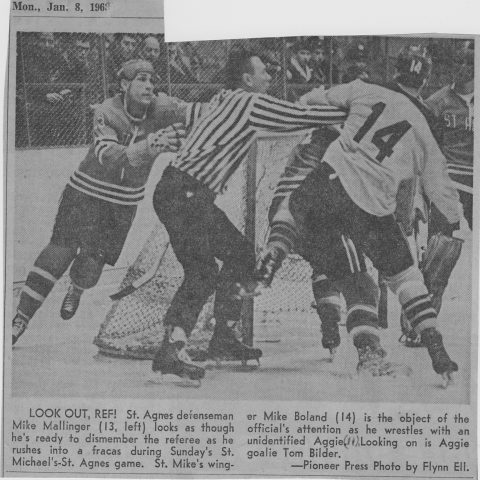 Action Photo in the Pioneer Press

Morin was face washed near the end of a period and spent the entire time between periods trying to relocate his contact lens from the upper reaches of the eyeball down to where it belonged.  Instead of relaxing and eating oranges he could only stand in front of a locker room mirror, with sweat pouring out of every part of his body, trying to coax the contact lens in place.  Fortunately, by the time the Zamboni finished its duties, the contact returned safely to the correct position.  The next period St. Agnes just hit them all the harder – with gloves up too for protection if necessary.

The turning point came midway through the third period when the Aggies’ Morin (hidden in the picture above) and the Buzzer’s Boland got mutual penalties for a tussle in front of the goal.

With both teams playing only four skaters, the additional open ice worked to the Buzzer’s skating advantage and Paul Regan scored their first goal. Fifty seconds later they added an insurance goal by Larry Fullan.

The final moments were a blur as St. Agnes pulled their goalie Tom Bilder with 42 seconds left and St. Michael’s a man short.  The biggest difference turned out to be the Buzzer’s goalie John Marks as he stopped almost sure-thing goals and withstood the final flurry.   Although each team ended up with 19 shots, Marks stopped them all.

“I would have been happy with just one goal, it was an exciting game.  They laid a lot of weight to us.  St. Agnes sure was up, and Mallinger showed he could play on any of our Junior B’s in Toronto,” said St. Michael’s coach Vic Sluce.

A hint at USA hockey evolution?

St. Agnes deployed a tough, physical game to counter the Canadian’s speed.  This technique proved to be necessary and a good bridge to the future but was not a sufficient strategy for long term success.  This game showed that better skating ability was needed to be more competitive.

For example, Bobby Orr from the Boston Bruins was entering his second year of play in 1968 as he went on to completely change the way hockey, and defense in particular, was played.  Typically, defensemen would stick to checking, passing and moving up only as far as the opponent’s blue line.  Orr added offensive mobility to defense as he gracefully skated all over the ice and brought the puck up on rushes.

The shift to emphasizing skating was never more apparent than with the USA Olympic success at Lake Placid in 1980.  Herb Brook’s style of play emphasized skating along with hitting to stay with the Russians and to win the Gold Medal.

Another measure of this progression is that today, in 2018, 26% of the players on the 31 NHL teams are now from the US.   A poetic measure is that Tom Younghans, an Aggie freshman on the 1968 team, went on to become a hockey standout at the University of Minnesota, and played seven years in the NHL.

On January 7, 1968, the team from Canada did what they were expected to do and won the game.  However, St. Paul’s St. Agnes team played a transcendental, hard fought and mostly even game, showing that future Minnesota and USA talent could rise to the Canadian level of hockey play.

1968 was the last trip the Buzzers made to St. Paul.  St. Michael’s and St. Agnes played arguably one of the greatest games between Canadian and USA high schools as they battled each other to the end for the sheer fun of playing hockey. 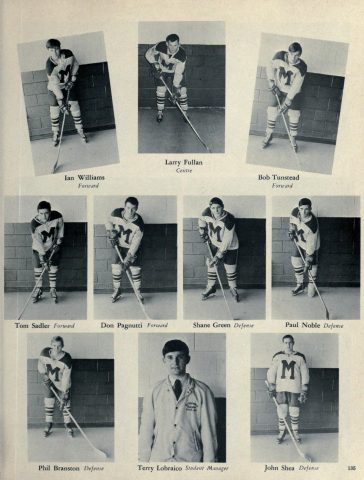 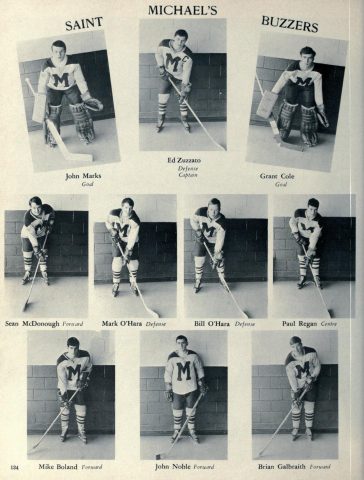 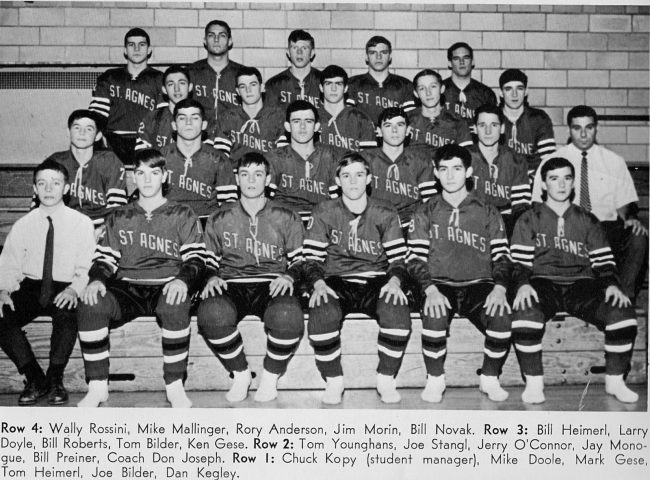 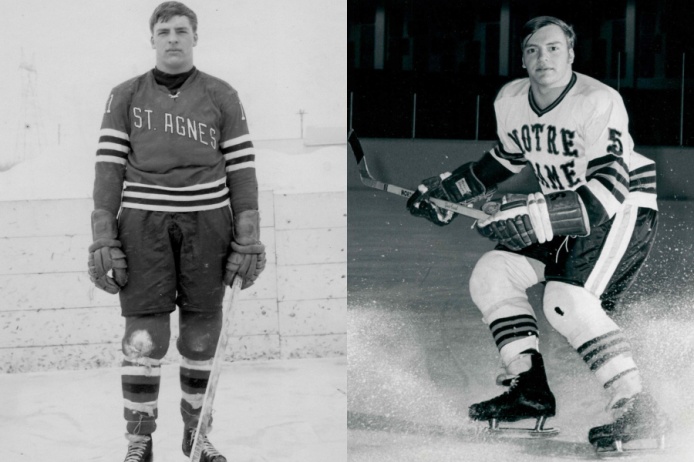 Morin started playing hockey at age five on St. Paul’s Como Lake.  After St. Agnes High School he played for two years at the University of Notre Dame.  For over ten years Morin coached his son and daughter in the Edina Youth Hockey system and continued to learn more about skating technique.  Morin is looking forward to skating with his grandchildren.