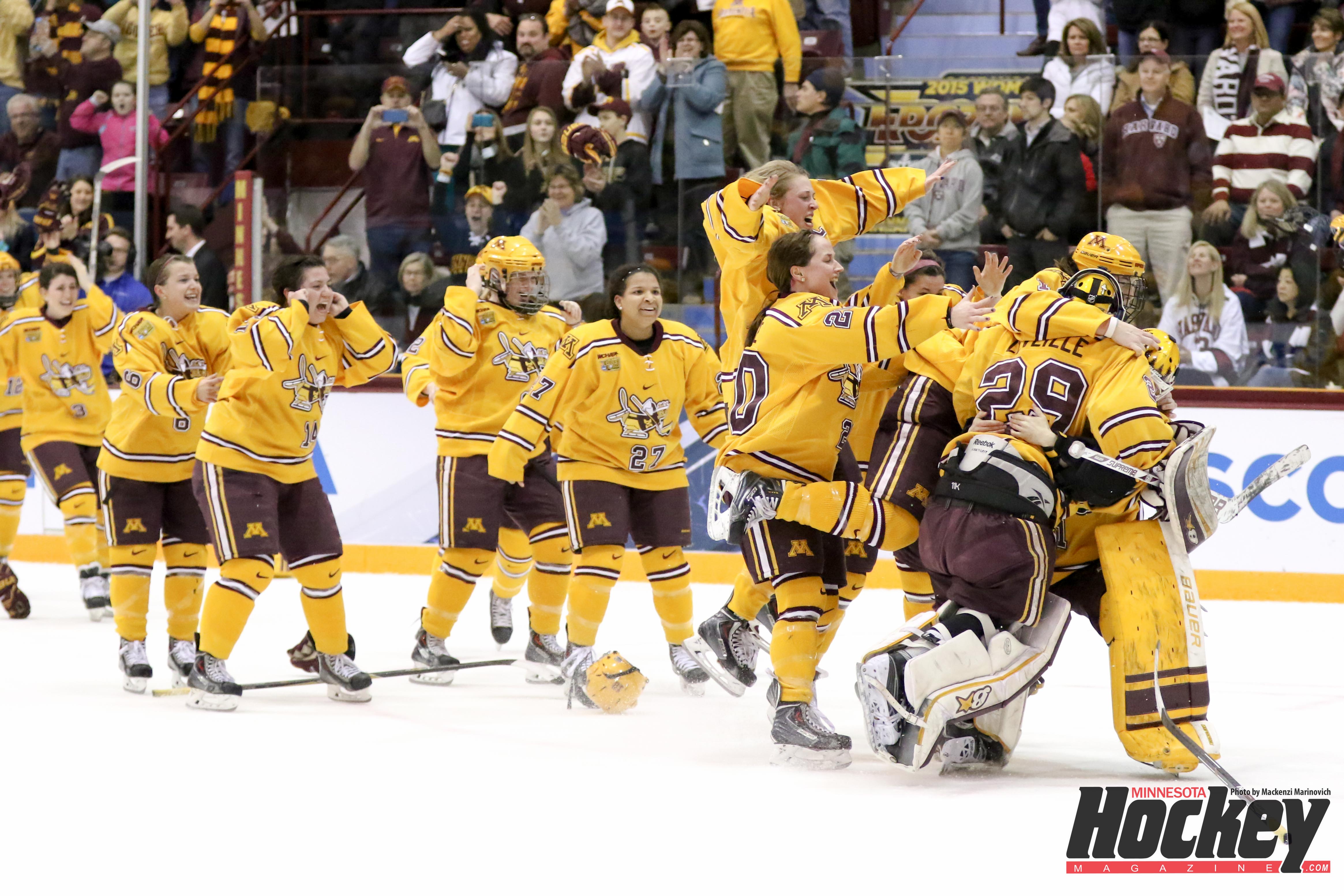 Minnesota goaltender Amanda Leveille is mobbed by her teammates after she stopped 19 Harvard shots in the Gophers’ 4-1 win over the Crimson in the Frozen Four championship game on Sunday afternoon at Ridder Arena. (MHM Photo / Mackenzi Marinovich)

Minneapolis — There is no question that Minnesota is the “State of Hockey” in women’s hockey, too.

The University of Minnesota stopped Harvard 4-1 in front of a full house of 3,400 at Ridder Arena Sunday afternoon, giving the Gophers their third NCAA title in four seasons and their sixth national title overall.

Gophers coach Brad Frost – who joked that he was attempting to launch a tradition by cutting up the hockey nets for mementos for the first time after the game the way it’s done in basketball – says he’s basically a bit mystified by all the success.

Frost, who has a seven-season record of 226-38-17 at Minnesota and a 146-10-7 mark over the past four seasons, took a seat at a postgame news conference next to captains Rachel Ramsey and Rachael Bona and shook his head.

“I don’t know how you explain what’s going on,” he said. “To have these two and Meghan Lorence and Shyler Sletta play in four national championship games in a row and to come away with three of them, I think it just speaks volumes to our team and our program and our players. We are so blessed.”

Minnesota teams have now won 10 of 15 championships since women’s hockey moved under the NCAA umbrella in 2001 – five by the Gophers and five by UMD, in addition to Minnesota winning the American Women’s College Hockey Association title in 2000.

Asked if the Golden Gophers have constructed a dynasty, Ramsey smiled mischievously and said she will leave that up to outsiders.

“I will say, I think what we’ve done is incredibly special and won’t happen again,” she commented.

The Gophers, who finished with a 34-3-4 record, outshot the Crimson 14-6, 11-8 and 8-6 over three periods for a 33-20 edge, got goals from Megan Wolfe, Hannah Brandt, Lorance and Bona to make the final difference appear much more lopsided than the way the game went.

“We had to play probably our most complete game of the year to beat Harvard,” Frost said.

It was 0-0 until late in the first period when Wolfe, a sophomore who has shuttled between forward and defense this season and came into the game with just two goals, ripped in a pass from Dani Cameranesi to make it 1-0.

“What a goal,” Frost commented. “That was a beauty.”

It appeared that goal might be enough because of the standout goaltending supplied by Gophers junior Amanda Leveille, who was relegated to backup status when Minnesota won the title two years ago and suffered a 5-4 loss to Colgate in last season’s title game.

“Tonight you could tell she was confident,” Frost said. “She made a couple of big saves early to allow us to settle in.”

Harvard (27-6-3) did not score until it pulled within 2-1 with just 4:54 remaining in the third period, but Lorence scored less than two minutes later and Bona added an empty-netter to lock things up.

Leveille, who made 34 saves to thwart Wisconsin in the semifinals on Friday, finished with 19 saves Sunday as well as a spot on the all-tournament team.

Brandt, who had a goal and two assists against the Badgers, was selected as the tournament’s most outstanding player, while Maryanne Menefee, Cameranesi and Wolfe were also picked to the team. Harvard defender Sarah Edney, who scored the Crimson goal, was the lone non-Gopher selected.

It didn’t hurt Minnesota’s cause, of course, that the game was played at the home of the Gophers, where they went 17-0-2 to end the season and have gone 130-6-5 in their most recent 141 games there.

Minnesotans, who are typically big supporters of the Gophers men’s team as well as the NHL Wild that coined the “state of hockey” term, dominated the crowd.

Before departing, Frost took one more stab at defining his team’s success, referring to things like culture and values. But he said he knew going into the final game that this has been an outstanding season for his players.