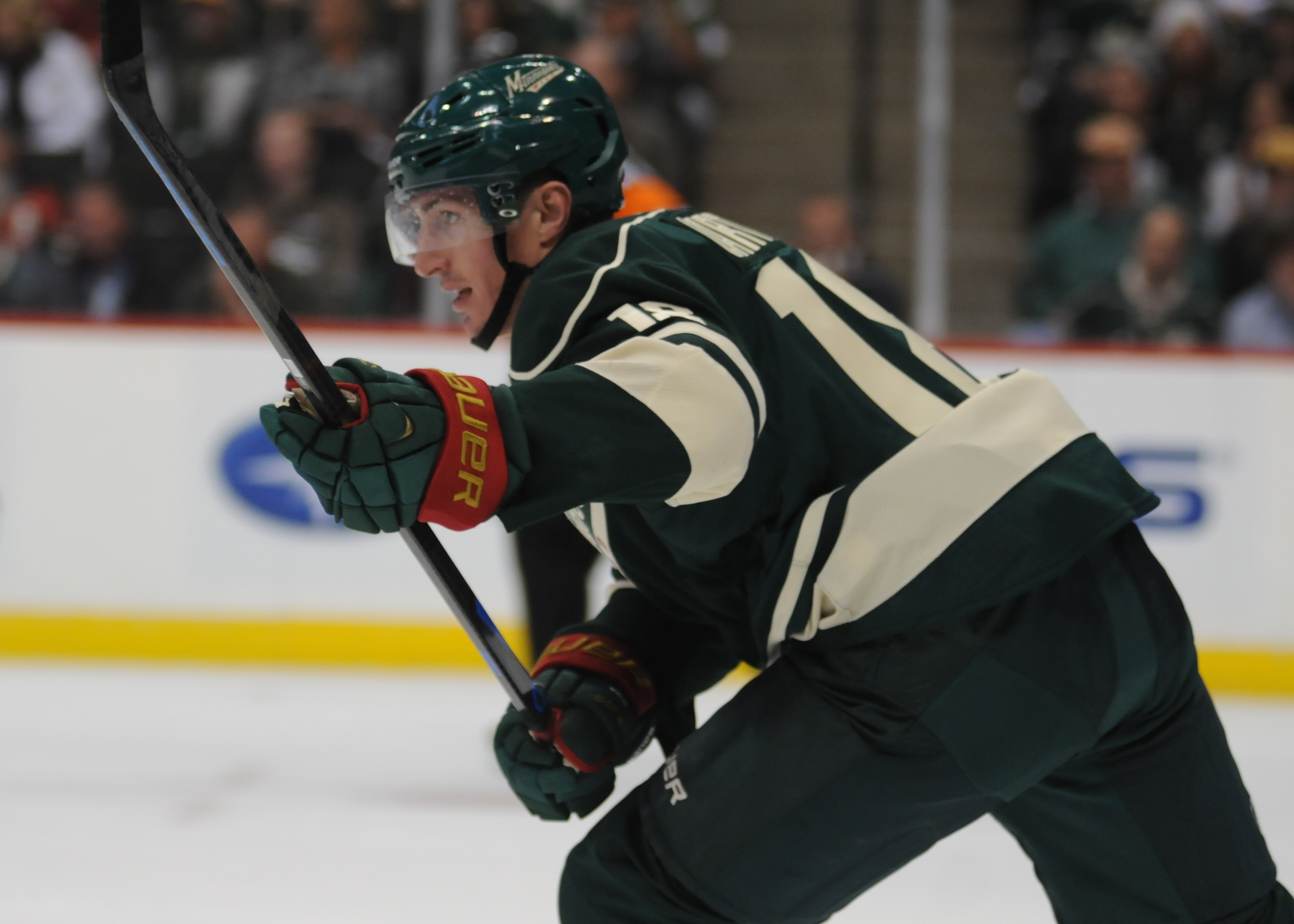 White Bear Lake native Ryan Carter made his presence felt in his first game as a member of his hometown team. (MHM Photo / Jordan Doffing)

No words were necessary to tell the story of Ryan Carter’s night.

A cursory glance at his face provided a sufficient summary of the White Bear Lake native’s Minnesota Wild debut in their season-opening 5-0 drubbing of the Colorado Avalanche on Thursday night at Xcel Energy Center.

From the beads of sweat pouring down his forehead passing over a fresh scar —a battle wound resulting from a second-period scuffle with Avs defenseman, and Bloomington’s own, Erik Johnson — to the boyish grin of a man who just played his first NHL game in his hometown as one of the good guys.

Preparing to play a regular season game with his new team just three days after signing a one-year, two-way contract with the Wild on Monday afternoon, the former Minnesota State University star’s game plan was a simple one.

“First game, new team, not fully aware of all the systems and everything so my goal was to just get out there and get into the game mentally, get a sweat going and feel it,” Carter said.

“It didn’t start the way I wanted with a minor penalty on my first shift,” Carter said. “But it settled things down for me and I went from there.”

Carter says his phone has been “buzzing pretty good” since Monday with family and friends welcoming him home but when asked if he reached out to anyone in particular after he signed, he explained he simply hasn’t had time.

“I haven’t been on the offensive with the phone at all,” said the 2002 All-State selection and Minnesota Mr. Hockey finalist for White Bear Lake Area High School. “It’s been all defense, you know, responding as much as I can.”

Only a handful of Carter’s immediate family members were in attendance on Thursday night, but the low-key approach was probably for the best considering the short span between his signing and opening night.

“It would have been easy to get wrapped up in all of the outside distractions,” Carter said. “But I tried to remain focused on what I had to do in here and learn the systems and figure it out and be ready to play tonight.”

Primarily a fourth-line player throughout his NHL career, Carter has accumulated 31 goals, 37 assists and 341 penalty minutes in 361 NHL games to go with 12 points (7-5—12) in 43 postseason games. He left MSU following his sophomore season in 2006, signing a free agent contract with the Anaheim Ducks, with whom he won a Stanley Cup a year later.

“Obviously, my eyes are gravitating towards him a lot because I’m still learning about him as a player,” Yeo said. “One of the biggest things that jumps out at me is, first off, he has a very good understanding of how he has to play the game and that fits very well with the identity that we need with the fourth line.”

The fourth line played well in the win and even generated several offensive opportunities, but more importantly, they played a critical role in shutting down Colorado’s high-flying corps of young forwards. Carter said the key was keeping their feet moving.

“It took away their time and space and they coughed some pucks up and that allows us to keep buzzing and generate some energy,” Carter said.

Carter, who signed with Minnesota after three seasons playing in New Jersey, was a teammate of Zach Parise’s when the Devils made their run to the Stanley Cup Finals in 2012. The two have remained friends and Parise praised Carter’s play Thursday saying his “getting involved, mixing it up” is something people will grow accustomed to seeing over the course of the season.

“He had a couple really good forechecks and protects the puck well,” Parise said. “He plays with a little bit of an edge — a little sandpaper — and that’s going to fit in real well with us.”

That sandpaper effect was evident midway through the final period when Gabriel Landeskog took a run at Carter in the neutral zone which resulted in a boarding call against the Colorado captain. Immediately after the hit, Carter’s new linemate Jason Zucker, not particularly well known for his physicality, went after Landeskog and was tagged for roughing.

Carter appreciated Zucker coming to his defense and said that’s what team toughness is all about.

“A guy takes a run like that and somebody steps up,” Carter said. “It’s not always about fighting, but you send a message any way you can and it’s a good thing to have in a teammate, a good quality.”

Even after one game, to say Carter’s new coach looks at him as a good, quality teammate wouldn’t be a stretch.

“The guy won every battle and that’s what we’re looking for are guys that take pride in those little things,” Yeo said. “He certainly looks like he’s going to be a guy that fits.”