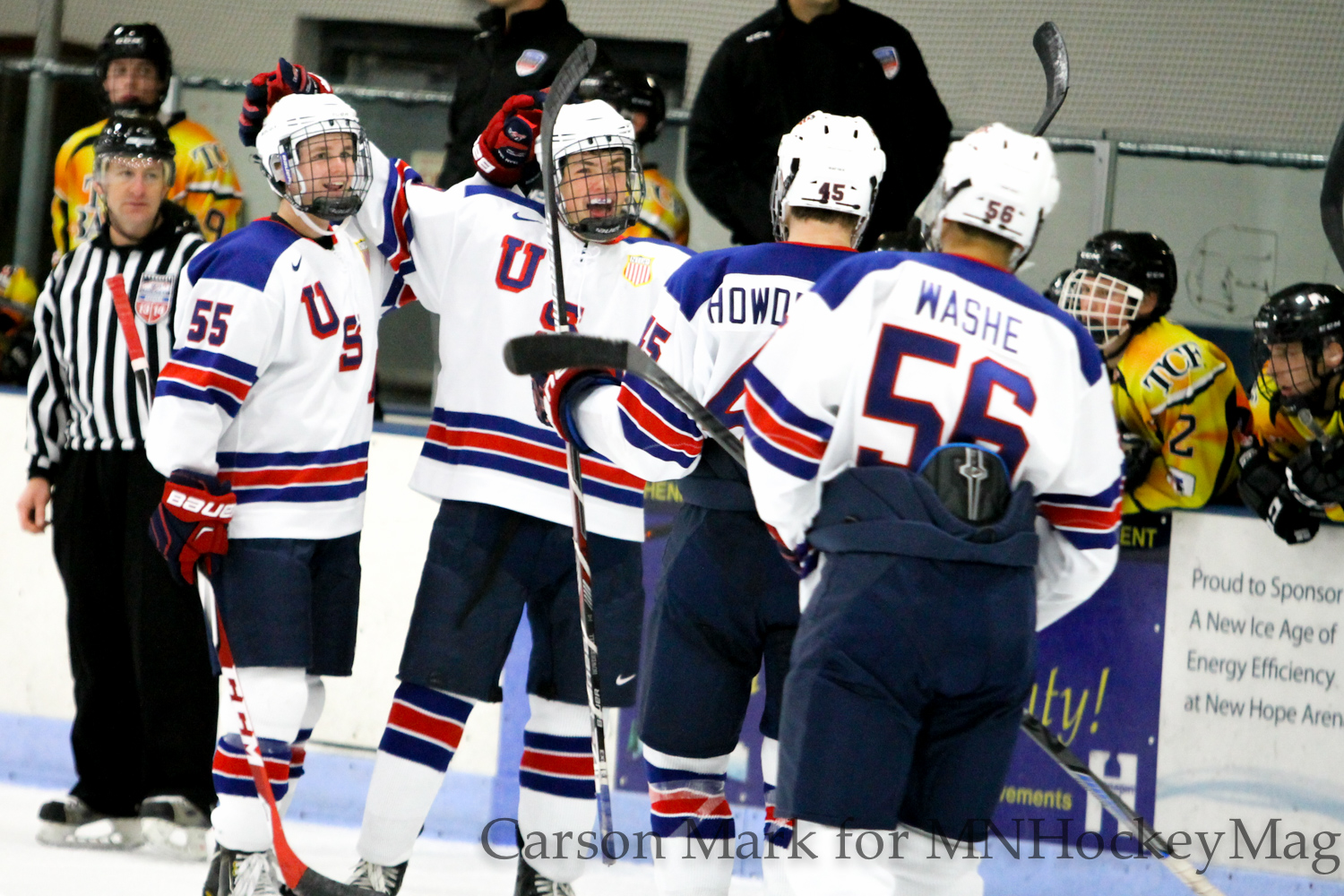 NEW HOPE – For the second time in two years the U.S. National Under 17 team paid a visit to the New Hope Ice Arena for the weekend. Saturday one of the games on the schedule was the U.S. team against Team Southeast from the Upper Midwest Elite League. Although the outcome was fairly predictable, it was clear the Minnesota kids were ready to compete with the caliber of kid they were facing.

Team Southeast looked like they had some trouble adjusting to their opponents’ superior size and speed and quickly fell into a 4-0 hole. After the initial shock however, they played the U-17 squad much better, ultimately falling 8-2 with a disallowed goal that Southeast put in the back of the net.

“The Elite League is critical to the future of Minnesota high school hockey,” a Florida Panthers’ scout said. “It gives the better players a way to extend their season. There are a lot of good teams and programs in the state, but the season is so short it is very tough to develop in that time span – especially when they are going to be playing against players across the nation and the world.”

Even though the Minnesota kids were not as advanced as the team they were competing against, the scouts were still watching.

“I don’t really care what the score is. I just watch particular guys and see how they react in different situations,” an Anaheim Ducks’ scout said.

“You are judging the Minnesota kids against some high level talent,” the Florida scout said. “That is a good thing. You are looking to see how they handle those (U-17) guys and different situations. “

“The Minnesota kids can see there are kids out there that are just as good as them or better,” said the Ducks’ representative. “If you strive to become an NHL player, these are the guys they are going to have to pass someday.”

Parents also see the benefit of having the kids play teams they might not match up well against.

“It helps developmental wise of course, but the moral grows when you play a team like this. They see they can stay with a team that plays all year round,” Samantha Lubbesmeyer, mother of Southeast goalie Dyllan, said.

“This is a good barometer for them,” the Florida scout said. “The U-17 guys get a chance to play against good quality high school players and play at their age group. “

“Everyone knows Minnesota high school hockey sets the standard for level of play at the high school level and it is a great opportunity for our kids to have an opportunity to play here and play the top level talent here in Minnesota,” Cole Vassel of USA Hockey said.

The U-17 organization likes what Minnesota has to offer their kids.

“There are a lot of great players here in Minnesota,” Vassel said. “You’ve got the Upper Midwest Elite League, it gives (the U-17 kids) an opportunity to play against some of the top level competition that they wouldn’t be playing against normally.”

“It is good for the 17’s,” the Ducks’ scout added. “They are always playing against older competition. It is not easy for them. Sometimes they get the short end of the stick. It is nice for them to come and play against kids their own age and show what they’ve really got.”

The draw for kids toward the U-17 program is obvious.

“It starts with the coaching,” Vassel said. “If you look at the track record of coaches we have had. We’ve had guys who have gone on to coach in the NHL and AHL. They know what it takes to get to the NHL level. Starting with the coaching staff there is a draw there for kids who want to get to the NHL level. Obviously playing with the top twenty players in your age group every day, that is a pretty good draw in itself.”

The performance of the Minnesota kids was a good draw as well. Here are some of the highlights I noticed from the game Saturday afternoon:

Nick Swaney had a nice blocked shot and Jacob Olson was physical and showed a nice stick deflecting a puck that would have resulted in a point blank scoring chance.

Goalie Dyllan Lubbesmeyer made up for a defensive mistake by getting his left pad out and turning away a one on one opportunity that could have been mistaken for a penalty shot. Later in the game, Ryan Edquist was in between the pipes and made a similar big save on a breakaway.

The Minnesota kids broke through late in the first period on the power play. They moved the puck into the corner and Nick Poehling worked it back to the blue line. From there Jack Ahcan fired a slap shot towards the net that Jack Poehling tipped home.

Peter Tufto made a great defensive play to break up a two on one opportunity and later in the period even though it was not allowed, Jack Poehling buried a slap shot from the high slot.

Alcan made a nice one on one defensive play later in the game using his stick to stop what was developing into a two on one.

Nick Poehling showed how physical he could be as he fought through a check on the boards, maintained control of the puck and made a pass in front of the net that nearly resulted in a goal.

Casey Mittlestdt made a great individual play by making a couple of quick moves with the puck, fired the puck on net and then was able to bang in his own rebound for the teams’ second goal.

The final score was 8-2, but according to the scouts I was able to talk to, they not only were enjoying the event, they liked what they saw from the Minnesota kids.