A Heart Of Gold 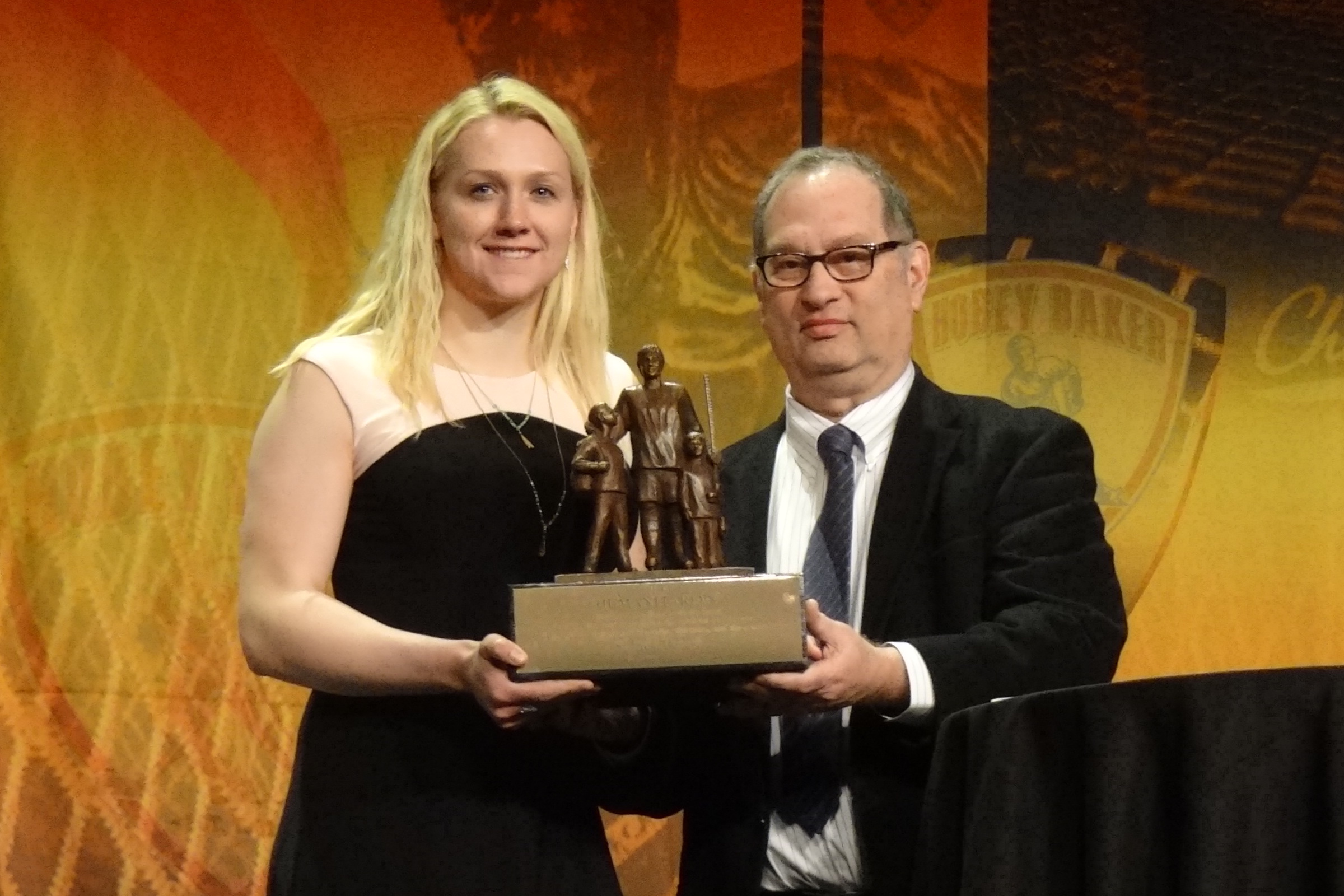 St. Paul — Sidney Peters woke up Friday, April 6 with a notification on her phone for a missed call. It was the phone call she’d hoped for and put so much work in for.

The University of Minnesota goaltender, who just wrapped up her collegiate career less than a month ago in the NCAA quarterfinals, was informed she’d been accepted to the Uniformed Services University in Maryland. There, Peters will continue her education for a career in medicine while serving in the Air Force.

And to top the day off, Peters accepted the Hockey Humanitarian Award Friday evening at Roy Wilkins Auditorium.

“Today has been the coolest day of my life,” said Peters, who came to Minnesota from Geneva, Ill. “I had a missed call from the Dean at the Uniformed Services University so I called him back and he offered me a spot with the Air Force. It’s the coolest accomplishment I’ve been a part of.”

Peters’ numbers may not have been considered the elite of the elite her senior season, but they were certainly above average and provided the Gophers with a backbone on which to build their 24-11-3 season.

She posted a 1.93 goals against average (18th-best in the country) and a .922 save percentage, numbers that give any team a chance to be successful, but it takes a lot more than these statistics to win this award.

How about 830 volunteer hours served in various communities for a qualifying stat? Peters is a certified Emergency Medical Technician with the U of M Emergency Medical Services, working on campus and namely Gophers football games.

“We work with a lot of drunk kids,” said Peters, a kinesiology major with a minor in biology. “I also work a lot in one of the hospitals on campus.”

Peters volunteers with Maroon and Gold Impacting the Community (a development program that sends student-athletes all over the Twin Cities to schools and children’s hospitals). She was also a goaltending coach at Hockey Ministries International in Chicago, but the defining piece of volunteer work she’s completed was an eight-day trip to Haiti to help serve with her favorite charity, Project Medishare in 2016.

“I felt like I came away with a lot of lessons and a new perspective on my career and life in general,” Peters said. “It makes a bad day at the rink not look that bad at all.

“It also made me realize there’s so many people out there that we can help and there’s so much more we can do.”

And with all that on the schedule, one could wonder how she ever found time for hockey.

“It’s difficult, but it’s rewarding. I got used to working with half a battery,” Peters said. “I’ve enjoyed the last five years. I wish I had more time in college, but I know with this next step, I’ll have more opportunities to be excited about.”

Peters has wasted no time moving on to a new chapter in her life, completely different from goaltending, now that her hockey career is complete. She’ll complete officer training school in Alabama this summer before school starts in August in Maryland.

The Humanitarian Award announcement proceeded the unveiling of the men’s AHCA Division I All-Americans.

Gaudette is the first Northeastern player to receive the award and was the only finalist to attend the ceremony. It was the first time in Hobey history that two out of the three finalists had to miss the presentation. Borgstrom (Florida) and Donato (Boston) are playing for NHL teams competing for playoff positions.