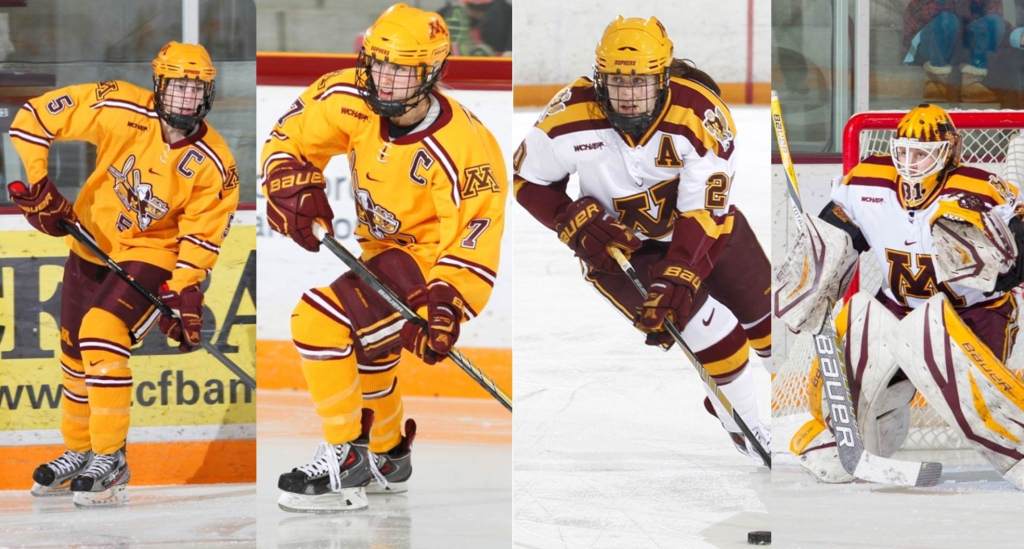 “Sky’s the limit,” Ramsey said. “It was always in a joking manner.”

Lorence agreed, saying that feat was “kind of unrealistic.”

“Once we got here, we realized how special of a program it is, and the special teams that we’ve had,” she said. “It’s been kind of a surprise that we’ve had so much success. But it’s been a lot of fun.”

Four years later, it’s not really a joke. They’re in a position where there’s potential for winning three out of four NCAA titles.

The gals have come close to their in-jest prediction so far, winning two NCAA Championships and finishing as the runner-up once in compiling a 145-10-7 overall record. Ramsey and Lorence, along with senior teammates Rachel Bona and Shyler Sletta, will go down as the most decorated class in Gopher women’s hockey history.

“It’s been a wild ride,” Ramsey said. “Crazy to think this is the end of it all.”

And they’re not quite done yet.

The top-seeded Gophers face Wisconsin at 5 p.m. Friday at Ridder Arena in the semifinals of the Frozen Four. The winner will move on to the national title game Sunday afternoon.

With all the history and success, wrapping their minds around what they’ve done might be harder than one would think.

“I don’t think people really realize what we’re accomplishing as a group,” Bona said, who has 14 goals and 22 assists this season.

Though it’s tough to pinpoint one exact moment from the past four years, Bona knows that “winning at home here two years ago and completing that perfect season” was pretty special.

“It really hasn’t set in yet,” Ramsey said. The co-captain from Chanhassen is a 6’0” defenseman with nine goals, 24 assists and a plus-45 in 39 games this season. She finished last year ranked second in the nation and first in the league in scoring among defensemen.

It hasn’t hit Lorence yet either, she said.

“I’m just trying to enjoy every single moment,” Lorence said. “I’m looking forward to see what we can do this weekend.”

So what’s made this class of Gophers so successful? It’s a combination of a lot of things, according to Ramsey. She pointed to coach Brad Frost striving to bring in character over talent when it comes to his players, plus there’s just a strong bond on the team.

“Just having fun while working hard at the same time has been huge for us,” Lorence said, an assistant captain from Mounds View with 17 goals and 16 assists this year.

Sletta is a backup goalie from Elko New Market who’s played in five games this season, notching a .973 save percentage and one goal allowed. She earned a complete game shutout in a 4-0 win against St. Cloud State in January, making 18 saves. Her teammates called her a great role model and “real backbone” for the other goalies on the team.

Looking ahead to their final game lacing up the skates for the Gophers, the women know it will be emotional for them. Ramsey said she wants to be “full of smiles and not tears.”

“We have a lot to be proud of,” Bona said. “I don’t think these four years could have gone any better than they have.”

And that’s no joke.