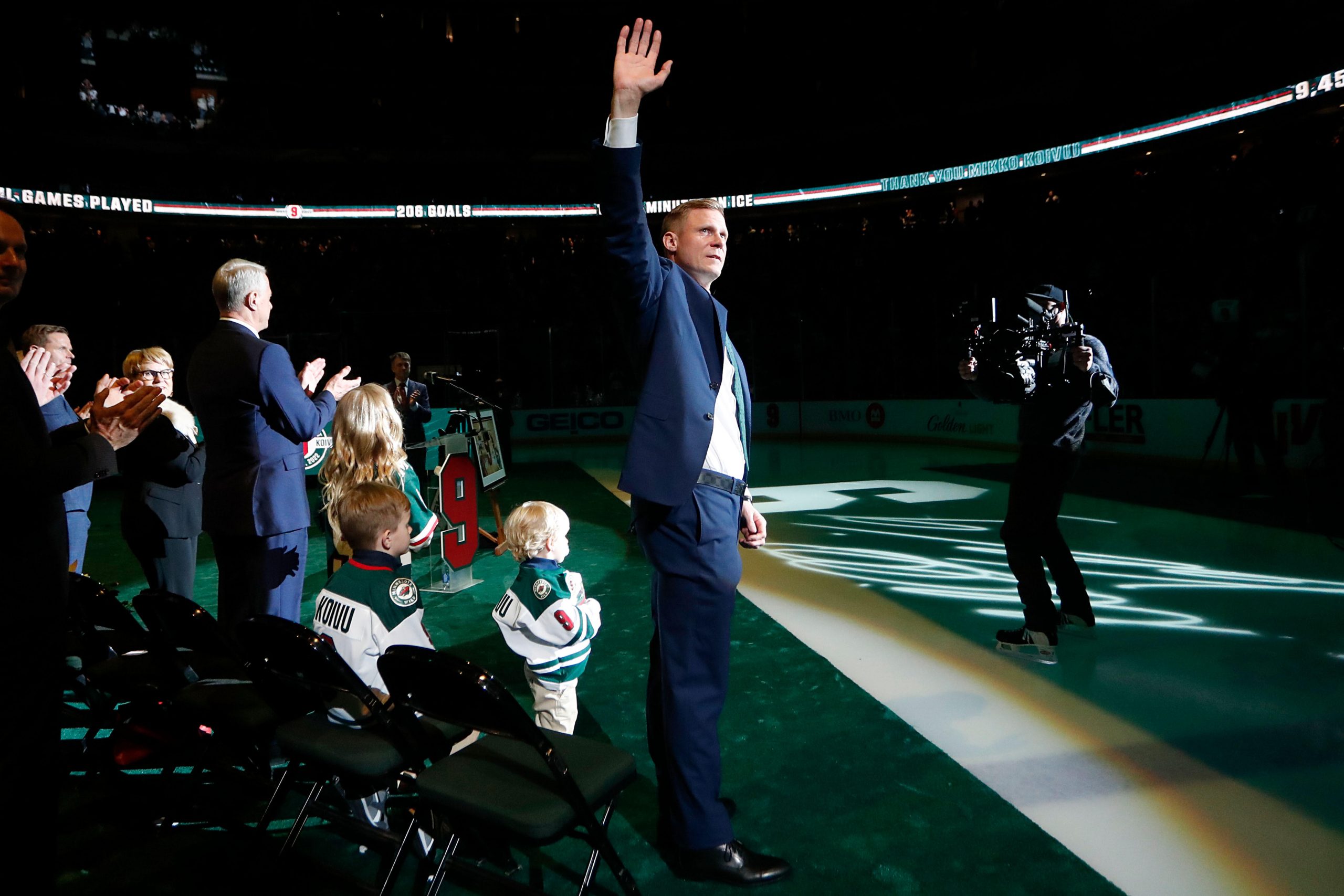 SAINT PAUL — The New York Rangers retired future Hall-of-Fame goaltender Henrik Lundqvist’s No. 30 on Jan. 28, 2022 in an epic pre-game ceremony with former Rangers teammates Mats Zuccarello and Cam Talbot on hand. Zuccarello scored goal and chipped in an assist while Talbot stopped 25 of 27 New York shots in a 4-2 Minnesota win, spoiling a special night in the Big Apple.

Minnesota had the tables turned on them Sunday night when former Wild players Mikael Granlund, Luke Kunin and their Nashville Predators teammates returned to Minnesota to pin a second-straight loss on the Wild, putting a damper on an emotional night in which long-time captain Mikko Koivu’s No. 9 was retired.

Nashville captain Roman Josi scored twice, including a critical power-play goal 1:05 into the third period, and goaltender David Rittich turned away 26 of 28 Minnesota shots to lift the Predators to a 6-2 win before a purely coincidental 19,009 at Xcel Energy Center. Matt Boldy and Jordan Greenway each tallied for the Wild while Minnesota goaltender Kaapo Kahkonen allowed four goals on 23 shots.

“This is as special a night as possible and it kind of sucks,” Minnesota defenseman Matt Dumba said. “But we’ll put it behind us, have a good night with with our old teammates and celebrate Mikky.” 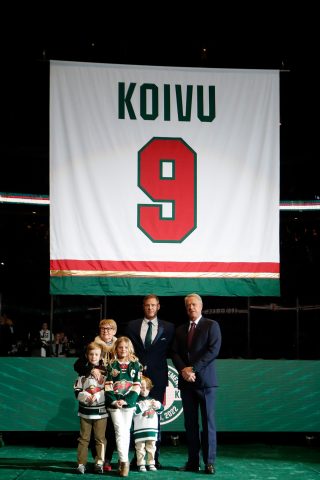 Mikko Koivu poses in front of his number retirement banner with his mother, Tuire, his father, Jukka, and his children Kasper, Sofie and Oskar on Sunday night at Xcel Energy Center. (MN Wild/photo by Bruce Kluckhohn)

In a moving pre-game ceremony hosted by Bally Sports North’s Wild play-by-play voice Anthony LaPanta, Koivu’s parents and children were on hand along with his brother, Saku, and niece, Ilona. Niklas Backstrom and Kyle Brodziak were among several former teammates in the building but they represented the group on the ice while Wild owner Craig Leipold and GM Bill Guerin rounded out the dignitaries.

Wild fans watched via the scoreboard video screen as the guest of honor emerged through the wooden doors of the team dressing room, walk the short hallway to the bench and onto the ice as he had done so many times before in uniform. The roar of the crowd crescendoed with each stride until it peaked as he appeared in the arena, acknowledging the fans’ love with waves as he made his way to his seat.

In a touching speech, interrupted several times by cheers and random shouts of “we love you” from from fans, Koivu could hardly have left anyone out as he thanked his family, teammates, coaches, GMs, support personnel, Leipold and, most of all, the fans of ‘The State of Hockey.’

“Having my jersey number retired by the Minnesota Wild is a greater honor than I know how to say … in English or in Finnish,” Koivu said in his speech. 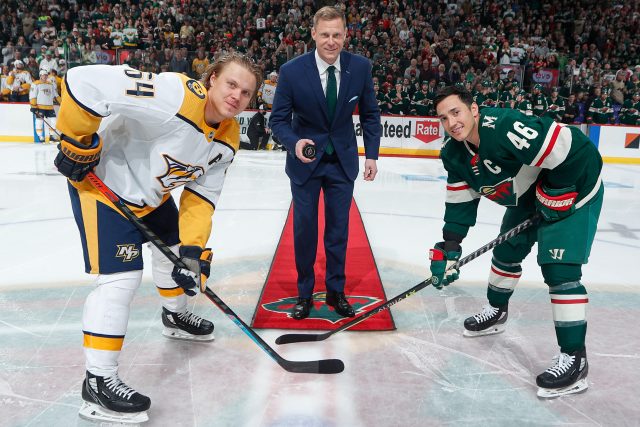 Selected in the first round (No. 6 overall) in the 2001 NHL Draft, Koivu scored his first NHL goal Nov. 6, 2005 against Jean-Sebastian Giguere and the Anaheim Ducks. Koivu was named the team’s first full-time team captain on Oct. 20, 2009 and followed that up a day later with a goal, an assist and the shootout winner to beat the Colorado Avalanche. 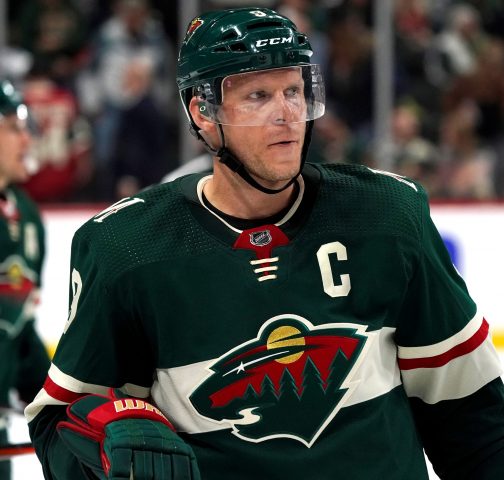 Mikko Koivu surveys the landscape during a break in an Oct. 6, 2018 game against the Vegas Golden Knights at Xcel Energy Center. (MHM Photo / Rick Olson)

Koivu finished his career with a brief seven-game stint as a Columbus Bluejacket to begin the 2020-21 season where he registered his final goal and assist.

The Wild got off to an adrenaline-fueled start, notching the game’s first five shots, but Filip Forsberg netted Nashvilles’s first shot of the game at the 8:24 mark of the first period for a 1-0 Predators lead. Less than five minutes later, however, Wild rookie Matt Boldy pounced on a loose puck along the goal line to Rittich’s left and buried his 12th of the season from a sharp angle with assists from Freddy Gaudreau and Kevin Fiala. 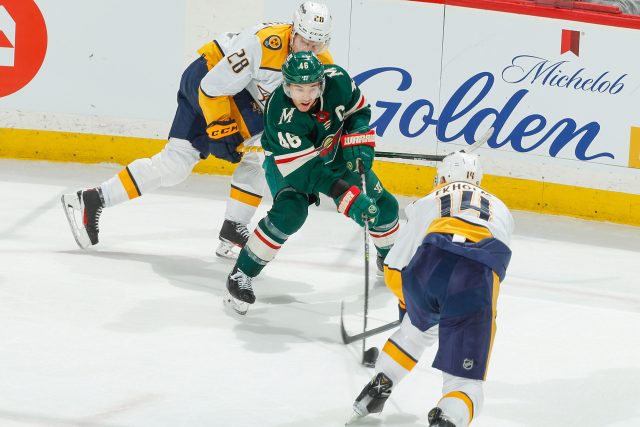 The 1-1 score held up until near the midpoint of the second period when Josi skated straight up the slot, completely unimpeded, and slipped a backhand shot between Kahkonen’s glove and the top of his left pad at 8:44. But Minnesota answered back at 11:10 with Jordan Greenway’s fifth goal of the year on a power move to the net from the left circle, beating Rittich inside the far post.

Unfortunately for the the evening’s festivities, it took just 50 seconds for Nashville’s fourth line to answer when Philip Tomasino jumped on a juicy Kahkonen rebound to score into a wide-open net for his ninth of the season.

Evason twice pulled Kahkonen for an extra attacker but that only resulted in an empty-net goals by Forsberg at 17:42 and Nick Cousins at 19:31.

Greenway said, win or lose, the ceremony was a great recognition of what Koivu meant to the franchise.

“Obviously, we would have liked to get the win for him, it would have made the night that much better,” Greenway said. “But when it comes down to it, that’s a once in a lifetime thing you’re able to be a part of and it’s inspirational … Even with a loss, it’s incredible and something that will definitely be celebrated.”