St. Paul United puts experience to use in advancing to Class 1A final 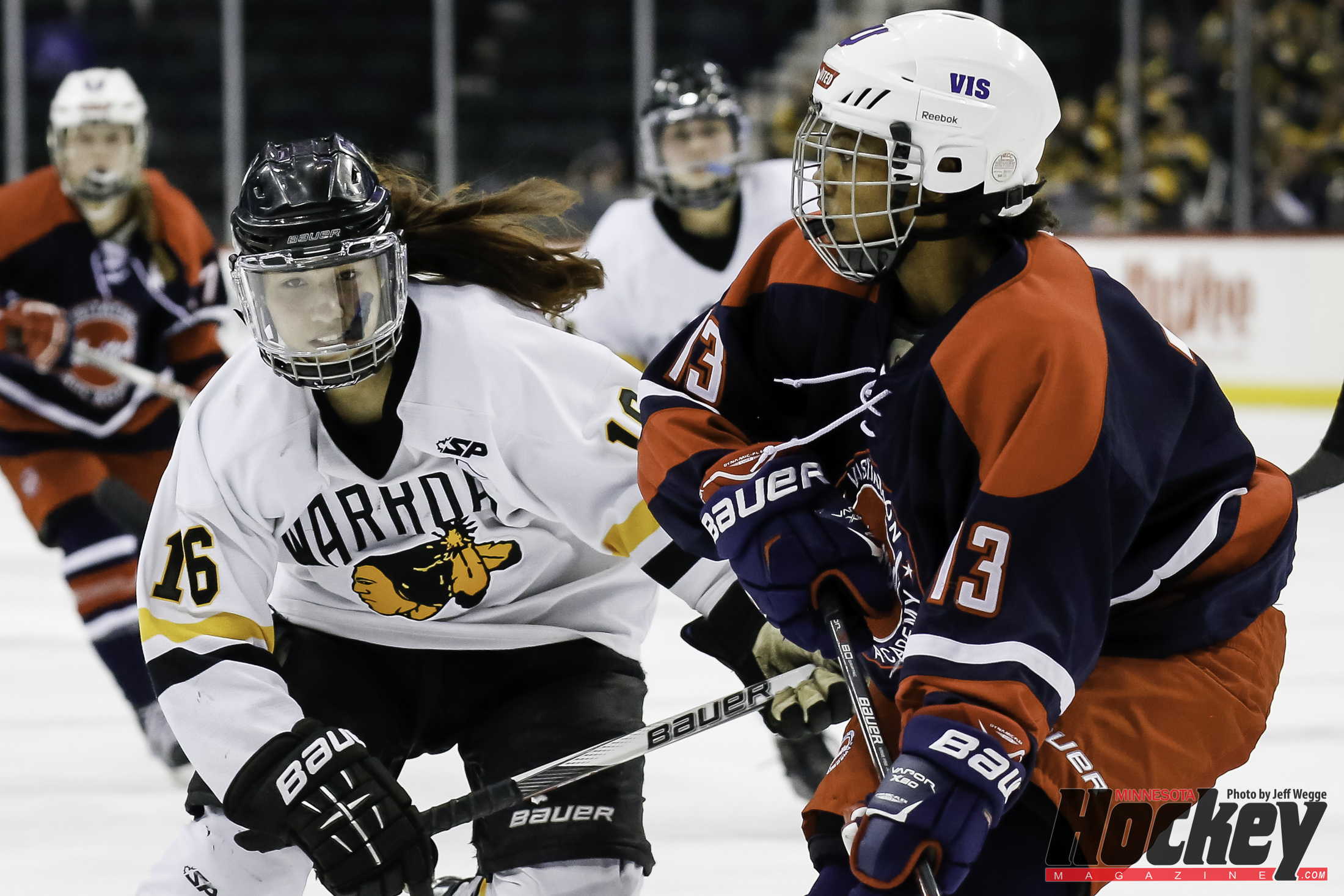 St. Paul United puts experience to use in advancing to Class 1A final

St. Paul — In the 2014 state semifinals, St. Paul United players couldn’t refrain from retaliating late when the game became chippy, and it cost them the game.

United learned from it, and are headed to the 2016 state championship because of their ability to keep their heads.

The Warriors (24-4-1) couldn’t stay out of the penalty box, committing nine penalties against St. Paul, and United capitalized.

When the Warriors’ best players weren’t in the box, the production was there, however.

Although Warroad didn’t have as many shots in the early stages of the game, the Warriors made the most of their opportunities. After United forward Catherine Kerin went to the penalty box for tripping, Warroad defenseman Kaitlyn Kotlowski scored on the Warriors’ first shot of the game.

The Warriors weren’t finished just yet. 42 seconds later, Mariah Gardner notched another goal, putting Warroad up 2-0 on two shots not even five minutes into the game.

“We had a great start compared to any other time of the year, and it gave us that extra push to keep going harder,” Demi Gardner said.

For Catherine Johnson, a senior goaltender of the year finalist, this was one of her worst starts to a game.

St. Paul coach Nate Mauer, wasn’t about to lose confidence in her, however, even with Johnson giving up two goals on Warroad’s first two shots.

‘If she was a junior or sophomore, I probably would have called a timeout after 2-0,” Mauer said. “Instead, I wanted her to get through it herself so she could figure things out. She knew what she needed to do.”

Although stunned, St. Paul settled and responded. With two Warroad players in the box, Sena Hanson scored off the face off three seconds into the 5-on-3 period of play. United nearly doubled the Warriors’ shot total in the first period, but it failed to tie the game in the first period.

United still trailed by one, but the goal played a big part in cutting off the Warriors’ momentum.

“It was definitely a game-changer,” Hanson said. “The whole team, I could tell, was picked up by that goal. The whole team’s moral was just lifted.”

Success bred success as Samantha Burke jammed the puck past Warroad goaltender Emma Brunelle just over a minute into the second period, tying the game at two.

The game didn’t stayed tied for long, though. A wrap-around goal from Demi Gardner gave the Warriors the lead back, halting St. Paul’s second period momentum.

Demi Gardner gave the Warriors the lead, but she also gave that lead away.

As the clock ticked down in the final minutes of the second period, Gardner shoved a United skater to the ice after the whistle, sending Gardner to the penalty box for roughing. St. Paul’s Lauren Boettcher scored shortly after on the power play, tying the game with 2:55 left in the second.

St. Paul forward Joie Phelps scored the go-ahead goal with 7:39 left in the game as Mariah Gardner watched from the penalty box.

“There isn’t a better player (than Joie Phelps) with a 3-3 tie and a puck in front of the net,” Mauer said. “That is her thing. We needed a hockey play, she made it, and we are going to the state championship.”