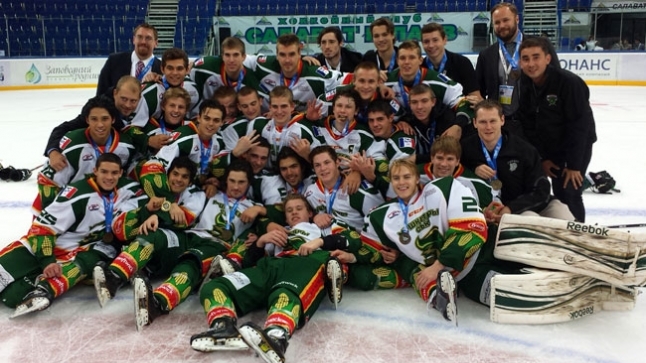 Hibbing’s Adam Johnson’s goal sparked a Sioux City rally from an early two-goal deficit which culminated in Sam Kurker’s goal less than three minutes into overtime as the Musketeers defeated Shinnik of Belarus 4-3.

Former Ohio State and U.S. National Team Development Program goaltender Collin Olson of Apple Valley made 27 saves in the bronze medal game to earn his fourth victory of the tournament.

Johnson’s goal near the seven minute mark of the opening period was his tournament-leading sixth in five JCWC games to earn the Minnesota-Duluth commit the tournament’s Top Scorer award. Additionally, fellow UMD recruit, and Sioux City captain, Neal Pionk of Hermantown was recognized as the JCWC’s Best Defenseman.

The Musketeers are the third team to represent the USHL and the United States in the International Ice Hockey Federation (IIHF) sanctioned tournament jointly organized by the Russian Ice Hockey Federation, the Russian Junior League (MHL), and the Russian Ministry of Sport. The medal is the third consecutive for a USHL team at the JCWC with the Dubuque Fighting Saints also earning bronze last year and the Waterloo Black Hawks capturing silver in 2012.

The JCWC features top junior hockey teams from around the world with nine different countries represented in the 2014 tournament.  Sioux City competed in “Group B” against teams from Austria, Latvia, Sweden, and Russia while “Group A” consisted of teams from Belarus, Canada, Czech Republic, Finland, and Russia.

Ufa was also the host city for the 2013 IIHF World U20 Championship, an event in which the United States, led by coach Phil Housley (South St. Paul), captured a gold medal.