A Swiss Mystery No More 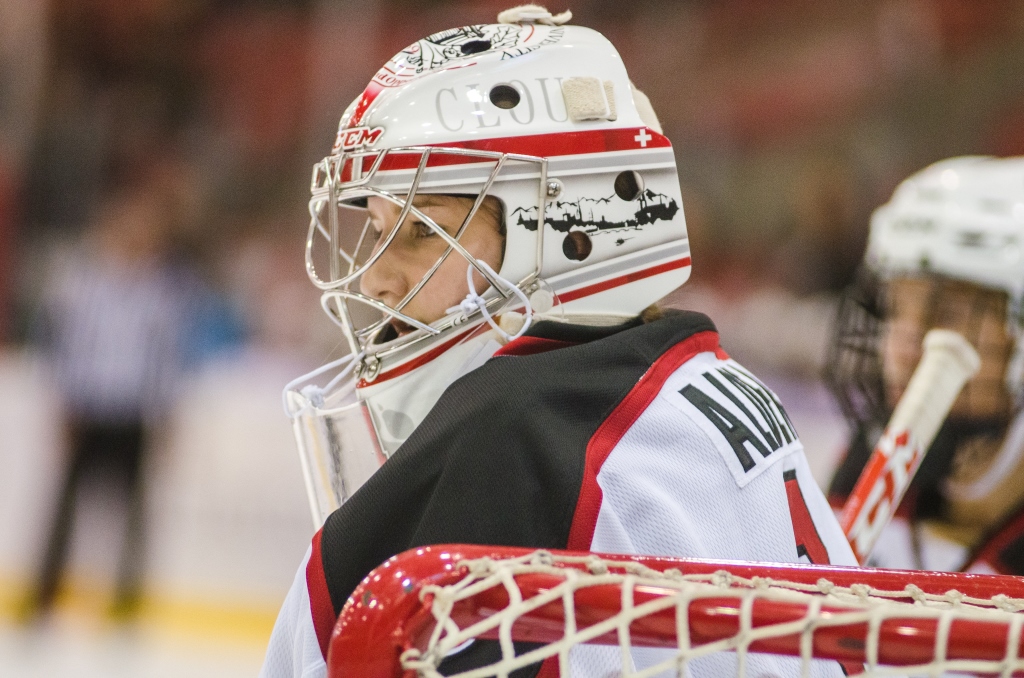 In leading the St. Cloud State women’s hockey team to its highest win total in six seasons last year, goaltending was the least of coach Eric Rud’s concerns. With senior Katie Fitzgerald gobbling up nearly all of the available crease time, all Rud had to do in his second year behind the SCSU bench was send her out there and watch her backstop 12 of the Huskies’ 13 wins.

But with Fitzgerald’s departure and subsequent signing of a pro contract with the NWHL’s New York Riveters, Rud spent the summer thinking a lot about his goaltending and how he was going to fill over 2000 minutes between the pipes.

“You don’t know what to expect when you have three goalies that, basically, you know, one that’s never played hockey in the United States at all and the other two hadn’t played any meaningful minutes in two years,” Rud said.

The three goalies on Rud’s 2016-17 roster entered the season having combined to play the equivalent of just over eight full collegiate games since 2012, with only sophomore Taylor Crosby’s 75 minutes coming in a Huskies sweater. Senior transfer student, and Edina native, Madeline Dahl’s experience came in two seasons with Union College prior to sitting out last season.

All the 21-year-old Zürich, Switzerland native has done is rack up two WCHA Rookie of the Week honors in a three week span in her first month as a Husky. She stopped 51 of 52 shots in an Oct. 7-8 split with North Dakota and followed that up two weeks later saving 56 of 58 shots in a sweep of Minnesota State.

Those performances, combined with a pair of solid early-season Taylor Crosby starts, have Rud breathing a little easier heading into the season’s second month.

“I think four years of this kind of hockey prepared me the best for being here and being ready.” – Janine Alder

“So all summer … you’re excited to see who’s gonna take the ball and run with it,” Rud said. “And, so far, before Taylor got hurt she played a couple real nice games and Janine’s been very good back there.”

Alder had never played hockey in the United States, much less NCAA Division I women’s hockey. In fact, other than international play, including winning an Olympic bronze medal in Sochi, Russia as a member of the Swiss team in 2014, her resume included very little women’s hockey, relatively speaking.

Alder honed her skills playing against men in suiting up for EHC Winterthur of the Swiss National Junior Elite B league, the second highest junior hockey league for men in Switzerland. That experience left her feeling well prepared for the rigors of WCHA women’s hockey.

“It was very competitive and I really loved playing there because it’s such a fast game and hard shots and everything,” Alder said. “I think four years of this kind of hockey prepared me the best for being here and being ready.”

Huskies assistant coach Steve MacDonald got his first look at Alder in the Czech Republic at the 2012 IIHF World Women’s U18 Championship when he was an assistant to Shannon Miller at Minnesota-Duluth. MacDonald monitored her progress from afar and the pair kept in touch over the years primarily via Skype.

When he arrived in St. Cloud MacDonald recommended her to Rud whose only exposure to Alder prior to her setting foot on campus was on video. 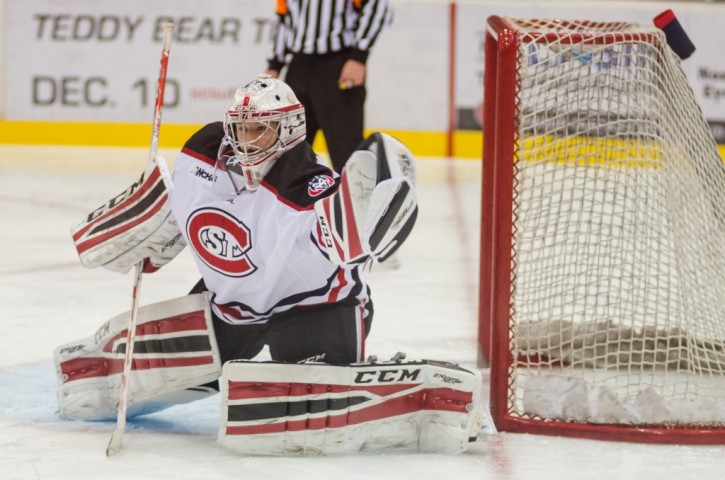 “There wasn’t a lot of video on her against a lot of girls competition so the video we got was of a men’s league hockey in Switzerland,” Rud said. “The one thing we could see on the tape was her footwork. Her skating was excellent and it certainly gives her a chance to be square to the puck all the time even at her size.”

According to Alder, by the time the offer came she required little convincing.

“[MacDonald] just asked me if I want to join and I was like, ‘Yeah, St. Cloud would be the perfect team.’”

“As a goalie, you don’t want to be on a team where you don’t get any shots,” Alder added. “Of course, everyone wants to win championships but I want to play hockey, that’s my biggest love, and I put my heart on the ice every time.”

Some might suggest making the transition from men’s hockey to women’s hockey should make the move easier for someone like Alder but both she and her coach say otherwise.

“In reality, sometimes it’s tough, that transition year, whether it’s the girls doing it from bantam hockey to high school hockey or this level,” Rud said. “The plays develop a little slower, it’s not coming quite as fast, so I think there is a development curve but she seemed to get through it pretty quick and has looked very good in there.”

“The biggest adjustment was from men’s hockey adjusting to women’s hockey because it’s so different,” Alder said after stopping 33 of 38 shots in her first start against defending NCAA champion Minnesota, a 5-2 loss on Oct. 27. “Today it was very close to men’s hockey so it was kind of like my game, my style of game, and I really enjoyed playing it.”

Off the ice, although she speaks five languages, Alder said it hasn’t always been easy dealing with a bit of a language barrier.

“I speak German and adjusting with the language was really tiring in the beginning,” Alder said. “Just like translating everything and getting along with school. But I think I’m settled right now.”

With tournament Most Valuable player and Best Goaltender, Florence Schelling, ahead of her on the depth chart Alder did not play for Switzerland at the 2014 Sochi Games. But you wouldn’t know it by the way she lights up when talking about living her biggest dream as an athlete.

“I wasn’t playing but my experience there was just huge,” Alder said. “Meeting all these big players and big sports people was amazing. Hopefully, I’ll experience it once more.”

One person she met in Sochi who stood out from the others in Alder’s wide eyes was someone she met in line at the Olympic Village cafeteria, of all places, as they were each going through the buffet line.

“I met Henrik Lundqvist, the Swedish goalie, and I think he was one of the nicest guys there and just so friendly and just so down to earth,” Alder said of the long-time New York Rangers goaltender. “He spoke to me like if he was like a normal person.”

One weekend Alder has circled on her calendar is Dec 2-3, when Olympic teammate, Lara Stalder, and her Minnesota Duluth Bulldogs travel to St. Cloud for a set of games. Both players expressed excitement the potential first meeting between the WCHA’s lone Swiss players.

“I’m very looking forward to facing her because she had some very good games recently and she will be on the top of her career I think,” Alder said. “She will be going to the NWHL next year so she’s one of the top players. I’m really close to her so I’ll be looking forward to this, it will be fun.”

“It’s exciting because because everyone kind of like knows players on other teams from high school and now I finally know someone from Switzerland to play against,” said Stalder, a standout senior forward for the Bulldogs and Lucerne, Switzerland native.

“I can’t wait to play against her and maybe put some goals behind her,” added Stalder with a chuckle.

Historically, St. Cloud State has struggled to put pucks in the net. While that could eventually change under Rud’s leadership, keeping them out of their own goal will, in the meantime, remain that much more critical to any success the Huskies have. Goaltending, of course, will continue to play a huge role in that and Alder looks forward to the challenge.

“St. Cloud is just in the middle and I think if we keep on working hard, we can push St. Cloud to the top teams and that’s what I’m looking for,” Alder said. “Hopefully I can be a big part of this development in St. Cloud to get the team closer to the top.”