A tale of two programs

These are contrasting times for St. Cloud State and Minnesota 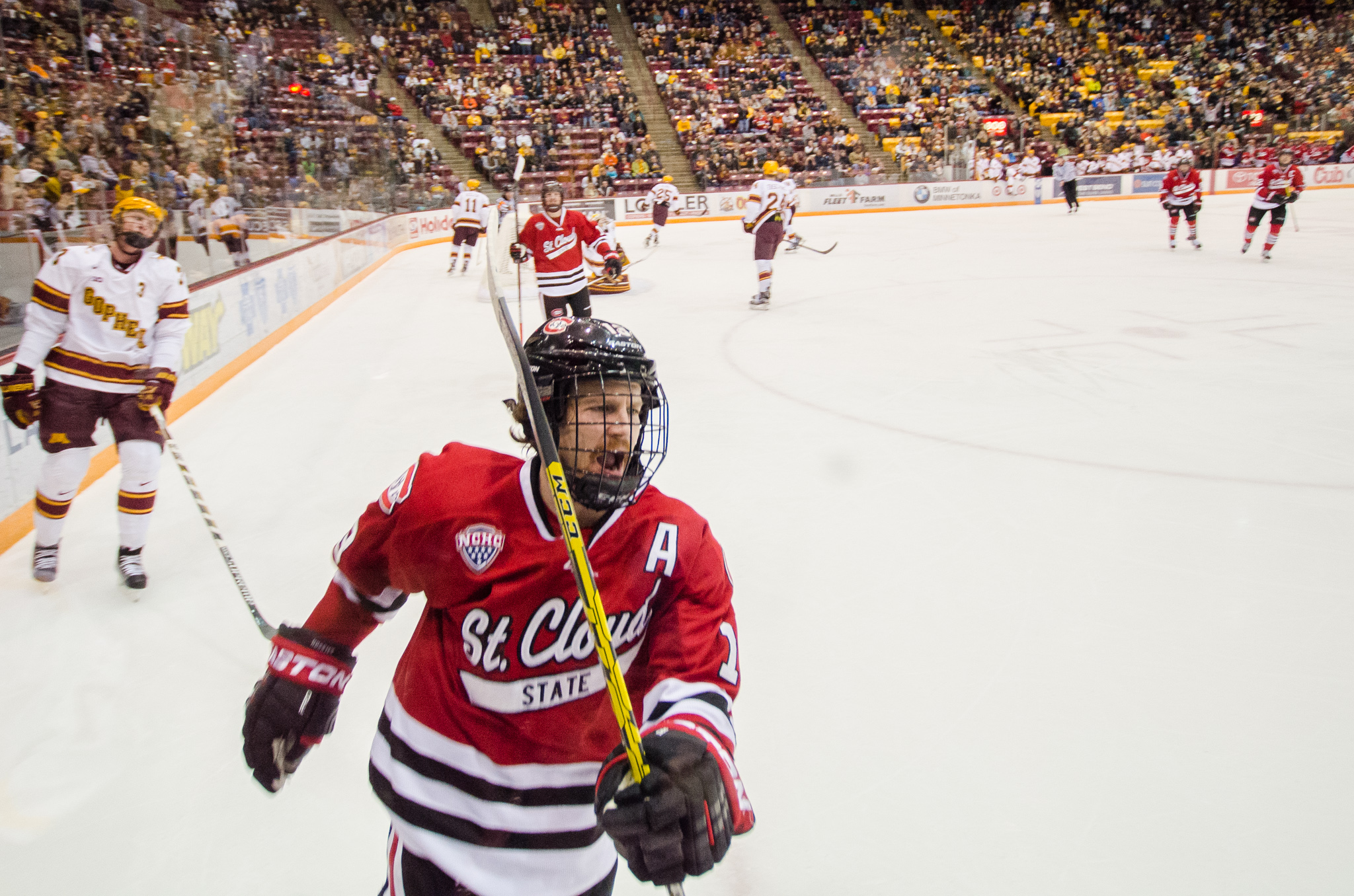 These are contrasting times for St. Cloud State and Minnesota

Minneapolis – St. Cloud and Minneapolis are, and always will be, separated by 65 miles of interstate highway running northwest through central Minnesota farm country. The two cities’ Division I hockey programs, however, are traveling different directions this season and the distance is widening as the calendar flips to December.

This past weekend’s Friday-Sunday series between St. Cloud State and Minnesota provided irrefutable evidence of that following the Huskies’ first-ever regular season series sweep of the Gophers at Mariucci Arena.

With 3-2 and 7-4 victories in Minneapolis, No. 7 St. Cloud State (11-3-0, 5-1-0 NCHC) has won seven of its past eight games dating back to a pair of October road losses to Quinnipiac, which currently sits atop the Division I PairWise Rankings. The sweep boosted the Huskies up to No. 4 on that list as they head home to resume conference play on Friday against No. 6 Nebraska Omaha, ranked fifth in the PairWise.

Meanwhile, unranked Minnesota (4-7-0, 0-0-0 Big Ten) has dropped three in a row and four of its past six games dating back to an Oct. 23-24 home sweep of an overmatched Northeastern team. The Gophers open Big Ten conference play this weekend hosting Ohio State (3-9-0) on Friday and Saturday.

St. Cloud State coach Bob Motzko was, understandably, happy with his team’s performance in pulling off such a rare feat.

“This team doesn’t get swept here, hardly ever,” Motzko said. “So we have to enjoy that because they are a good hockey team.”

The last team to pull off back-to-back wins at Mariucci the same weekend was Alaska-Anchorage in that now infamous WCHA first round playoff series in March of 2011. While that weekend had much to do with what the Gophers failed to accomplish, this one was a product of the Huskies simply being better right now.

“We’ve been there before, we kind of know what it takes and if we wanted to get this thing taken care of on the road it was going to start with us.”

Motzko’s more experienced and deeper team, particularly his seniors, proved to be too much for Minnesota, both in comeback fashion on Friday and playing with a lead on Sunday. Through 14 games, Motzko’s senior class has produced 25 goals among its 71 points.

“Our seniors were large this weekend,” Motzko said. “They were a big part of our offense, especially on the special teams.” 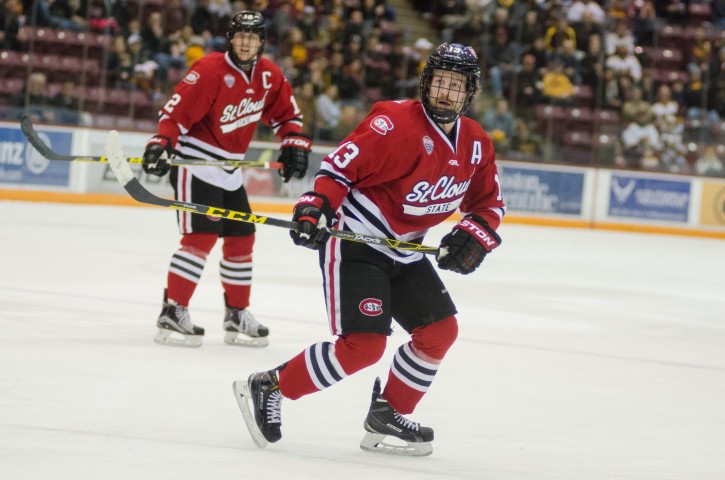 SCSU’s five seniors (Jimmy Murray, Kalle Kossila, Joey Benik, David Morley and Prow) combined for 17 points (5-12–17) in the series including two goals and eight assists on a Huskies power play which converted at a sixty-percent clip (6-for-10) over the two games, including 4-for-7 on Sunday.

“When you get those opportunities, if you can take advantage of it, you can change the game,” Motzko said on Sunday. “And that’s what it was tonight. You can write it 10 different ways, it was a special teams game.”

St. Cloud State now ranks third in the nation on the power play at 29.8 percent (17-for-51) and third in team offense at 4.29 goals per game. The Huskies, behind the strong goaltending of junior Charlie Lindgren, are also a top ten team defensively, allowing just 1.86 goals per game.

Minnesota coach Don Lucia, was neither pleased with his team’s lack of discipline nor its penalty kill which saw is success rate fall two full percentage points from 90.6 to 78.6 percent in two games. He could not, however, fault a Gophers’ offense which has only produced 2.55 goals per game this season.

“Scoring wasn’t a problem tonight, we had four,” Lucia said Sunday night. “That was enough to win a game.”

But it wasn’t enough with a lineup featuring no seniors and seven freshmen, including goaltender Eric Schierhorn who, after allowing five goals on 20 shots on Sunday, was replaced by sophomore Nick Lehr to begin the third period.

Lucia, who has been holding steady at 399 wins behind the Minnesota bench for three straight games, said there’s a fine line between where the Gophers are and where they want to be and he does not believe they are as far away as they may seem.

“It’s great that we scored four but we need some guys, especially our juniors, they need to score,” Lucia said. “With so many young guys, we need some of those guys to score.”

While Minnesota’s freshmen (2-4–6 points) outscored St. Cloud State’s rookies (4 assists) in the series, the impact of SCSU’s freshmen (9-29–38) through two months of the season has dwarfed that of the Gophers (6-9–15). Even so, Motzko admitted he’s been holding them back to a degree.

“Our freshmen would be further along if we could play them on the power play,” Motzko said. “They’re power-play players and we’ve kind of got older guys so they’re not getting many looks on the power play and that’s such a developmental time for young guys so we kind of have to do it through practice and gain the confidence because they’ve been a big part of what we’re doing.”

Prow, whose defensive partner is freshman Jimmy Schuldt, said the contribution from the rookies has been huge.

“Anytime that the young guys can step up into key roles and really help us out it plays a big part,” Prow said. “It goes through our whole lineup, it’s very deep and I think everybody’s starting to get their role and they know what to do.”

On the bright side for Minnesota, which outshot the Huskies 33-26 on Sunday, the Gophers scored on both power plays as in the series finale as Minnesota went 3-for-4 with the man advantage on the weekend. In addition, sophomore forward Leon Bristedt factored into five of his team’s six goals in the series to boost his team-leading points total to 12 (5-7–12).

“We play hockey because we love to be together and we love to win and, when you don’t win, it’s tough,” Bristedt said. “We’ve got to try to stay positive and we know we play good sometimes and we’re just going to have to elevate our game a little bit and take it to the next level.”

Minnesota junior defenseman Jake Bischoff who scored his first two goals of the season in the series said, despite the struggles, he believes his team is, “in a good spot.”

“I think over the course of the season we’ve taken some strides and grown a lot,” Bischoff said. “We still have plenty of room to grow but I think we’re getting there.”

St. Cloud State, too, has room to grow and will have that opportunity against UNO and another road test at No. 9 Denver the following weekend.

“It feels great today, now we jump back in a monster league series,” Motzko said. “We have to park it quickly and enjoy it for the night and we’ll take tomorrow off and then get back to work.”