The Warroad Warriors are heading back to the Class A title game. 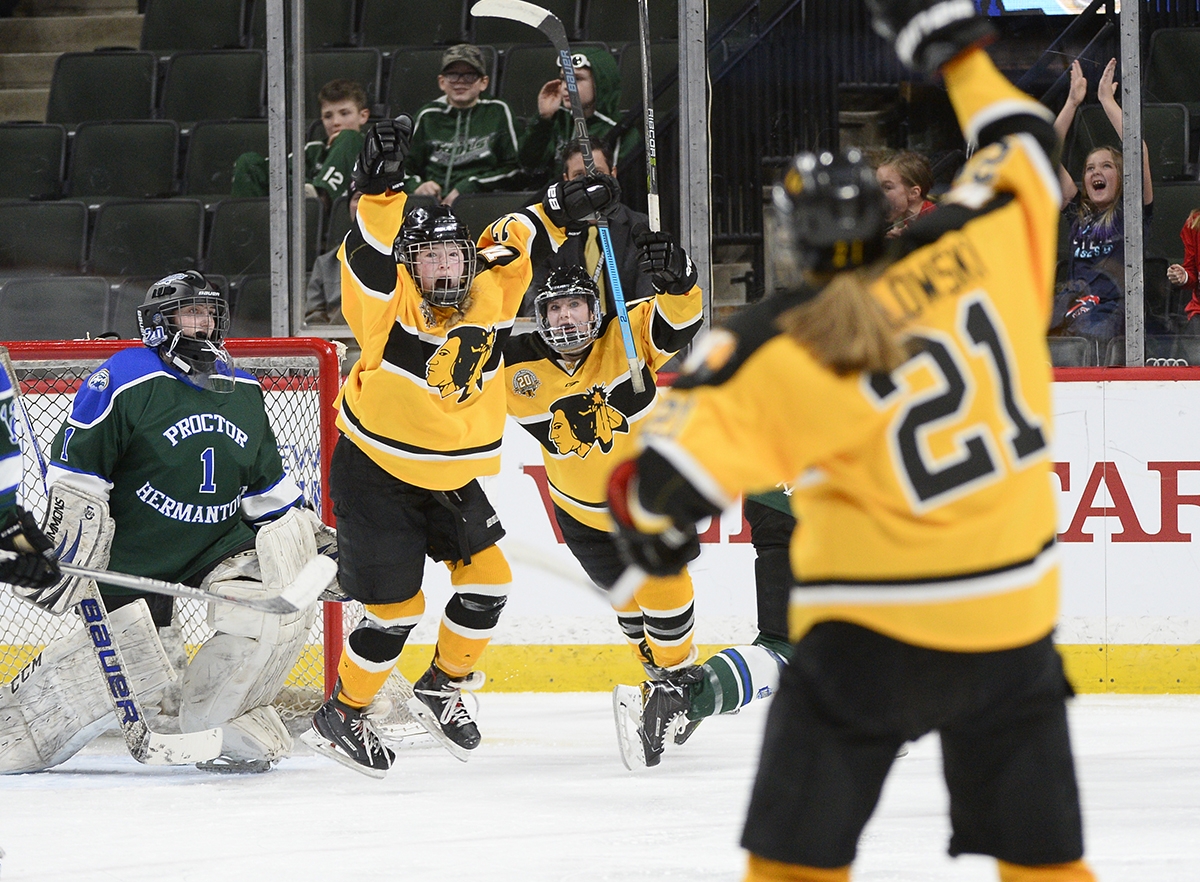 It wasn’t looking very promising for the No. 1 seed Warroad Warriors on Friday.

The Proctor/Hermantown Mirage certainly gave the No. 1 seed Warroad Warriors a run for their money. Although the Mirage trailed after the first period, they rallied for two goals and dominated play in the second.

They had the best team – and probably the best goaltender – on the ropes heading into the final period of play.

“It couldn’t have gotten much worse,” said Warriors head coach Mike Marvin. “We were terrible and they were really good.”

Proctor/Hermantown took things over in the second period with a pair of goals Dehli Heikes and Alyssa Watkins and led 2-1 heading into the intermission.

Typically, Kuntz is a tough netminder to beat. Of the 29 games she played this season, there was only three instances in which she allowed more than one goal.

“We talked about there’s 51 minutes in a hockey game,” said Mirage head coach Glen Gilderman. “If we get all 22 of you who are involved to go hard for that amount of time, will be in good shape.”

However the Warriors turned it on for four unanswered goals from Hannah Corneliusen, Kaitlyn Kotlowski and Genevieve Hendrickson, rallying their team to a 5-2 victory

Marvin didn’t believe doubt was creeping in but knew something had to change.

“I don’t know if there’s doubt, it’s reality,” said Marvin. “We better get going or we’re going to be in trouble. We knew we could do it, but it was a matter of it was in the cards today and it was thankfully.”

Warroad’s win sets up a rematch of last year’s Class A final with the Breck Mustangs. Something that Corneliusen say’s the team is ready for.

“It’s a really good opportunity for us,” said Corneliusen. “Because we’ve been working towards it all year. Looking at that game taught us a lesson that we have to go right away and we can’t wait until the third period and we’re looking forward to the next game against Breck.”

Warroad and Breck will drop the puck at 4 P.M. on Saturday in St. Paul.