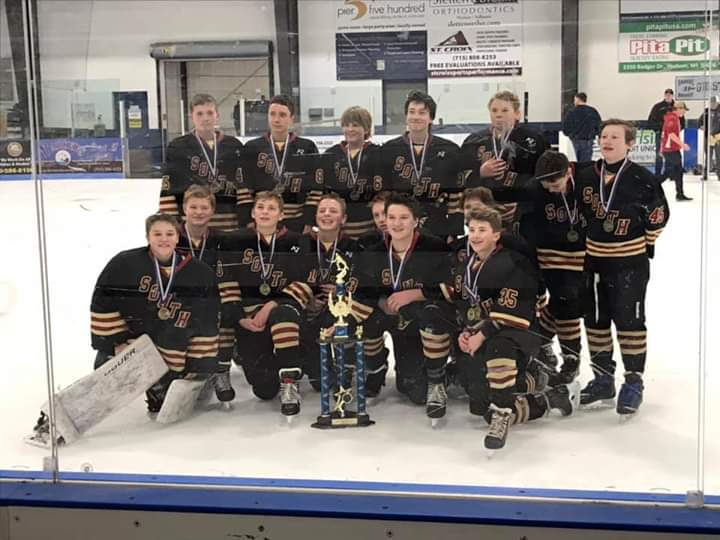 Taking on five players that were cut from Eastview’s program, the Lakeville South Bantams have overcome adversity since day one.

This group of young men were put into a very tough situation and have proven hard work, heart and hustle pay off. Earning the title of Champions in Hudson Wisconsin this weekend. The boys lit the lamp 18 times over the three-game tourney and the stingy goalie, Colin Yackel, only allowed two goals in three games.

“Getting the kids to gel into a team and firing on all cylinders has been just great to be a part of,” says Head Coach Scott Wasilowski. The team is made up of former district 8 rivals Eastview and Lakeville South boys.

In the 14 games they have played, the team has scored 123 goals for and only allowed 19!! The powerhouse offense is led by Cullen Ryan, Luke Meyer and Mason Sender. The stingey hard-checking team is spearheaded by the physical play of first year bantams Wyatt Ronn and Luke Wasilowski who average six hits per game, each! The stellar goaltending is a one-man show starring Colin Yackel. Yes, from the legendary hockey family and cousin to Wild goalie Alex Stalock.

The sky’s the limit for this group of boys. The strong work ethic and the ability to overcome some tough challenges of merging the kids from two rival programs into one cohesive unit has been awesome to watch.