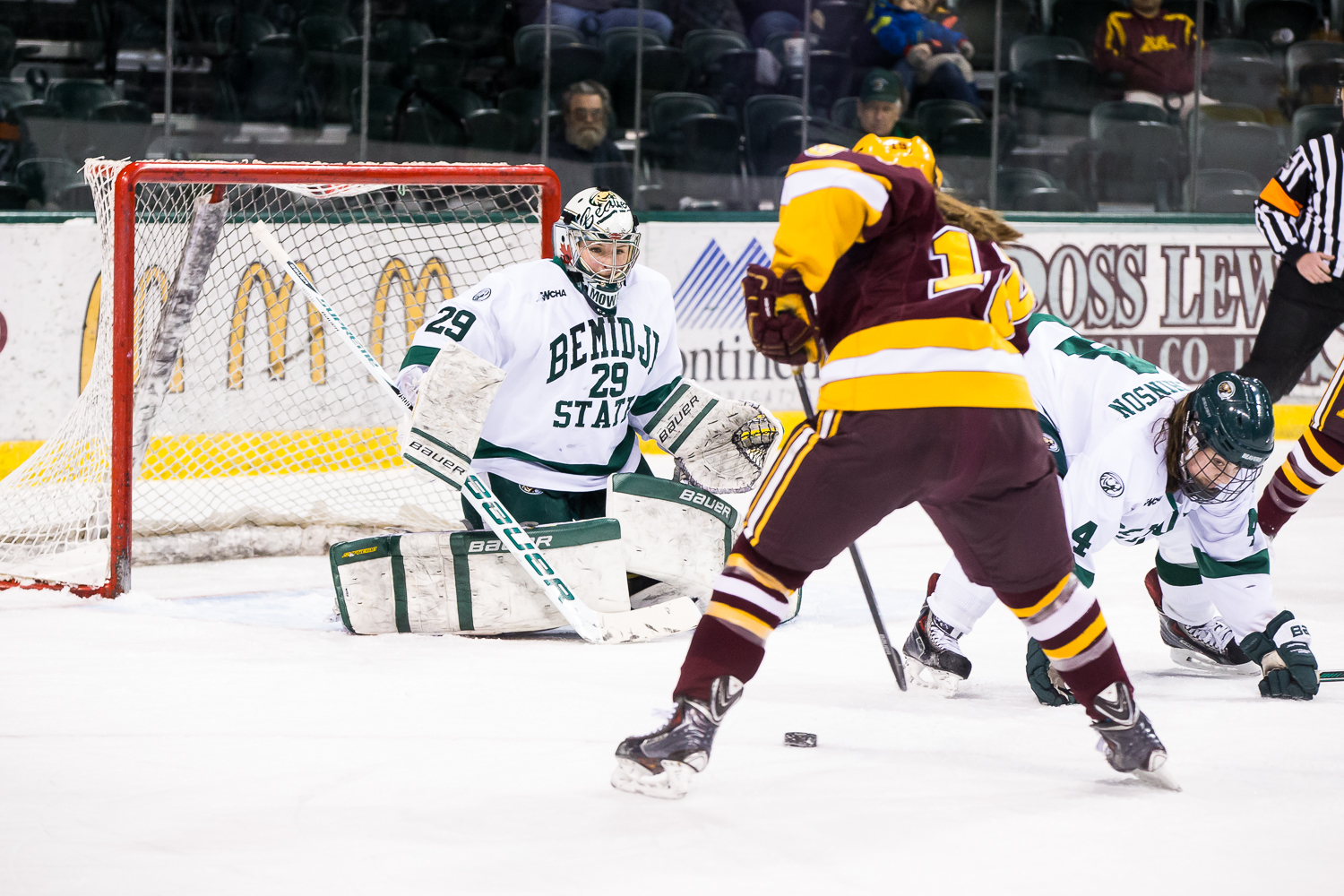 Bemidji State junior goaltender Brittni Mowat squares up in preparation for a shot in a Feb. 21, 2015 game against Minnesota at the Sanford Center in Bemidji. (MHM Photo / Brent Cizek)

The stories about superstitious goalies are legendary. Goaltenders’ antics are often weird.

Long ago, Glenn Hall, a Hall of Fame goalie, would vomit before games. He believed he would lose if he didn’t. Another NHL goaltending great, Patrick Roy, would carefully lay out each piece of equipment and dress himself in a specific order, talk to his posts and never skate over the blue lines or red lines — but, rather, just step over them. Some goalies wear the same undergarments for good luck. Lots of goalies bang the two ends of their stick against the goalposts to begin and end every period.

Goaltenders? Bring up the word and often times hockey people roll their eyes. The stereotype says they are weird.

And then there is Brittni Mowat. As far as a goalie goes, the junior from Bemidji State is as predictable as Thanksgiving on Thursday. No crazy pre-game rituals. She doesn’t need them and Bemidji State fans wouldn’t have any other way.

She is consistent. And she is good. So good, in fact, that she became the first, first team All-American goaltender ever from Bemidji State last season. Mowat is even better statistically this season for the Beavers, who are ranked fourth nationally, a high-water mark in school history.

Mowat has posted a 10-2-1 record with two shutouts, a 1.06 goals-against average and a .961 save percentage for Bemidji State, which faces defending national champion Minnesota this weekend in a matchup of top-five teams in Minneapolis.

“She is a wonderful person and a great teammate. A hard worker,” said Jim Scanlan, Mowat’s coach and a former goaltender himself. “Brit is a great student; very conscientious. There is nothing quirky about her that I can tell you.”

“I think I do things pretty normally,” said Mowat. “I am calm before the game. I just try to focus on the game ahead because every game is important. But I have no superstitions.”

Since there is nothing abnormal about her pre-game preparations, there is no reason to change for Mowat.

As a sophomore last season, Mowat recorded a 19-13-1 record with a 1.68 goals-against average and a .945 save percentage. Her 19 wins marked the best single-season win total in program history and she posted a single-season record for most shutouts with seven in BSU’s best campaign in school annals.

Behind the play of the All-American goalie and a shot-blocking, crazed defense, Bemidji State upset Minnesota in the semifinals of the WCHA Final Face-Off before losing to Wisconsin in the championship game.

“Brittni’s best asset is her mindset. She doesn’t let anything bother her,” said Bemidji State assistant coach Shane Veenker. “We have picked up that mentality as a team. There aren’t many parades or funerals around here. We try to keep an even keel and we go as she goes.”

It was Veenker who recruited Mowat. She was from Glenboro, Manitoba, playing for the Pembina Valley Mohawks against Shattuck High School in Winnipeg four years ago. Her teams won three provincial championships and Mowat also won a silver medal with Team Manitoba at the U18 Nationals.

“She was tremendous,” recalled Veenker from the tournament in Winnipeg. “She anticipates everything so well. But only one other school offered her a scholarship.”

Veenker acknowledges that Mowat’s 5-foot-7 inch stature might have kept her from more offers and points out that only two Manitoba goalies have ever got Division 1 college scholarships. When Bemidji State made her a scholarship offer, Veenker acknowledges Mowat rejected the offer because it wasn’t a full ride.

“She has the most quiet confidence of anyone I have ever seen,” said Veenker, a Bemidji assistant for the last 10 years. “She wanted a full scholarship and she wasn’t going to settle for anything else.”

That self-assured nature translates onto the ice.

Like many farm kids from Manitoba, Mowat has been playing hockey since she was five-years-old and has been a full-time goalie since 12.

“My parents were kind of against it, but they knew I really wanted to play goal so they gave in,” Mowat says. “I think they are glad now, even if it is a stressful position.”

If the lack of scholarship offers causes Mowat to play with a chip on her shoulder, you would never know it by chatting with her.

“Bemidji has been a great fit for me,” she says. “I knew I wanted to stay close to home and there aren’t many schools near where I live. I guess I was a no-name. I have just worked hard and my team in front of me has helped me a lot.”

As a former Bemidji State goalie under legendary coach Bob Peters, Scanlan can analyze Mowat’s play expertly. He knows he was quite fortunate to inherit a goalie of Mowat’s caliber when he took over from Steve Sertich behind the BSU bench last season.

“I think she got a break her first year and got an opportunity to play because of injuries,” said Scanlan, who was named WCHA Coach of the Year in his first season. “She got into a role where she played all the time.”

Mowat made the All-WCHA Rookie Team in 2013-14 and set multiple rookie records at BSU, including games played (33), wins (10) and goal- against average (2.42). She posted three shutouts and had a 50-save performance against Ohio State, making a name for herself and the Beavers. She impressed Scanlan right away.

“I was very, very impressed with her composure,” said Scanlan. “She has a very calm demeanor. She doesn’t get too excited about much of anything, but she is extremely competitive. She hates to be scored upon.”

Technically, what makes the goalie with the blonde ponytail under her headgear so good?

“She is upright,” Scanlan said. “When she goes down, she still seems to stay upright. She squares up to the puck very well. She is a gamer. The bigger moments don’t seem to phase her. The bigger the game, the bigger she plays. We talk a lot about the mental things involved in goaltending. Keep your eye on the puck all the time. But I try to keep the goalies alone. The position has changed a lot since I played.”

If Mowat is the face of Bemidji State hockey’s resurgence these days, the heart is the way the Beavers block shots. They led the WCHA in blocked shots last season, feature two of the best shot-blocking defenseman in Ivana Bilic and Alexis Joyce, and frustrate teams by clogging up the neutral zone like the freeway at rush hour.

“It is kind of the Beaver legacy, to be honest,” said Mowat. “My defense has made it easy for me. They keep pucks to the outside and block a ton of shots. When I came here as a freshman, that was our motto: Block shots and get your body in front of the pucks. That is what we do.”

There are no pre-game goaltending rituals necessary to understand the Beavers’ success. They were beaten twice by Wisconsin, the No. 1 team in the country, by scores of 3-0 and 4-0, last month, but in the rest of the WCHA season, the Beavers have scored 17 goals and given up only six in eight games. They are 10-2-1 overall and 7-2-1 in WCHA play with 22 points and in second place, one point better than Minnesota.

“We try to be a team that is tough and is not fun to play against,” said Scanlan. “We talk about doing little things. You have to credit the players. Blocking shots can be contagious. Somebody does it and the whole bench erupts. They saw last year what happens if you play hard. When you play against a team like Wisconsin or Minnesota they are going to have the puck more than you are. You better know what you are doing in your end, getting in shot lanes.

“The players realize it can lead to our team being successful. They know it is one of those little things that we have to do well. If we do it well, it can lead to a good habit. (Against Wisconsin in the first game of a series in Madison), they had us for 26 blocked shots. If you look at a goalie’s save percentage and you figure teams score on one of every 10 shots, that may have saved us two goals. And you never know, you might get one going the other way. That’s what Coach Peters used to always say.”

If teams get through the maze of clingy Bemidji defenders, then they have to face Mowat, who shared honors with North Dakota’s Shelby Amsley-Benzie as an All-WCHA first team goalie last season and set program records for wins, goals-against average and save percentage in a single season. Those numbers made her Bemidji’s first, first team All-American goalie. BSU’s Zuzana Tomcikova, who played in the Olympics for Slovakia, was a second team All-American in 2012.

“That was a big surprise for me,” said Mowat. “My team deserves a lot of credit for it too.”

The awards kept coming after the season for Mowat, too. The exercise science major was named a WCHA Scholar-Athlete and then completed her sophomore year with the news that she had been named Bemidji State’s Female Athlete of the Year.

“I was shocked because there are so many good athletes at Bemidji State,” said Mowat. “I had to prepare a speech and I didn’t know what to say. I was completely shocked. I never expected it.”

Following the season, Mowat was invited to Team Canada’s national women’s strength and conditioning program, but suffered an injury and returned home to concentrate on her junior year, a season where the Beavers have changed their image under the old goalie, Scanlan, and the new goalie, Mowat. Bemidji State heads into Friday and Saturday’s game with Minnesota as more of a WCHA contender than an in-state rival.

“We have big expectations,” said Mowat. “We lost a couple key players, but we have some good freshmen. We have big goals. We need to continue working hard and I think everything will gel.”