ALL Eyes On The Prize 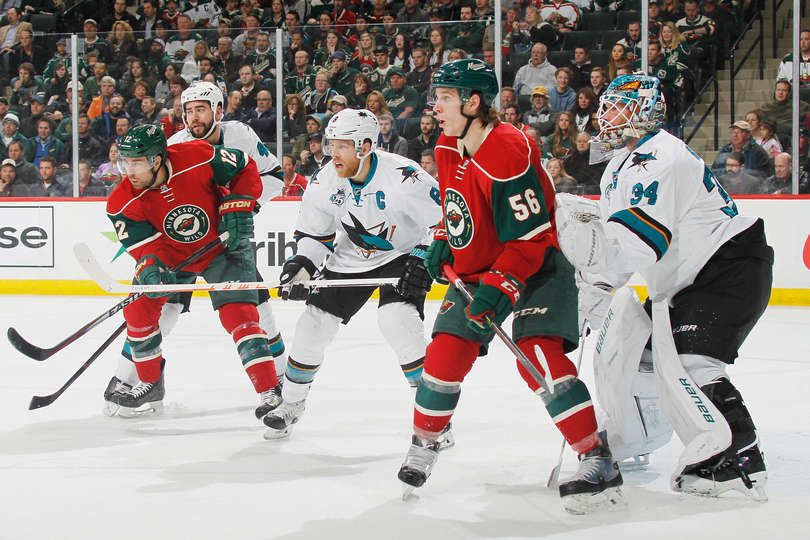 St. Paul – There is no figuring the Minnesota Wild this season.

And that’s just during one period.

Ask them, however, and they will tell you it doesn’t matter.

It doesn’t matter because they are in the playoffs. The Wild lost 3-0 to the San Jose Sharks Tuesday night at the Xcel Energy Center and were booed off the ice, but the Nashville Predators defeated the Colorado Avalanche 4-3, eliminating the Avs the from Stanley Cup Playoff race.

Minnesota locked up eighth place in the NHL Western Conference with 87 points and one game remaining, earning a spot in the playoffs for the fourth consecutive season.

Sure, the Wild have lost four in a row, and sure, they needed consecutive losses by the Avs to lurch into the playoffs.

But, said Wild interim coach John Torchetti, “I think everyone’s missing the point. You know, there’ve been different peaks and valleys this year, but the bottom line to it all is we peaked at the right time and we got into the playoffs. That’s a big thing for this team.”

The Wild have gone 15-10-1 since Torchetti took over on Feb. 14, which he insists is not “backing in” to the playoffs.

“You earn every single point,” he said. “And every single team wants to be in the playoffs, and we’re there. So we can talk about it like we won six in a row. That’s probably what brought us there. So why don’t we talk about that rather than losing tonight.”

If the Wild were inconsistent under previous coach Mike Yeo – and they were, earning him a dismissal with a 23-22-10 mark including losses in his final eight games – that inconsistency has not exactly dissolved under Torchetti.

Two times since Feb. 14 the Wild won four in a row and then they won six straight in March. But they also lost two straight two times before this current four-game streak. And they bounced back.

“The guys have done a great job,” Torchetti said. “They could have folded when I got here, too, so I’m really proud of them.”

Winger Zach Parise, who tied with teammate Nino Niederreiter for a game-high four shots on goal as Minnesota outshot the Sharks 29-20, said the loss by Colorado should eliminate one problem.

“Enough with the negativity and we can move forward,” Parise said.

“It’s you guys,” Parise said, gesturing toward the media. “I was talking about you guys.”

The Wild managed just five shots on goal in the first period and fell behind when Logan Couture scored 4:43 after the opening faceoff. Goals in the second and third period by Patrick Marleau ruined any possible celebration expectations for the 24th consecutive crowd of 19,000-plus.

Negativity? There were a few boos as the Wild left the ice trailing 2-0 after two periods, and many more when they trudged off at game’s end.

“We have to get our game in order,” defenseman Ryan Suter said.

But four losses or four wins mean nothing if the team nonetheless makes the playoffs, goalie Devan Dubnyk said.

“Your goal during the season is to get into the playoffs, and we’re in the playoffs,” Suter said. “Now our goal is to win the Stanley Cup. We have to prepare to be ready to accomplish that.”

Dubnyk called it “a strange week,” referring to potential ups that spun into gloom. He added, “It’s been talked about the last week, so it’s nice to get it out of the way and we can shift our focus. I don’t know it that was affecting what we were doing, but it doesn’t have to any more.”

Torchetti admitted that his players need to get back to skating fast and playing with “more energy.” But it’s likely, he noted, that clinching a playoff berth should help the mental aspect, at least.

“Maybe this,” he said, “will loosen some guys up.”