All the way from the Bay 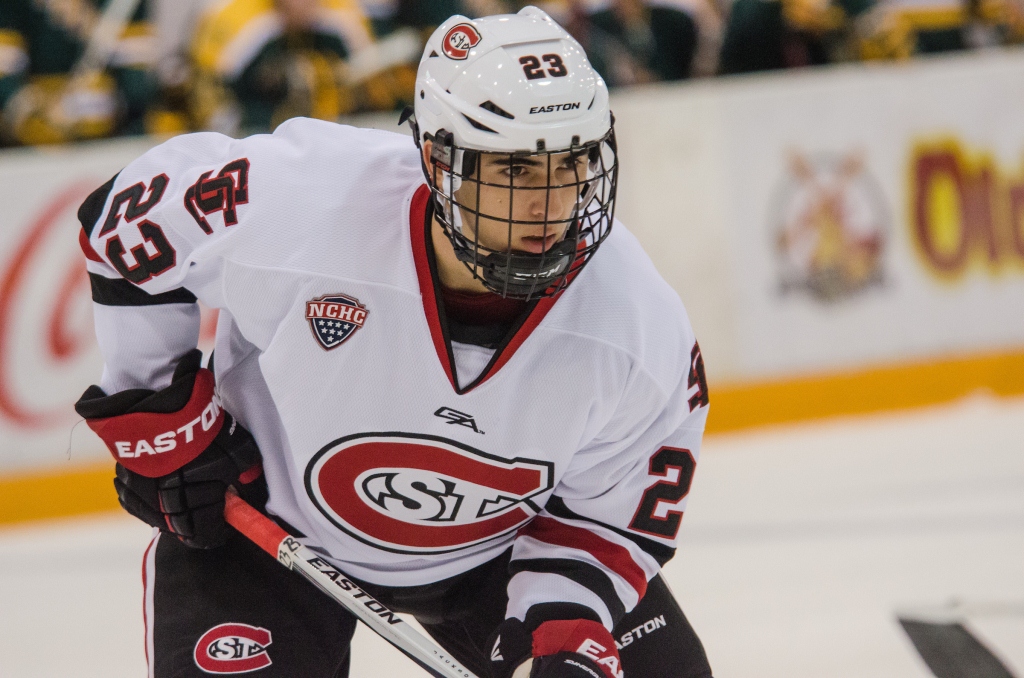 ST. CLOUD – In Minnesota, there’s never a shortage of hockey players whose biographies detail charming tales of the hours spent on frozen ponds as a youngster, aside from their organized practices and games.

The water doesn’t freeze over in Alameda, Calif., where Jackson grew up, but there were a few activities he was able to come up with, living on an island in the San Francisco Bay.

“One thing my buddy and I would do is take golf balls and hit them into the bay towards Oakland,” said Jackson, an 18-year-old freshman wing at St. Cloud State.

Not an activity that will improve hockey skills, but Jackson’s inability to partake in shinny with friends didn’t hurt his future.

The transition from 70 degrees-and-sunny to Minnesota’s winter climate has been an easy one for Jackson, perhaps because of a mild December or experiencing winter while playing two years of juniors in in the Upper Midwest or the fact that he’s already becoming an impact player on SCSU’s offense.

Jackson had six goals and three assists through his first 13 collegiate games for the Huskies. The freshman notched his second multi-goal game with two in SCSU’s 4-1 win Dec. 4 against No. 6 Omaha.

Though Jackson didn’t register a point in any of the Huskies’ 11 goals in a road sweep of Denver Dec. 11-12, he has the most goals (six) out of any of SCSU’s freshmen and ranks 11th nationally in freshmen goal scoring.

“Scoring goals is never not fun, especially when you score two in a game,” Jackson joked.

Jackson started playing hockey in the Bay Area but moved south to play at the club level for the Los Angeles Junior Kings when he was in high school.

That’s when SCSU began to notice the kid from California.

“My first visit (in St. Cloud), I was 16 and it was -10 degrees,” Jackson said. “(SCSU assistant coach Mike Gibbons) kept telling me ‘it’s sunny and 70 every day here in St. Cloud.’ I packed khakis and a hoodie. That’s winter clothes in California.

“Every time I tell people I’m from California, they make the jokes about me surviving the winter,” Jackson said. “But it’s like ‘c’mon, spare me, I’ve been here before.’”

Fellow freshman Patrick Newell is Jackson’s roommate in the dorms and both are native Californians, though Newell comes from Thousand Oaks, a city located 40 miles west of Los Angeles.

Both played for the Jr. Kings, but in different age groups, and didn’t meet until they arrived in St. Cloud.

The next step for Jackson is to establish a steady contribution to SCSU’s offensive output as the Huskies, ranked fifth in the Dec. 14 USCHO poll, flip the calendar to 2016 with games against Arizona State Jan. 1-2 in St. Cloud.

“Our four freshman forwards will get better. Sometimes you just have to put your hands over your eyes and let them learn, because we’re trying to find more depth 5-on-5.”

Jackson scored twice in his first college game on Oct. 10 at Alaska-Anchorage, but scored just once in the next 11 games going into the Dec. 4 game against Omaha.

“Everyone likes scoring, so you do get a little discouraged when you aren’t scoring,” Jackson said. “When there’s any stretch where you’re not putting it in the back of the net, you just have to keep your nose to the grindstone and try not to focus on it too much.”