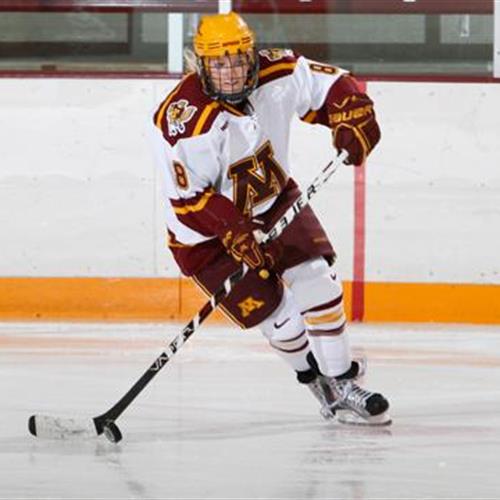 Amanda Kessel (Madison, Wis.), a junior forward from the University of Minnesota, was awarded the 2013 Patty Kazmaier Memorial Award today at the McNamara Alumni Center on the campus of the University of Minnesota. The award, in its 16th year, is presented annually to the top player in NCAA Division I women’s ice hockey by The USA Hockey Foundation.

Kessel was named the winner of the award during a sold-out brunch ceremony at the McNamara Alumni Center on the campus of the University of Minnesota. She was chosen for the honor from a group of Top-3 Finalists that included two of her Gopher teammates – senior defenseman Megan Bozek (Buffalo Grove, Ill.) and senior goaltender Nora Räty (Espoo, Finland.)

“Amanda has had a historic season. Her domination on the ice this year has been nothing short of phenomenal. The number of points that she compiled is just one indication of her impact on our team,” said Brad Frost, head coach at the University of Minnesota. “She has proved to be the most dynamic offensive threat in all of NCAA women’s hockey, but her contribution goes much farther. She has grown into a complete two-way player, playing at an elite level in the defensive zone, on the penalty kill, and certainly in the offensive zone. Her domination of the statistical categories speaks for itself.”

During her breakout junior campaign, Kessel has helped the Gophers to an unblemished 40-0-0 record, giving the team a unanimous No. 1 ranking in theUSA Today/USA Hockey MagazineWomen’s College Hockey Poll each of the 21 weeks it has been released this season.

In WCHA play, Kessel notched 75 points (34G, 41A) in 25 games, leading each offensive scoring category. She also led the league with 23 power-play points (6G, 17A) and earned WCHA Player of the Year accolades. Her 3.00 points per game led the WCHA and she ranked second in short-handed points (2G, 2A) and game-winning goals (6).

Off the ice, Kessel is active in the local community and volunteers her time at places such as HopeKids, Feed My Starving Children, Amplatz Children’s Hospital and several local elementary schools.

ABOUT THE PATTY KAZMAIER MEMORIAL AWARD
An award of The USA Hockey Foundation, the Patty Kazmaier Memorial Award is annually presented to the top player in NCAA Division I women’s ice hockey. Selection criteria includes outstanding individual and team skills, sportsmanship, performance in the clutch, personal character, competitiveness and a love of hockey. Consideration is also given to academic achievement and civic involvement.

ABOUT PATTY KAZMAIER
The Patty Kazmaier Memorial Award is named in honor of the late Patty Kazmaier, who was a four-year varsity letter-winner and All-Ivy League defenseman at Princeton University from 1981-86. An accomplished athlete who helped lead the Tigers to the Ivy League Championship in three consecutive seasons (1981-84), Patty Kazmaier-Sandt died on Feb. 15, 1990, at the age of 28 following a long struggle with a rare blood disease.