Wherever Minnesota State’s Bryce Gervais goes, goals are sure to follow 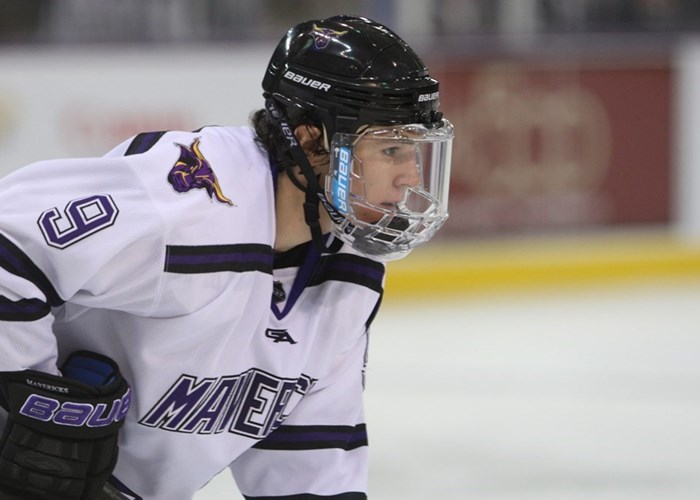 Wherever Minnesota State’s Bryce Gervais goes, goals are sure to follow

Historically speaking, Bryce Gervais has always been a goal scorer.

Upon graduation from high school, the Battleford, Sask. native went on to play in the tier II junior A British Columbia Hockey League for the Salmon Arm Silverbacks where he posted 29 goals and 51 points in 58 games as a rookie.

He improved the following season to a BCHL-leading 42 goals to go along with 33 assists in a season split between Salmon Arm and the Penticton Vees. After winning the RBC Cup as the Canadian National Champions with the Vees, Gervais headed south to Mankato, Minn. to play his college hockey in the Western Collegiate Hockey Association.

As a rookie for Minnesota State University Gervais played in all 41 games for the Mavericks, posting eight goals and five assists, respectable numbers for a freshman. In his sophomore season in 2013-2014, Gervais emerged as one of the top guns for MSU and was playing his best hockey at the end of the season.

“One thing I try to do before every game is focus on what makes me good,” Gervais said. “Usually if I’m playing physical and with speed I can get to the puck faster which creates more offense.” 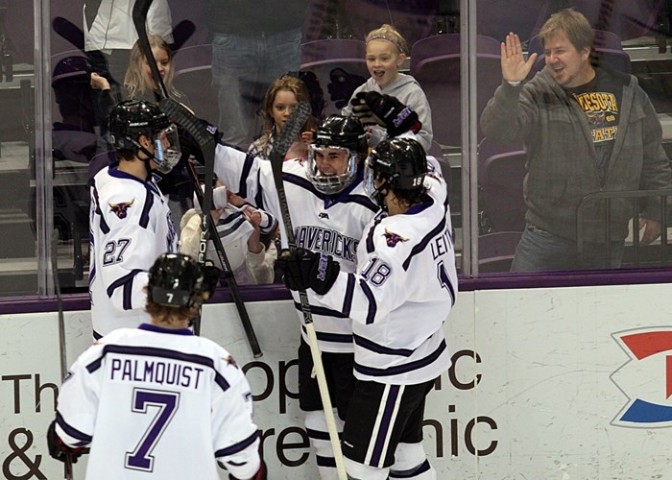 Bryce Gervais (center) celebrates with teammates after scoring one of his two goals in a Feb. 14, 2014, game against Alabama-Huntsville at the Verizon Wireless Center in Mankato. (Photo / Minnesota State University Athletics)

After posting eight points in the first 25 games of his sophomore campaign, Gervais got hot and scored 11 goals and 18 points over the final 16 games to double his goal production from his freshman season, and ended up with 16 goals and 26 points on the year.

With his breakout sophomore season, the expectations for Gervais to produce this season were higher than they were a year ago. He has lived up to, if not exceeded, those expectations as a junior as his success over the second half of last season has had a significant carry-over effect.

Ten games into the current season, Gervais ranks first, not just in the WCHA, but in the NCAA in points scored with 14. His nine goals have him tied for first in the nation with Bowling Green’s Kevin Dufour, and his four power play goals are also tied for first in the country. Consistency has been the theme for Gervais so far this season, as he has been held pointless in just two games, but has yet to be held pointless in a series.

Gervais was named WCHA Offensive Player of the Week after recording his first career hat-trick in a Maverick sweater two weekends ago at Bowling Green. He carried that success into this past weekend when he had a four-point game on Friday night versus Bemidji State with two goals and two assists.

Gervais isn’t just a goal scorer, though. On Saturday night versus BSU, Gervais saw big minutes on the penalty kill, and set the screen for two of Teddy Blueger’s three goals. He also assisted on one of Blueger’s goals, helping his linemate earn his first career hat-trick.

Watching him play, it’s easy to see Gervais’ game is built on speed and tenacity. His greatest asset is perhaps the ability to get into the gritty areas and find himself open.

“I try to find open spaces,” Gervais said. “If I’m not open I try to get open. It also helps when you’re playing with some really skilled play-makers like Matt Leitner or Teddy Blueger, they always seem to get you the puck.”

While his quick start this season will keep him on the radar of college hockey fans and opposing coaches, Gervais is trying to keep his attention on getting the Mavericks further in the postseason. So how can the Mavericks do that?

“Winning our league,” Gervais said. “Making it to the NCAA tournament and not only making it but winning a few hockey games while we’re there which would push us to our ultimate goal, the Frozen Four.”

While the season is still young and there is plenty of hockey left to play, Gervais has established himself as one of the top players in the WCHA this season, and also one of the best in the NCAA.