Ducks hold on for 2-1 win over Minnesota, sweep season series 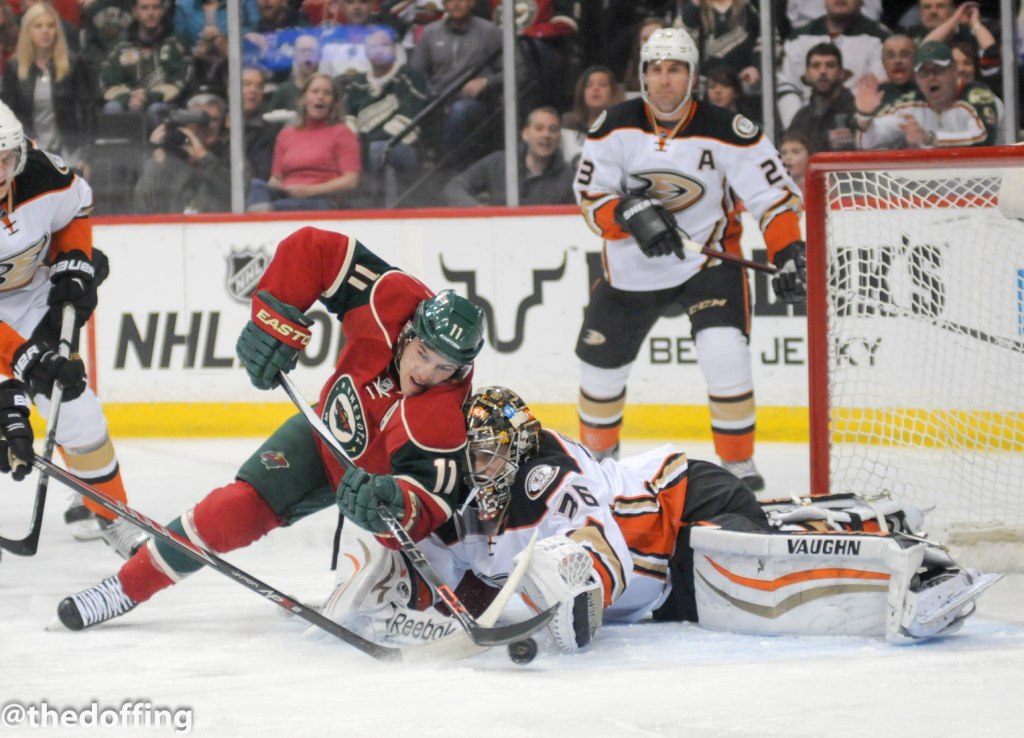 Ducks hold on for 2-1 win over Minnesota, sweep season series

St. Paul — Those hoping for a Wild-Anaheim postseason playoff matchup might want to re-think their wants.

The NHL-leading Ducks withstood nearly everything the Wild offense had to offer Friday night and escaped the Xcel Energy Center with a 2-1 victory in front of 19,045, the 500th regular-season sellout for Minnesota.

Anaheim goalie John Gibson made 32 saves and the Wild went just 1 for 5 on the power play to suffer their sixth consecutive home loss to the Ducks.

The Ducks swept the season series 3-0 from Minnesota.

All three losses were by one goal, and there is little question that the Wild had a territorial edge for much of the evening Friday, but the Ducks held on.

“We had some good chances late in the game but we just weren’t able to bury it,” Wild defenseman Ryan Suter said. “That’s a good team. Their goalie played well.”

And suddenly, that spell of Minnesota reeling off one win after another is just a memory: Not only was this the Wild’s second loss in a three-game homestand, it kicked off a very difficult closing run for a team that has little room for error.

The Wild packed their bags Friday night for a flight to St. Louis and a Saturday match against the Blues, then get the Nashville Predators, the Washington Capitals and the Blues again in the coming week.

The good news: Friday’s result left the Wild with 81 points, tied with Calgary for fifth most in the Western Conference and still three points ahead of Winnipeg in the wild-card race.

“I don’t think we can be too down,” Wild coach Mike Yeo said. “It stinks not getting two points, but we just have to keep things in perspective. We did a lot of good things.”

Yeo and Suter both lamented the Wild’s missed power-play chances.

“It’s a power-play, penalty-kill game, and we’ve got to be able to get a couple.”

The Wild rank 28th in the NHL with just a 15-percent success ratio with a man advantage.

“It hasn’t been an issue because we’ve been winning games,” Yeo said. “Certainly going forward it’s something we’re going to have to address.”

The Wild’s lone goal came when Thomas Vanek’s bad-angle shot went directly to Zach Parise in front, who put it away on the power play.

That tied the score 1-1, but Matt Dumba’s turnover led to a goal by the Ducks’ Jakob Silfverberg just 2:14 later and that proved to be the winner.

“That was just a bad play by me,” Dumba admitted.

Everyone makes mistakes, Yeo pointed out, but they loom large when the opposition is Anaheim, which leads the league with 93 points.

“It seems like every time we play them it starts to feel like there’s one play that’s going to make the difference in the game,” he said. “Obviously it’s not exactly one play, but there were certainly moments in that game, whether it’s on one side or the other, that we could have grabbed ahold of it.”