Anderson: Refs are people too

Hockey ought to be enjoyable for all … officials included 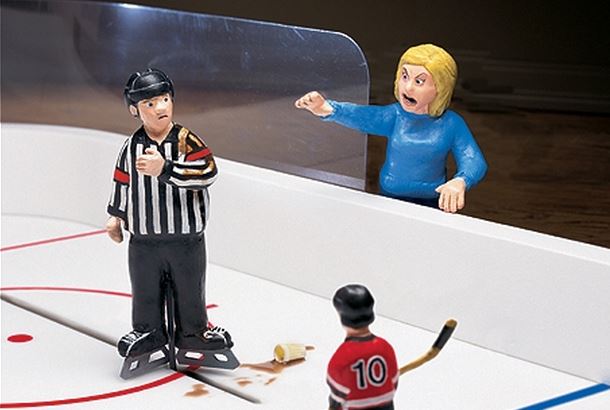 Hockey ought to be enjoyable for all … officials included

My Pee Wee team hit the pavement last weekend for our long-awaited and highly-anticipated road trip to the North Woods. The kids got enough pool time and junk food to permanently cover their skin in chlorine rashes – and propel them to mother-of-all sugar highs.

After four games in three days we had a tired 12-year-old in the car. Once his Mother was done having him drawn and quartered psychologically with a weekend’s worth of ignored homework, we settled into a peaceful journey home.

The quiet of a car full of tired kids and parents can give the driver ample time to re-hash the weekend.

I was mentally scouring the trip for things like “Which team parent wore the lampshade”?  A question I will leave unanswered to protect the not-so-innocent Hockey Mom or Dad from embarrassment.

Or how about this one – “Did I really leave the X-Box power cord in the hotel room”?

The answer is yes, and my son told me a little piece of him died inside once he discovered the oversight.

Finally – “Why on Earth are parents and coaches so rude and mean to referees?”

And that’s what this entry is about.

I have been a youth hockey coach for almost 10 years…3 of which have been as the head guy. During my time on the bench I have made every effort possible to be respectful and polite to the officials we work with.

You see, I get the impression that the men and women blowing the whistles care just as much about the well-being of the kids on the ice as everyone else in the rink.  I really believe that, and you should to.

The guys working our Sunday game had a tough day. It was their third of the afternoon and they were gassed.  One team was huge and not afraid to use their size to their advantage, and the other team (mine) had some kids that decided to play the game in a manner that would have made Freddie Shero proud back in the ‘70’s.  I also (regrettably) had words with and for “the stripes”.  The opposing bench gave it to them just as badly, and it was a close championship game which added to the tension.

After the horn I made a point to go beyond the handshake ritual and get their thoughts on what had transpired.

The lead official was apologetic for letting things get out of hand, admitting he was tired and probably should have clamped down a little more. I apologized for raising my voice during a discussion of an uncalled offsides that led to a goal, and we discussed how we all could have handled the situation differently to create a safer and more positive environment for the kids.

That – to me – is what the relationship between officials and coaches should be about, especially at the younger levels of play. Work together in the best interests of the children to ensure their safety (and enjoyment) in a given game and future games.

As we parted ways, with me headed into a locker room full of kids conspiring to shake up bottles of soda and spray each other, the officials (hopefully on their way to a well-deserved refreshment and meal) mentioned the volume and tone of the rhetoric which had been coming from the stands throughout the weekend.

As a coach, I usually don’t hear it. I’m busy talking to the kids, switching lines, looking for my coffee, and wishing I had used the bathroom before opening faceoff.

After a hotly contested game like Sunday’s, I try to get a report from a parent or kid on how things went in the cheap seats … actually, with the cost of hockey I don’t think there’s ever a cheap seat … but I digress.

My wife gave me a slightly sheepish look and admitted things had been a little salty during the game. There were bodies flying, kids getting dinged, nets being knocked off posts right before (or maybe slightly after) the puck had crossed the line and other random acts the parents (on both sides) took exception to.

I spend a lot of time in hockey rinks and I enjoy sitting down and taking in a youth game even if my kids aren’t skating. I’m also the last guy in the world that wants to contribute to the notion that hockey parents are more crazed than other sport’s moms and dads. That said, the rhetoric I’m hearing in the stands this season (mostly directed at officials) is getting stupid. Maybe it’s been like this forever and I’m just noticing now, but for the life of me I can’t imagine why anyone would want to grab a whistle, skate onto the ice and expose themselves to that kind of garbage.

At the Pee Wee level, we pay a little over $70 for two officials to work an exhibition game. Assuming the District is getting a piece of the action, the paycheck is in the neighborhood of $30 per game. At that rate, I think it’s safe to guess most of the officials aren’t in it for the money.

Have I had a direct conversation with a referee to understand their motivation for doing what they do? No. Am I confident in assuming part of it is a passion for sports, and kids’ sports in particular? Yes. With that in mind, I’m going on record asking hockey parents to think before they shout at the officials during their child’s games. Stop and ask yourself if it’s really good form to bellow insults from the stands, knowing the impressionable youngsters can hear every word. As a problem solver (self-proclaimed), I’ve created some simple guidelines…..

Hockey is fun, watching it is fun, and playing is fun. Being an official should be an fun too … let’s respect that from the (not so) cheap seats.