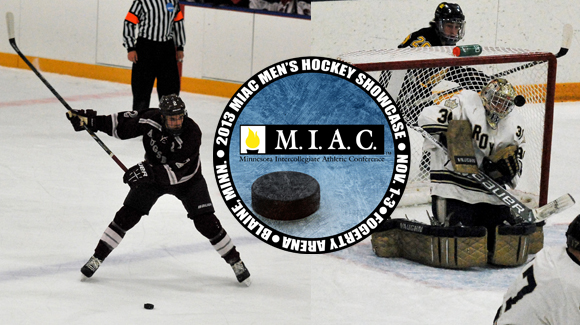 BLAINE, Minn. — Three more Minnesota Intercollegiate Athletic Conference (MIAC) men’ s hockey teams made their 2013-14 season debuts Saturday as the 2013 MIAC Men’s Hockey Showcase continued. The second day of action was highlighted by the first overtime game in the MIAC this season, a successful debut for Concordia and another impressive Augsburg effort.

St. Thomas and Bethel nearly squared off in the first shootout in NCAA Division III and MIAC history as the two battled to a 2-2 tie into overtime, but the Tommies got a game-winning goal a little over a minute into the extra period to start their season with a 3-2 victory. Concordia got defensive in its 2013 debut to hand Saint John’s a 2-0 to end the Johnnies’ showcase appearance with a 1-1 record. And for the second day in a row, Augsburg was one of the most impressive teams on the ice as the Auggies became the first MIAC team to start 2-0 thanks to a 3-1 win over St. Olaf in the Oles first game of the season.

ST. THOMAS 3, BETHEL 2 | Box Score |
Bethel was headed for its first victory of the 2013-14 season a day after falling a goal short in its 2013-14 debut, but St. Thomas got a pair of clutch goals from Connor McBride in the third period and overtime to pull out the thrilling 3-2 victory. St. Thomas opens the season 1-0, while the Royals end their trip to the MIAC Showcase with a pair of one-goal losses and an 0-2 record.

Bethel got a standout effort from Mitch Hughes, who scored both the Royals’ goals. He started the scoring in the second with a goal 4:07 into the period on an assist from Brock Raffaele. Then, after St. Thomas tied the game on an unassisted Tyler Richter goal, Hughes struck again less than a minute into the third to give Bethel another lead. Raffaele and Eric Szafranski assisted on the go-ahead goal.

But then McBride took over. With less than 12 minutes to play, he cashed in on a power play and an assist from Nick Nielsen to tie the game. Neither team scored the rest of the way to force the first MIAC overtime of the new season. McBride didn’t need long to settle things in the extra session, cashing in just 1:08 into overtime with the game-winner. Richter and Jordan Lovick assisted on the final goal.

Each team had a pair of players with two points as McBride, Richter, Hughes and Raffaele each tallied two points in one of the most entertaining games of the Showcase thus far. Drew Fielding stopped 16 of the 18 shots he saw to earn the win in St. Thomas’ net, while Bethel’s Dan Harper was a busy man, making 43 saves in the loss. The Tommies out-shot the Royals 46-18, and Bethel committed four penalties to three for UST.

CONCORDIA 2, SAINT JOHN’S 0 | Box Score |
The Cobber defense and clutch scoring appeared to be in midseason form in the team’s 2013-14 debut, as Concordia kept Saint John’s off the scoreboard and won the game 2-0 with a pair of goals in the game’s final nine minutes. Concordia goalie Chris Neamonitis made quite the season debut, stopping all 29 shots he faced to shut out the talented Johnnies. The Cobbers start the season 1-0, while Saint John’s split its two Showcase games and is 1-1.

After the two teams battled to a scoreless tie over the game’s first 50 minutes, Concordia finally broke through with the game-winner and an insurance goal to ice its first win of the season. Caleb Sudeman scored an unassisted goal 11:31 into the third period for the eventual game-winner, and Jordie Bancroft sealed the deal with an empty net goal with just four seconds to play. Tucker and Sam Coborn both assisted on the insurance tally.

Saint John’s Mitch Thompson was nearly as good as his Concordia counterpart in the defensive battle. Thompson stopped 32 shots in the loss, allowing just the lone third-period goal. Justin Hochsprung had six shots to lead the Johnnie offense and Tyson Fulton took four shots. The Cobbers out-shot the Johnnies, 34-29, and both teams were good on the penalty kill, as both were 0-for-5 on the power play.

AUGSBURG 3, ST. OLAF 1 | Box Score |
For the second game in a row, Augsburg raced out to a big lead and hung on for a win to start the 2013-14 season 2-0, becoming the only MIAC team to go 2-0 at the Showcase thus far. Saturday, the Auggies scored once in the first and twice in the second en route to a 3-1 win over St. Olaf in the Oles’ first action of the young season.

For the second day in a row, Augsburg also got all its goals from different scorers. Ben McClellan started things off with an unassisted goal 5:40 into the game. Niklas Almstrom made it 2-0 with a power play goal 8:56 into the second period. In the final two minutes of the period, the Auggies pushed its lead to three goals when Dylan Meier lit the lamp. Tom Kuhn assisted on both second-period goals and Lucas Hendrickson and Zach Blaisdell also notched assists in the win.

St. Olaf foiled the Augsburg shutout bid 5:18 into the third period, as Dan Ceka scored an even-strength goal to give the Oles their first tally of the season. Tim Tuscher assisted on Ceka’s score. However, St. Olaf couldn’t muster any more offense in the 3-1 loss.

John Bretzman earned the win between the pipes for Augsburg, stopping 16 of the 18 shots he faced. Henrik Wood came up with 25 saves in the loss, as the Ole goalie faced 28 shots and allowed three goals. St. Olaf was 0-for-3 on the power play, while Augsburg was 1-for-5.

THRILLING CONCLUSION COMING SUNDAY
The 2013 Showcase concludes Sunday starting at 1 p.m. with Concordia versus Hamline. Saint Mary’s will square off against St. Olaf at 2:30 p.m. on the north rink, and the event will conclude with St. Thomas and Gustavus going head-to-head on the south rink at 4 p.m.