Could win over Leafs be deja vu all over again for Minnesota? 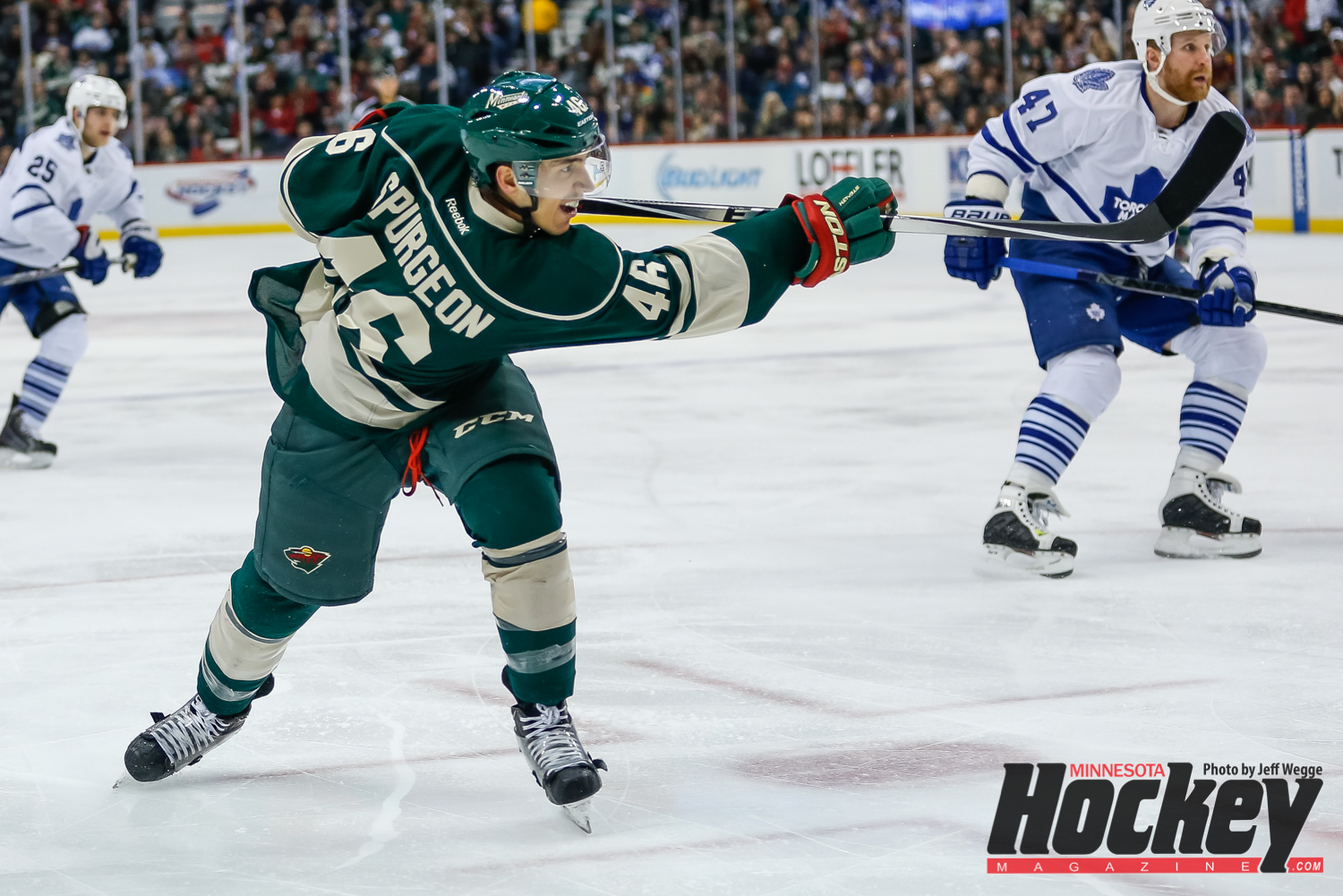 Minnesota D Jared Spurgeon watches his shot go in the Toronto net for what ultimately became the game-winning goal in the Wild’s 3-1 win over the Maple Leafs on Friday, Jan. 2 at Xcel Energy Center in St. Paul, Minn. (MHM Photo / Jeff Wegge)

Could win over Leafs be deja vu all over again for Minnesota?

SAINT PAUL – For the second straight season, a struggling Minnesota Wild team opened its calendar year against a team based not far from Niagara Falls. And as was the case 12 months ago, the visitors took the fall.

Goals by Jared Spurgeon and Mikko Koivu 1:55 apart midway through the third period broke a 1-1 tie and lifted the Minnesota Wild to a 3-1 win over the Toronto Maple Leafs in front of a nearly bipartisan crowd of 19,168 on Friday night at Xcel Energy Center in St. Paul.

The Wild entered 2014 losers of six straight and 13 of 18 — including a 5-4 loss to the Islanders in which Minnesota blew a 3-0 lead over the game’s final 37 minutes — to begin the New Year 20-17-5 for 45 points. After a 15-5-4 start, the calendar-closing collapse had rumors swirling that a Jan. 2 loss to the lowly Buffalo Sabres would spell the end for coach Mike Yeo.

Turn the clock forward exactly one year and the Wild came into Friday’s game against Toronto having lost 11 of 17 and began 2015 with a 17-14-4 record for 38 points, seven less than a year ago. Yet the matchup with the Maple Leafs came without the implied win-or-else ultimatum of that came with the Sabres game last January.

The Wild beat Buffalo 4-1 that day to spark a 23-10-7 finish and qualify for the Stanley Cup Playoffs and Minnesota is clinging to the hope that lightning will strike twice as the team’s health steadily improves.

Minnesota began Friday’s third period nursing a 1-0 lead courtesy of a Kyle Brodziak goal, but consecutive penalties to Spurgeon and Ryan Suter early on gave the Leafs a 5-on-3. Toronto was more than happy to take advantage of the advantage and tied the game on Cody Franson’s sixth of the year at the 2:37 mark.

But Spurgeon’s right circle blast from the right circle at 7:23 and Koivu’s wicked power-play one-timer from nearly the same spot at 9:18 sent the Maple Leafs to their sixth loss in eight games.

“I liked how we played after we got the lead,” Minnesota coach Mike Yeo said. “We didn’t sit back.”

The key to the win, according to Yeo, was the way Minnesota elevated its game once Franson tied things up, something the team failed to do in a 3-1 New Year’s Eve loss to Columbus.

“Tonight, the talk on the bench, leadership-wise and the way that we finished the [penalty] kill and then went back out afterwards and reclaimed the lead, that’s a big moment,” he said. “There’s been a lot of talk about killer instinct and that’s what you’re looking for.”

The Wild’s Captain, though, pointed to another important factor in the win.

“I thought our defensive effort was huge and that’s our identity too,” Koivu said. “Arguably, we’re a tough team to play against when we’re on top of our game and that’s what we need to do.”

Wild goaltender Darcy Kuemper bounced back from the loss to the Blue Jackets with 34 saves to pick up his 13th win of the year. Kuemper, who spent some time away from the game and his recent struggles over the holidays, says he’s feeling good about his game now.

“There was no technical parts that were missing from my game before,” Keumper said. “It’s just more of a mindset so I think I’m in a good place there and the team is playing really good in front of me as well.”

With Leafs netminder Jonathan Bernier (26 saves) looking strong, including a point blank stop on Thomas Vanek just under five minutes into the game,  Kuemper  sknew he had to play well to give his team a chance.

“I saw [Bernier] make a few big saves early and knew it would probably be a little tough to get a few, so I just tried to do my part,” he said.

Koivu said patience was important with Bernier playing as well as he was and added Kuemper was a part of that.

“It’s not easy [to be patient] but I thought Kuemps was doing good too so that gives you that confidence too when you know that your goaltender’s on top of his game,” Koivu said. “So you have to be patient and believe that you’re going to get your chances.”

“We’re just playing simple and working hard,” Spurgeon added. “We talked about having a lot of energy and I think we had that tonight.”