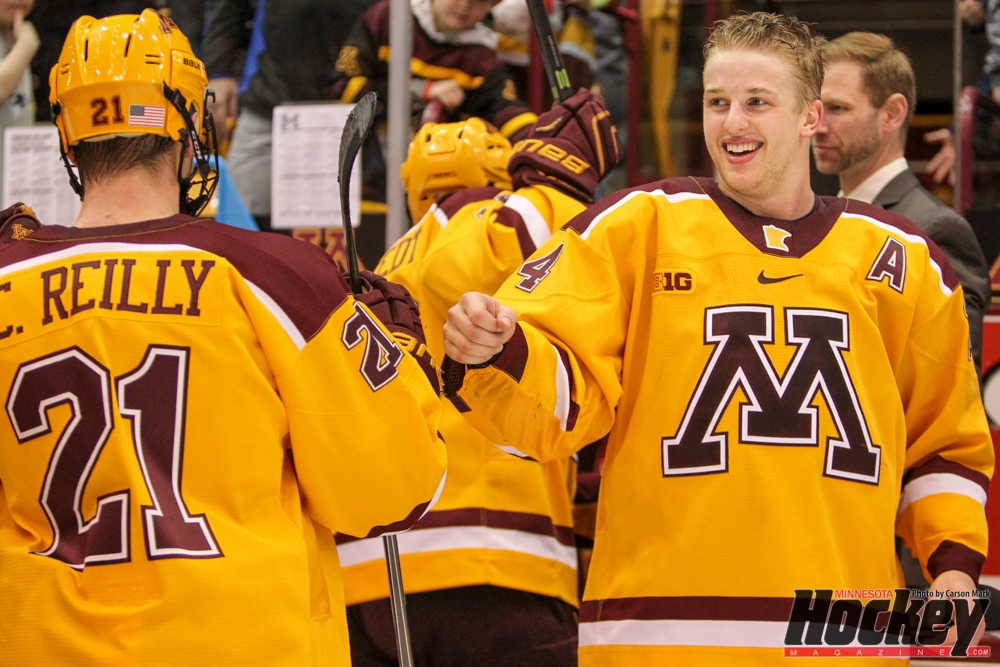 Minneapolis — Hudson Fasching’s overtime one-timer propelled Minnesota to a 3-2 win over Michigan and kept the Gophers ahead of the Wolverines in the Big Ten Standings. Minnesota (12-4-0-0, 17-14-0) had a one point lead over Michigan (10-3-3-2, 20-5-5) in the conference coming into the weekend and the series split maintained their lead.

“Just like when we were in Ann Arbor, the goal was to stay ahead of Michigan at the end of the weekend,” said Minnesota Coach Don Lucia. “They’re a good team, there’s no question. There’s a reason they’ve lost two overtime games the second half of the season, they’re dangerous, and we had to play a complete game.”

Michigan comes out of the weekend still behind the Gophers by a point in the standings and will need help from the Spartans and Badgers. They finish the season with two series against a swift skating fifth place Ohio State (4-8-3-1, 9-17-3) for a home and home series, and then a offensively focused third place Penn State (9-6-1-1, 19-9-4) squad at Yost Arena for two games.

“We like where we are, we wanted to get more than a split when we came here,” said Michigan Coach Red Berenson. “I think Minnesota is probably pretty happy with a split right now. We’ve got to take advantage of our remaining games and see what happens.”

Penn State still has an outside chance to get into the top two of the conference with 29 points, six behind Michigan and seven behind Minnesota, and get a bye for the first night of the Big Ten Tournament at Xcel Energy Center. The Nittany Lions have their series left at Michigan, but also have to travel to Madison.

The Gophers control their destiny as they seek a third consecutive Big Ten regular season title and fifth consecutive conference title. Minnesota has the easier road remaining in the Big Ten with a road trip to face fourth pace Michigan State (5-10-1-0, 9-20-3) and then finishing their regular season with sixth place Wisconsin (1-10-4-2, 6-15-8) at Mariucci Arena.

Minnesota fell to No. 18 in the PairWise Rankings after the loss Friday night, but the split pushed them back to #16 in the ranking determining at-large bids for the NCAA Tournament. The teams ahead of Minnesota, include No. 12 Nebraska-Omaha, No.13 Massachusetts-Lowell, No. 14 Penn State, and No. 5 Cornell.

The Gophers can secure a post-season automatic bid by winning the Big Ten Tournament, but the win on Saturday kept their chance of an at-large bid alive. Although for Minnesota to get an at-large bid they’ll need help from the teams ahead of them.

Nebraska-Omaha is fourth in the NCHC, but has a brutal finish with North Dakota and a trip to Denver. Massachusetts-Lowell is fourth in Hockey East, but finishes their regular season with Boston College. Cornell is seventh in the ECAC, plays Union and Rensselaer before their conference tournament. Miami is sixth in the NCHC and plays Colorado College and at University of Minnesota-Duluth to enits regular season.