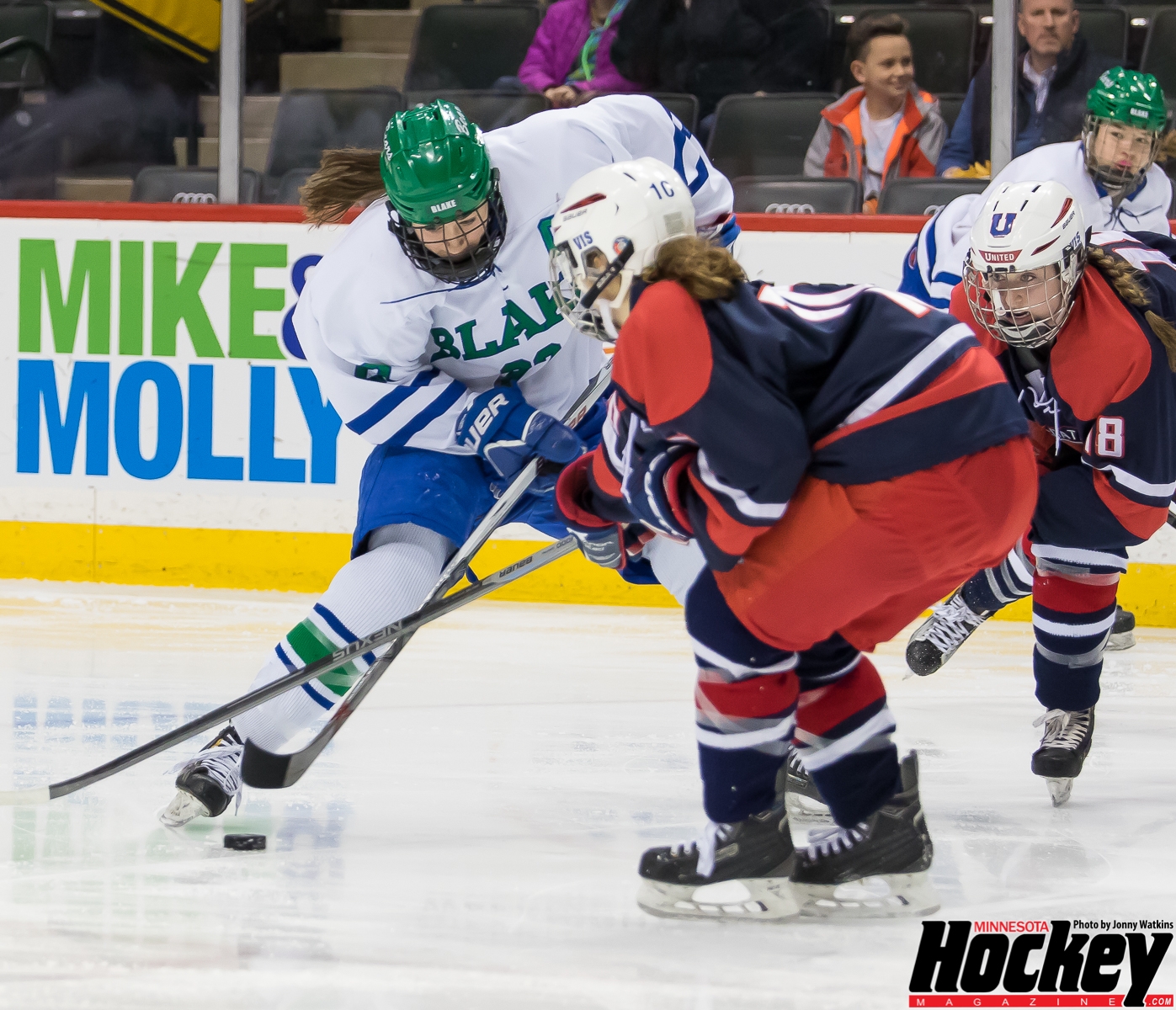 The Blake Bears (26-2-2) lost in the championship final last year to Thief River Falls. They made no mistake about putting an exclamation point on this season with the Class 1A state title victory over No. 3 seed St. Paul United (23-6-1) Saturday at Xcel Energy Center. Blake also won two regular-season meetings with St. Paul United, by scores of 3-1 and 3-2.

It marks the third title in four years for the Bears, as they also won back-to-back titles in 2013 and 2014. They’ve won a state-best six state titles overall.

“As a team, we knew that this year we were just going to totally go all the way,” Burton said. “Especially after what happened last year, all the returners had a really icky feeling in our mouth, I guess.”

Safe to say that icky feeling didn’t stick around Saturday.

The first hat trick of the game came together in a span of 4:24 from Burton, who came into the game without a goal in this tournament. Reid moved her to Bullock’s line early in the game. Bullock assisted on two of Burton’s goals.

“After Lucy’s second shift, it was very clear that she had something tonight,” Reid said.

For Bullock, she saved the best for last.

Her first two goals of the game gave Blake a 2-0 cushion in the first period.

“She buries them. That’s what she does,” said St. Paul United coach Nate Mauer. “She opened it up. She’s a naturally-gifted goal scorer.”

That second goal, her 21st in her state tournament career, tied the all-time tournament record for goals scored with Krissy Wendell. With 24 seconds left in the game, Bullock put her name solely at the top of the list with 22 goals. She had 10 in this tournament.

Bullock said she wasn’t aware of the record before the game. She was just looking at the net on that 2-on-1 near the end.

“Twenty-two goals. That’s ridiculous,” Reid said. “It’s been so much fun coaching her.

“It’s amazing. For the four years I’ve been with her, she has cored numerous overtime goals. Numerous times she has called her goal.”

That final goal also capped a Bullock hat trick for the second game in a row. The Ms. Hockey finalist finished the season with 58 goals. Yes, that led the Bears this season.

“For our team to play as well as we did, it’s amazing,” Bullock said, who was still hoarse after taking a slash to the throat in the semifinal game Friday afternoon. “To walk away with a state championship senior year is just the best.”

Proctor/Hermantown’s Sophie McGovern was given the Herb Brooks Award. She was also named to the All-Tournament team.