Back to the ‘Chip 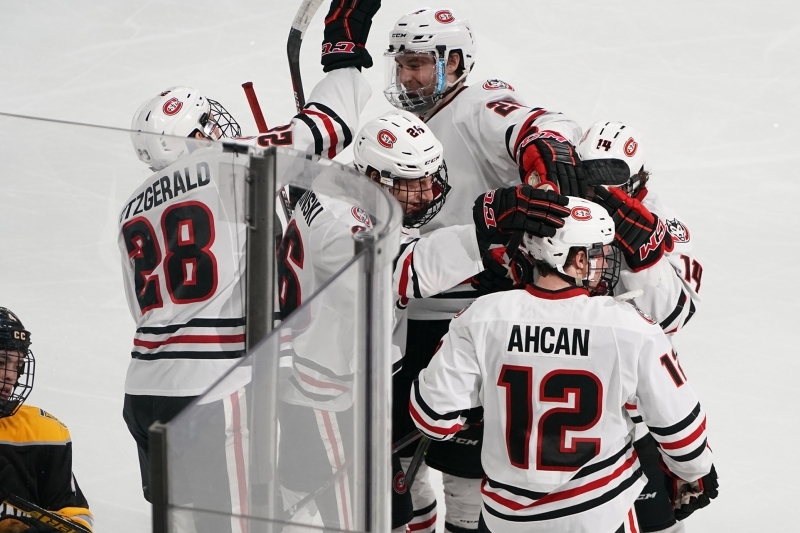 St. Paul — St. Cloud State and Colorado College faced each other four times during the regular season, twice with the Huskies ranked No. 2 in the country while Friday’s NCHC Frozen Faceoff semifinal meeting marked the third time the Tigers took on SCSU as the nation’s top-ranked team. Each of the first four meetings saw St. Cloud State come from behind to beat the Tigers and the fifth time was no exception.

After spotting CC a lead midway through the first period, the Huskies (30-4-3) answered quickly and pulled away to a 5-2 win to advance to Saturday’s Frozen Faceoff championship game for the fourth time in five years.  SCSU awaits the winner of the evening matchup between Minnesota Duluth and Denver University.

“You can tell that they’ve been battle tested and playing really tough games and fighting for their life,” St. Cloud State coach Brett Larson said. “Give CC full credit because I really liked their team, I liked their game and they were certainly tough to play against tonight.”

Patrick Newell scored a huge first-period goal and added an assist, Robby Jackson scored a highlight-reel goal in the second while Blake Lizotte and Kevin Fitzgerald chipped in a pair of assists each. SCSU goaltender David Hrenak made 31 saves, including 13 in the third period when Colorado College employed an unusual power play strategy in an effort to get back in the game.

“Sometimes when goalies are sharp, in a way they almost make it look easy because they’re not flying all over the place,” Larson said. “They’re just in the right positions and making the right save and that’s how I thought he played tonight.”

The Tigers (17-19-4) struck first in the opening period when Cloquet’s Westin Michaud fired a left circle shot that beat Hrenak at the 9:47 mark just 19 seconds after SCSU’s Robby Jackson went off for interference. Jackson’s release from the penalty box was short-lived as he was assessed a 10-minute misconduct before the ensuing faceoff, presumably over something he said to an official.

But back-to-back goals by Newell and Nolan Walker 24 seconds apart put the Huskies up for good three minutes later. St. Cloud state defenseman Jimmy Schuldt said what was clear from the first four meetings with CC is the Tigers are a team that really plays off momentum.

“They wanted to get a lead right away and they did and then they were going,” Schuldt said. “We made a couple good plays to get a lead and that’s definitely a turning point in the game and then and then I think we started rolling from there.”

A scary incident occurred between Michaud and Newell’s goals when St. Cloud State’s Ryan Poehling lost an edge and tumbled awkwardly into the end boards to the right of the Colorado College net. The brunt of the impact was taken by Poehling’s facemask and the former Lakeville North star was tended to for several minutes on the ice before skating off mostly under his own power but he did not return.

Larson said it was too soon to know the severity of Poehling’s condition, revealed only as an upper body injury, with further evaluation of one of his top scorers (8 goals and 31 points) to come on Saturday.

“Obviously, it doesn’t matter who it is that was a scary moment,” Larson said. “I know everyone’s holding their breath on the bench, but I can tell you he is going to be okay; we’ll just see how bad the injury is by the morning.”

Another Poehling went down hard and was slow to get up at the 15:54 mark when Ryan’s brother Jack absorbed a huge hit from Colorado College’s Trevor Gooch. The high hit earned Gooch a major penalty for contact to the head and a game misconduct.

Leading 2-1 halfway through the second period, St. Cloud State struck again when Spencer Meier lofted a puck toward Tigers’ net before Jackson re-directed it out of midair and past stunned CC goaltender Alex Leclerc for a 3-1 lead.

“Spencer Meier made a great play, didn’t take any time, threw it at the net and Robbie obviously made an incredible play batting out of the air,” Lizotte said. “That’s just a credit to Robbie and his talent and ability.”

The Huskies carried that lead into the third period and extended it to 4-1 on defenseman Jack Achan’s 6th of the year with just 12:39 remaining in regulation. The final period was not without its drama, however, as Colorado College had a golden opportunity to chip away at lead.

With the Tigers already on a power play and trailing 4-1, St. Cloud State’s Jon Lizotte hit Michaud into the boards from behind in the left corner. The hit drew a major checking from behind penalty and a game misconduct on the senior defenseman and gave CC a 5-on-3 advantage for 1:25 with just over nine minutes to play.

Colorado College coach Mike Haviland wasn’t satisfied with the two-man advantage and made the aggressive move of pulling Leclerc for a 6-on-3 edge. The tactic proved unsuccessful and Leclerc returned to the crease 1:21 later.

Schuldt said he found the rare situation to be “really fun.”

“If you’re killing a 5-on-3 you have certain set lanes are to cover but a 6-on-3 is a whole different animal,” Schuldt said. “It just kind of comes down to being in the right place at the right time, I think.”

The Tigers did cut the deficit to 4-2 on Brian Yoon’s goal with 58 seconds left on Lizotte’s penalty but Nick Poehling scored two minutes later to restore the three-goal cushion.