Back Where They Belong 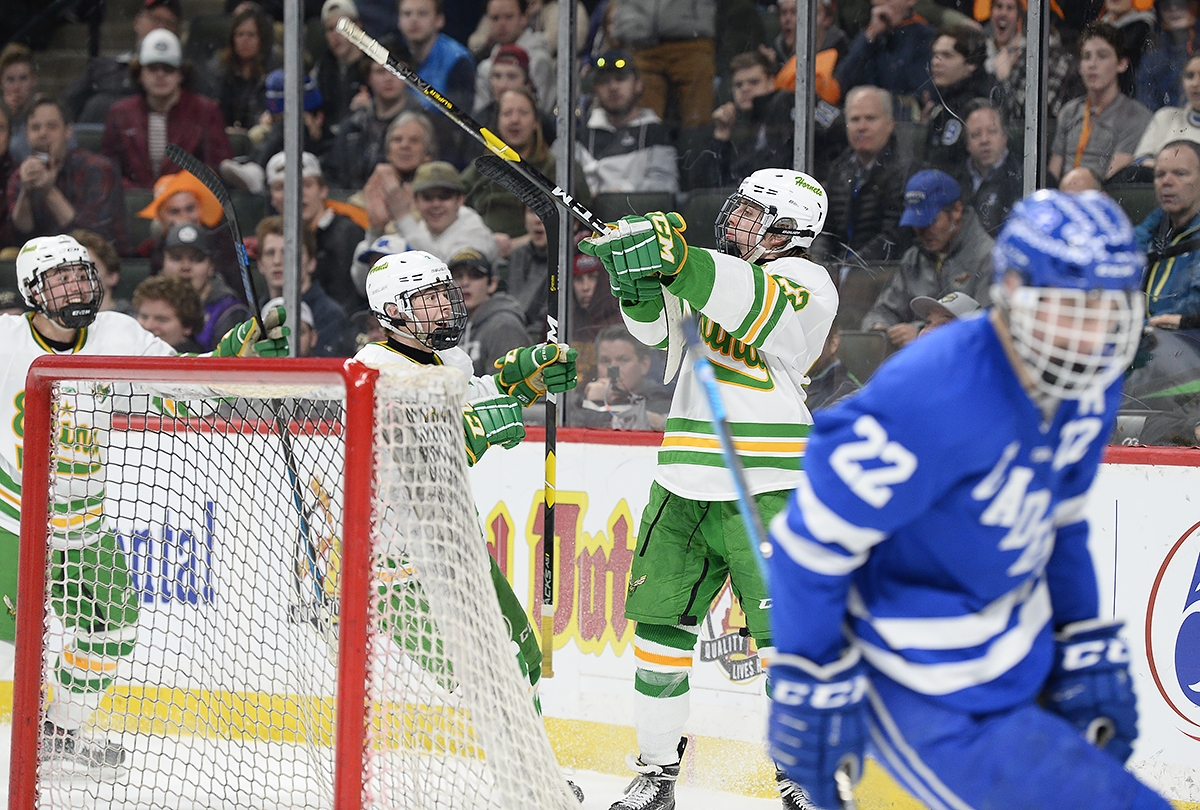 St. Paul — After a one-year absence from the state tournament, the Edina Hornets are making the most of their return with yet another championship game appearance after a 6-3 Class 2A semifinal win over St. Thomas Academy.

The Hornets blitzed the Cadets to the tune of a 17-1 first-period shot edge and a flurry of three goals in a span of 4:55 late in the period. Brett Chorske, Liam Malmquist and Jett Jungels all tallied in the opening frame to spark the Hornets.

“The biggest thing is momentum continues on,” Giles said. “They’re a really good hockey team so we needed to get a jump on them.”

Malmquist would finish with a hat trick while Jungels would score again and Chorske added an assist.

St. Thomas Academy co-coach Greg Vannelli, who along with his brother and fellow co-coach Tom was coaching his final game behind the Cadets’ bench, was at a loss to explain his team’s slow start.

“I have no idea why we came out that way,” Vannelli said. “Haven’t had it all year to have a period like that so I can’t explain it. I’m glad it changed, I’m glad we finished strong. That was more of the team we are used to. I guess it sports where sometimes that happens.”

Luke Herzog got STA on the board 1:12 into the second to make it 3-1 but Jungels restored Edina’s three-goal cushion four minutes later. Each time the Cadets would cut the lead to two, the Hornets responded.

“When you go down 3-0 any team is going to respond hard,” Chorske said. “I thought we prepared for that well and matched that. When they scored, we’d come right back so we knew there was going to be a push but I thought we handled it well.”

Rob Christy’s goal early in the third period was answered 27 seconds later by Malmquist before Carter Henry made it a 5-3 game with 9:14 left in regulation. The Cadets pressed but Malmquist completed his hat trick into an empty net with nine seconds to play.

“They’re a very skilled team and if you just try to play skill-on-skill it’s not going to work out very well,” Vannelli said. “You’ve got to get back to some basic hockey, finishing checks and things like that and I thought we did a little better job of that into those last two periods.”

Officially, the Hornets are seeking their 10th state title in their 28th appearance, but if Edina East’s three championships in five trips ar included, it’s 13th in 33 appearances. Edina will attempt that feat against No. 3 Eden Prairie which eliminated No. 2 Blaine 4-3 earlier in the evening. The Hornets defeated the Eagles three times in the regular season by 6-1, 5-2 and 7-2 scores.

“Eden Prairie’s got a different team than when we saw them last,” Giles said. “They’ve really come together very, very well at the end of the season, through their section playoffs and then into the state tournament.

“It won’t be hard to get jacked up for Eden Prairie. These kids have been playing against Eden Prairie kids since they could skate so this will be a great game and Lee’s got his team playing extremely well.”