Backs Against the Wall

Minnesota not willing to concede after one-goal loss to Stars 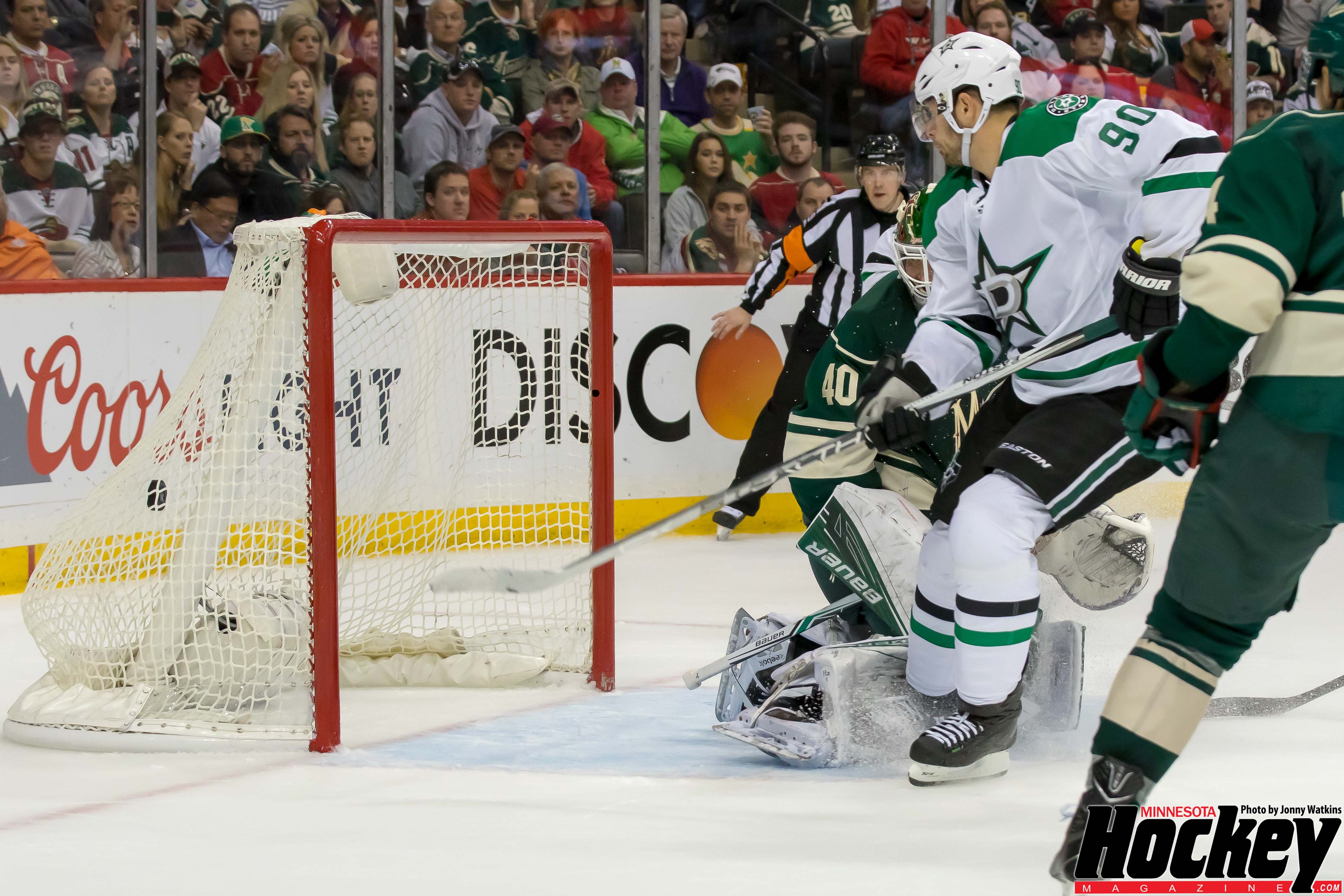 Dallas forward Jason Spezza watches what turned out to be his game-winning goal hit the back of the net in the Stars’ 3-2 win over the Minnesota Wild in Game 4 of their Stanley Cup Playoff series on Wednesday night at Xcel Energy Center. (MHM Photo / Jonny Watkins).

Minnesota not willing to concede after one-goal loss to Stars

St. Paul – If it was the final home game for the Wild Wednesday night, they went out on a pretty good note.

John Torchetti does not think it will be the last one.

The Dallas Stars scored two power-play goals and got a deflection off the skate of Jason Spezza late in the second period, then held on to defeat the Wild 3-2, sending 19,080 loud and expectant Minnesota fans home disappointed.

The win gave Dallas a 3-1 lead in the best-of-seven series; the Stars can close it out Friday night in Dallas. Minnesota needs a victory in Dallas to extend the series to a Game 6 Sunday in St. Paul.

Torchetti, who took over from Mike Yeo in mid-February and likely needs his team to win a series or two to increase his chances to become the full-time coach next season, came up from the Iowa Wild with plenty of intensity and plenty of observations about his favorite game.

“Everyone always has character when you win,” he said. “Your real character is when you’re losing. That’s the bottom line.”

Torchetti has witnessed character: This team experienced winning and losing streaks at season’s end including losing the final five games of the regular season. It was blown out of Game 1 in the playoffs before rebounding with a better effort in a Game 2 loss. It responded by taking play to the Stars in a 5-3 home win Monday.

Game 4 started on a similar note with the Wild seizing a 1-0 lead on a Jason Pominville second-period deflection and a 2-1 lead on Charley Coyle’s dazzling second-period breakaway.

“I liked our game,” Torchetti said. “We’ve just got to go and win a game in their building.”

The Wild outshot the Stars 30-22, but Dallas erased two one-goal deficits with goals on its power play.

“The story of the game was special teams,” Pominville said. “They won that battle. We played pretty well five on five. It would have been nice to have a better turnout for sure.”

Pominville says the team needs to accept its circumstances and respond.

“We put ourselves in a pretty tough spot,” he said. “We have dug ourselves out of tough situations all year, so we’ve got to do it again.”

Under Torchetti, players such as Pominville, Erik Haula and Nino Niederreiter have stepped up their games. Pominville’s goal gave him eight goals and 11 assists in his first 24 games playing for Torchetti  (he missed seven games due to injury in March) after he tallied just two goals and one assist in his final 25 games under Yeo.

Niederreiter and Haula assisted on Pominville’s goal, but the Minnesota PK proved to be a killer of the wrong kind.

“We took a couple penalties,” defenseman Ryan Suter said, “and it ended up costing us there.”

It was 2-1 and the big crowd was roaring, but Patrick Eaves scored with a man advantage from in front at 13:24 to tie it up at 2-2, and Spezza’s goal 5½ minutes later decided it.

It placed the Wild back on the edge of being finished.

If Dallas closes out the series Friday, questions will loom about the future of the Minnesota franchise: Will Zach Parise and Thomas Vanek recover decently from injuries that have them currently sidelined; who will be the head coach; what other moves are in store?

Wild players, who struggled through 82 games with just 87 points heading into the playoffs, prepared for a Thursday trip to Texas with none of those thoughts but concentrating instead on just one thing: forcing Game 6.

“We’ve got to focus on one game,” Pominville said. “Go win a game there; who knows what happens after that?”