For Nick Bjugstad and Alex Goligoski, development is rooted in outdoor hockey 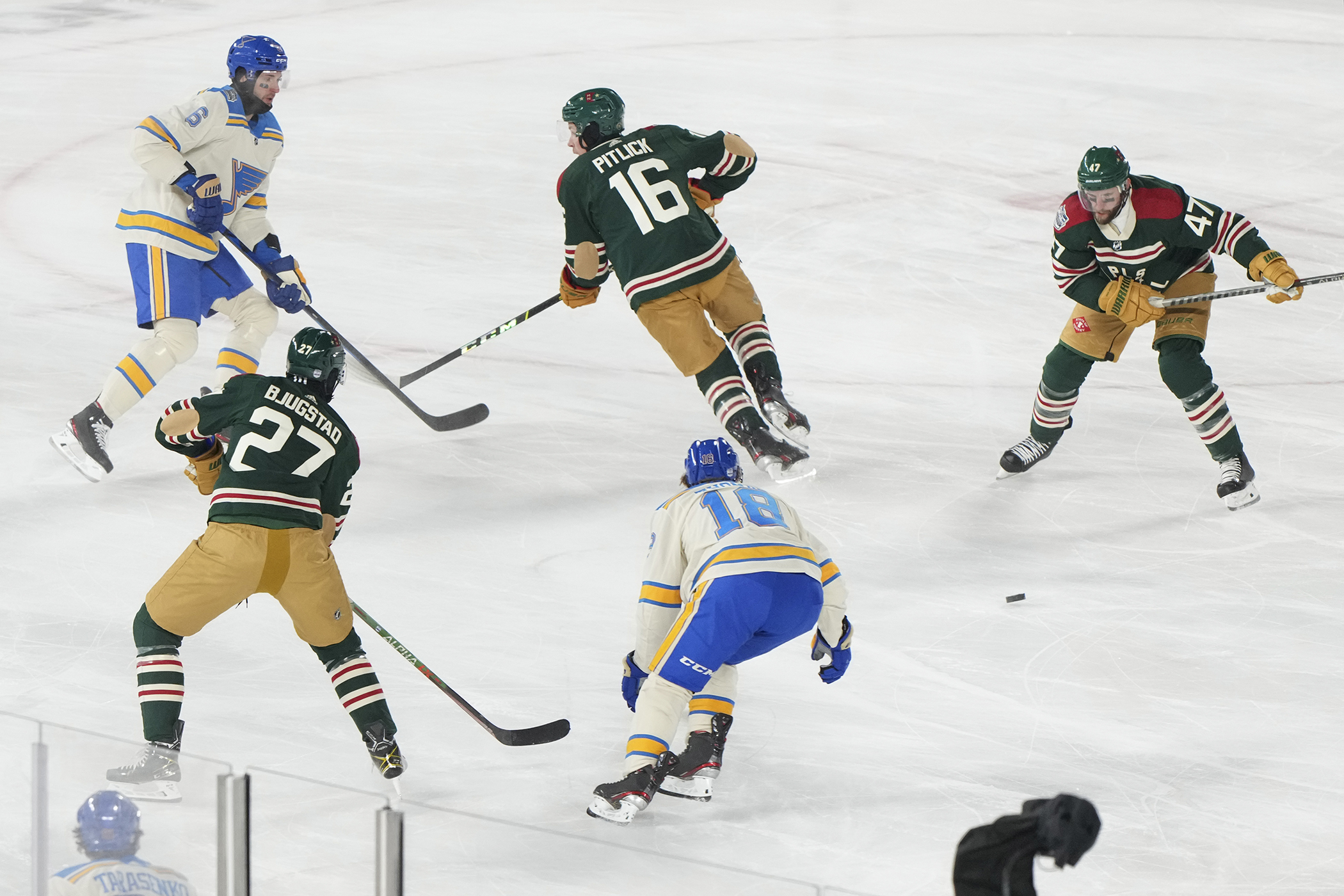 Nick Bjugstad was a sophomore with Blaine High School in the winter of 2008. Bjugstad and his teammates each bunked with a different player from the opposing team, Roseau. With temperatures below zero, Bjugstad remembers contemplating the status of their game the night before with Roseau’s Adam Knochenmus. 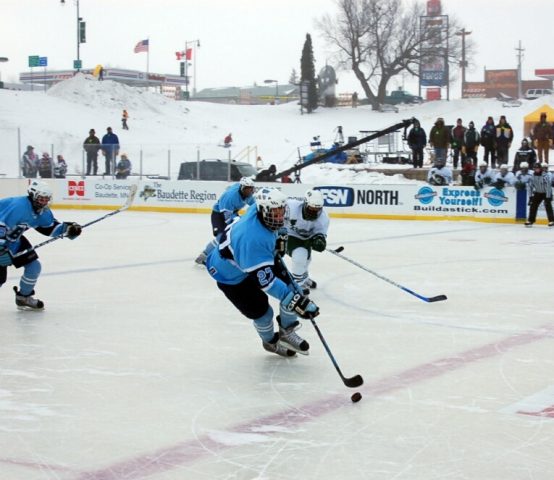 “We looked outside, and it just looked cold,” Bjugstad said. “We opened the door and we were looking at each other like, ‘there’s no way we’re playing, are we?’” Bjugstad said. “I think I was looking at it more (as a) city boy. The Roseau, northern boys, they’re a little tougher when it comes to that.”

The game went on, despite the sub-zero temps, and Roseau won 1-0 in overtime. Bjugstad compared playing in the frigid weather to continuing to play when you’re a bit injured.

“You kind of forget about it while you’re on the ice,” Bjugstad said. “The cold time is when you’re sitting on the bench.”

Saturday’s Winter Classic at Target Field didn’t see the thermometer rise above zero, with a puck-drop temperature of -5.7 degrees. So there was plenty of time for Bjugstad and his Minnesota Wild teammates to sit on the bench and chill a while. Not only was there the bitter cold to contend with, but the 6-4 Wild loss to the St. Louis Blues left the home team with a bitter feeling, having dropped their fifth-straight game.

Bjugstad recorded a hit and assisted on Rem Pitlick’s goal late in the second period in Bjugstad’s 10:25 on the ice.

Coming into Saturday, Wild defenseman Matt Dumba was the only Wild player on the ice for both the Winter Classic and the 2016 Stadium Series the Wild played on the University of Minnesota campus at the Gophers football stadium. The makeup of the team personnel may have changed quite a bit the past few seasons, but it’s Bjugstad who has the most experience playing in these type of special outdoor hockey games at various levels, from high school to the NHL.

“I guess I have the experience,” Bjugstad said. “I love playing outside. I still go out on the lake and play shinny with the neighbors.” 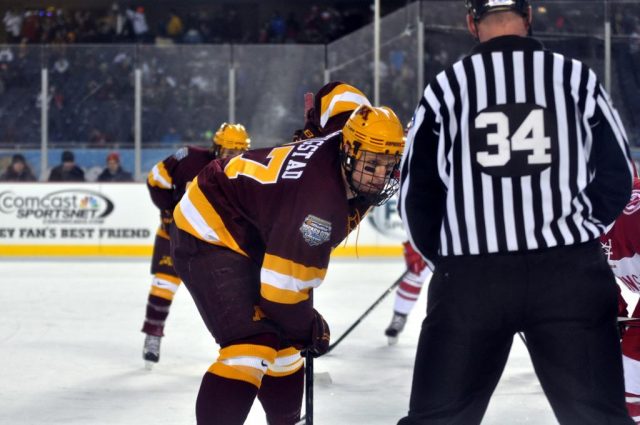 Junior forward Nick Bjugstad prepares to face off with a Wisconsin Badger in the 2013 Hockey City Classic at Soldier Field in Chicago on Feb. 17, 2103. (Photo Courtesy of Vintage Minnesota Hockey)

As a junior with the Gophers, Bjugstad played in the Hockey City Classic in February 2013 at Soldier Field. The Gophers lost 3-2 to Wisconsin, but Bjugstad and former Wild player Erik Haula assisted on Minnesota’s second goal.

The Gophers game was the second of a college doubleheader. The warmer weather with sun beaming down onto the ice made the ice conditions a bit trickier for Bjugstad and his Gophers teammates for the second game. It resulted in bouncing pucks that were unpredictable and made it tough to pass more than 10 feet, Bjugstad said.

“That was a different experience in that the ice was tough to play on, just because of the weather,” Bjugstad said. “It was such a warm and sunny day.”

Though Saturday was his first Winter Classic experience, Bjugstad played in an NHL Stadium Series game with the Penguins on Feb. 23, 2019. Pittsburgh lost in overtime 4-3 to host Philadelphia at Lincoln Financial Field. So while Bjugstad has played in outdoor games in high school, college and now two in the NHL, he’s own personal record in those games dropped to 0-4 with Saturday’s loss to the Blues.

Each game was also different in terms of the elements for outdoor hockey. Baudette Bay offered sub-zero temperatures, Chicago was in the 30s and it wasn’t too chilly playing in Philly, but the precipitation was a mix of rain and sleet, which fogged up players’ visors, Bjugstad said.

Saturday’s Winter Classic was a chance to showcase the state of hockey on a national level. Playing outdoor hockey in cold temperatures is where many players have their roots in the sport, including Bjugstad.

As a kid, he skated and shot pucks on a rink behind his house that his neighbor put together. When he wanted to play in a group setting, he ventured to Happy Acres, a three-rink outdoor facility in Blaine complete with an outdoor Zamboni, so the ice was always good, Bjugstad said. Getting to watch the high schoolers play there, or even join them, was “the coolest part” as a kid, he added.

“I grew up since I was 3 (years old) on the outdoor ice,” Bjugstad said. “It’s free in the fact that you can do whatever you want, there’s no coaches. You can kind of play a game or you can just become… creative and have fun from that aspect.

“I don’t think I’d be where I was without outdoor hockey. It’s a big part of my upbringing and skill development.”

The tradition of outdoor hockey continues for Bjugstad even now. His current neighbors put together a 100-yard rink on the lake they live on. Bjugstad said he still enjoys getting out on the open ice, in the cold air with no boards. 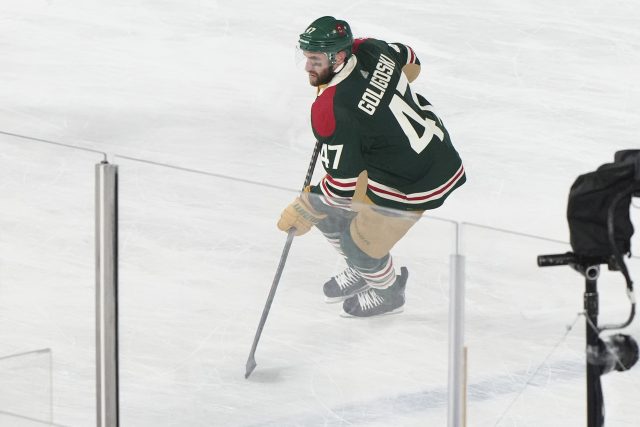 Goligoski returns home
Had the Winter Classic in Minnesota happened a year ago as planned before the pandemic shutdown, Wild defenseman Alex Goligoski wouldn’t have played the big game in his home state since he signed with the Wild prior to the current season. As a kid, he skated on ponds and rinks in his native Grand Rapids, particularly on the rink at Southwest Elementary School two blocks from his house. He went to that rink “pretty much every night in the winter,” Goligoski said.

Growing up in northern Minnesota in Grand Rapids, Goligoski should be a hearty veteran of embracing the cold to play hockey, right?

“Maybe I was. I don’t know, I’ve been living in Dallas and Arizona for the past 10 years. So I think I’m a little soft now,” said Goligoski, who played with Pittsburgh, Dallas and Arizona since his NHL debut in the 2007-08 NHL season before signing with the Wild ahead of this season.

Goligoski played in the 2011 Winter Classic with Pittsburgh at Heinz Field, a game that was warm enough to see rain fall. The Washington Capitals won that game 3-1. Goligoski recorded a shot on goal in about 20 minutes of ice time.

Wild head coach Dean Evason and assistant coach Bob Woods were part of that 2011 Winter Classic as well, on the Washington coaching staff. Evason recalled the festive atmosphere around that game, the anticipation and how exciting it was to have all the families involved as well.

Unfortunately for the Wild, they didn’t seem to have a desired consistency on the ice.

“It’s hard to reflect now, obviously, but I think once we look back on it, it’ll be an exciting experience,” Evason said after the game. “Just ended a little bit bitter, that’s all.”