Backyard No Advantage for Gophers 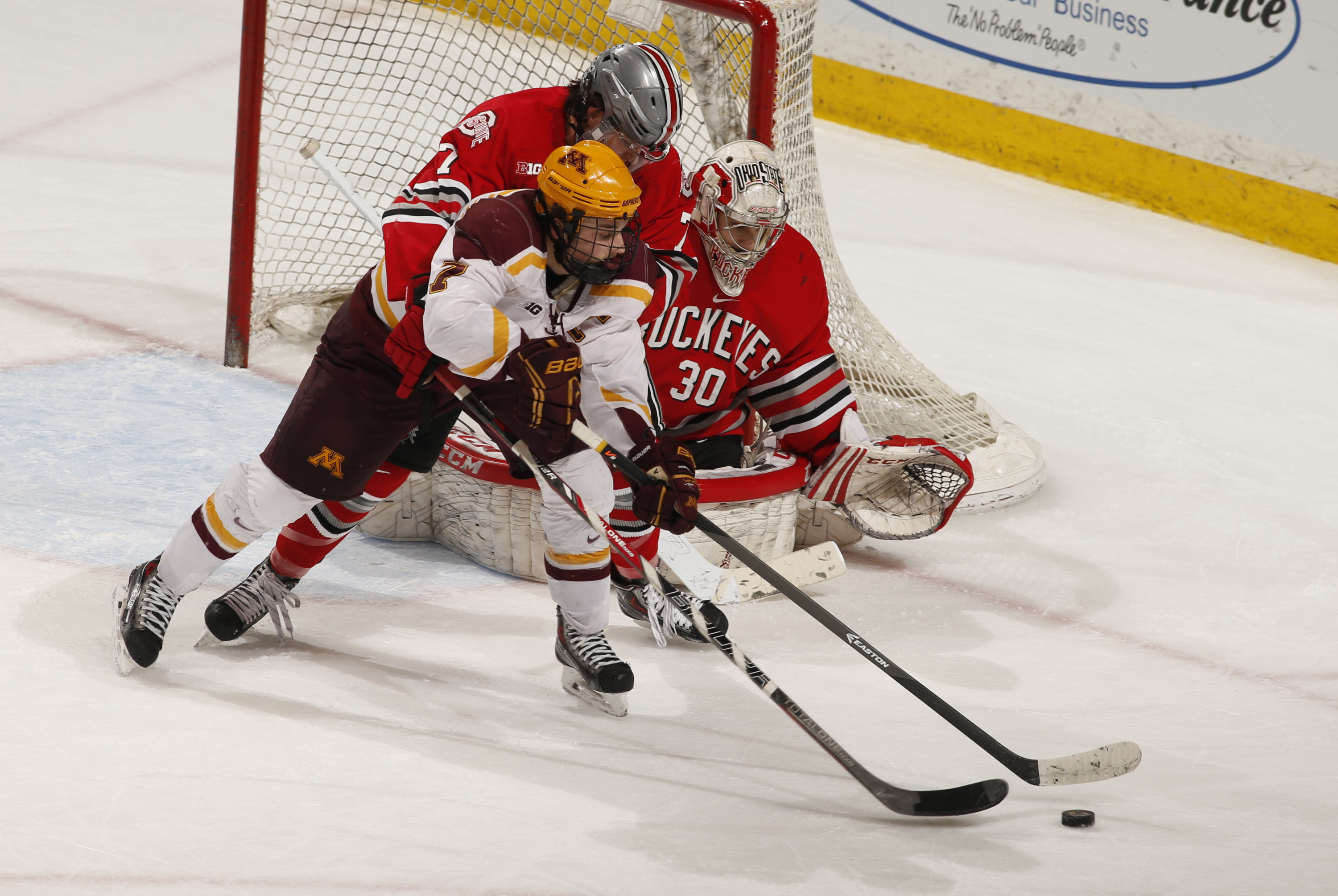 SAINT PAUL—The confines of the Xcel Energy Center have been anything but friendly to the University of Minnesota in league tournament play over the past half dozen years and a change in conferences did little to help that.

OSU’s Ryan Dzingel’s shot from the high slot using a Brady Skjei screen at 9:08 of the third period snapped a 1-1 tie and the Buckeyes held on to advance to Saturday night’s championship game against second-seeded Wisconsin which eliminated No. 6 Penn State 2-1 earlier in the day.

“I think I just closed my eyes and tried to shoot as hard as I could,” Dzingel said of his goal. “Didn’t come off as hard as I wanted it to, but it went in.”

The Minnesota loss comes six years to the day after its most recent conference tournament win at Xcel Energy Center, a 2-1 overtime victory over Colorado College in the semifinals of the 2008 WCHA Final Five. The Gophers dropped a 2-1 decision to Denver in the championship game the following night to begin what is now a five-game skid.

But Gopher forward Travis Boyd saw a silver lining in the loss.

“Half our team has been through a situation like this,” Boyd said, referring to Minnesota’s Friday night exits from the Final Five in 2012 and 2013. “Going back to my freshman year two years ago, we were able to rebound and end up winning the regional.”

OSU goaltender Christian Frey continued his strong tournament with 30 saves, including 12 in a first period in which the Gophers were dominant in stretches. On the other end of the rink, Minnesota goalie, and Hobey Baker Award candidate, Adam Wilcox turned aside 22 Ohio State shots.

Despite the loss, the Gophers know they will be the No. 1 seed in the NCAA’s West Region and will host its regional tournament March 29-30 right back at Xcel Energy Center.

“Like I told our guys after the game, this is our last opportunity as a learning experience and we don’t get any more opportunities after that,” Minnesota coach Don Lucia said.

Ohio State, on the other hand, remains in a must-win situation against the Badgers if it is to advance to the NCAA tournament.

But Ohio State coach Steve Rohlik has been in this situation before as an assistant to Minnesota-Duluth coach Scott Sandelin when the seventh-seeded Bulldogs swept their way to a Final Five title and an improbable NCAA tournament berth. Rohlik said he assured his team it can be done.

“Yeah, it’s three games in three nights, but you also have another great opportunity to play another great team in Wisconsin,” he said. “You’re playing for a chance to win a championship and play in the NCAA tournament.

“I think our guys are pretty excited about that chance.”

The Buckeyes opened the scoring at 15:20 of the first period making quick work the game’s first power-play opportunity. OSU’s Tanner Fritz’s tape-to-tape pass from the left circle set up Nick Schilkey at the doorstep for his 13th of the season just 15 seconds after Minnesota’s Nate Condon went off for interference.

The assist was Fritz’s third point of the tournament after registering a goal and an assist on the game winner in Ohio State’s 2-1 victory over Michigan State on Thursday night.

The opening period did not come to a quiet conclusion as the Buckeyes nearly found themselves with a two-goal cushion at the first intermission. With the puck deep in the Minnesota zone, OSU’s Anthony Greco’s centering pass hit Wilcox in the back and trickled along the goal line as the final second ticked away.

Max McCormick managed to poke the puck over the line but the would-be goal was waived off immediately by the nearest official and replays confirmed time had expired before it went in.

The Gophers got on the board just short of the five-minute mark of the second period and under a minute into their third power play of the game. As Travis Boyd was checked along the wall in the Ohio State zone he slid a pass to Taylor Cammarata who found Kyle Rau as he was streaking to the weak side post for Rau’s 12th of the year.

Minnesota stormed the Ohio State net with an outstanding shift by its top line of Rau, Sam Warning and Hudson Fasching surrounding the 12 minute mark of the final period. But Frey, with a little help from the crossbar, withstood the Gopher barrage.

Shortly thereafter the puck did find its way over the goal line behind Frey, much to the delight of the Gopher faithful. But after a review, it was correctly ruled that Seth Ambroz punched it in with his glove.

The delay may have robbed the Gophers of some momentum as they rarely threatened after that and struggled to get Wilcox off the ice for an extra attacker before Greco’s empty-net goal sealed it with 27 seconds to go.

Rohlik didn’t downplay the significance of his team’s accomplishment in beating Minnesota in its backyard but he’s looking forward to the challenge ahead.

“We just beat the best team in the country tonight,” Rohlik said. “It’s a good feeling, but we’re not done yet.”