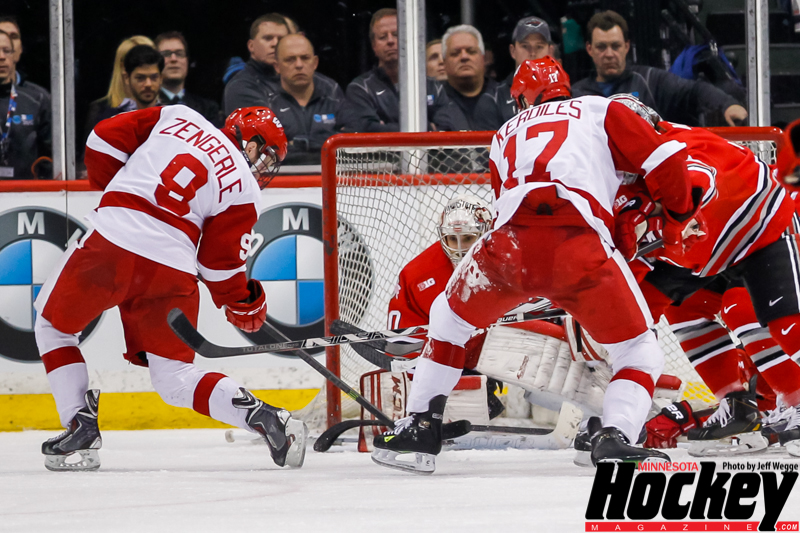 SAINT PAUL—The true measure of a team lies in how it responds to adversity and both Wisconsin and Ohio State faced its share in the inaugural Big Ten Men’s Hockey Tournament championship game on Saturday night at Xcel Energy Center.

Ohio State never trailed in regulation but was playing with its season on the line, needing a win in order to secure a berth in the NCAA Tournament. Wisconsin, on the other hand, twice fought back from two-goal deficits including 4-2 with just 6:52 remaining in the third period after a goal by OSU’s Tanner Fritz.

But goals by Jefferson Dahl and Tyler Barnes in the next 48 seconds tied the game at 4-4 and Mark Zengerle’s tally 7:48 into overtime earned the Badgers the first-ever Big Ten Hockey Tournament title.

As a puck battle ensued between the hash marks in front of Ohio State goaltender Christian Frey, Zengerle swooped in to harness the loose puck and score his 10th of the year.

“We gave it all we had, Wisconsin just came on there at the end,” Ohio State coach Steve Rohlik said. “Our guys were ready, we were prepared, and [Wisconsin] just had the last shot.”

“It’s still a little bit of a blur to be honest with you,” Zengerle said when asked about the goal. “The puck was kind of hopping around and people were whacking at it in front there in the slot and I kind of just made my way around, it popped out and I got a little bit of wood on it.”

The Buckeyes were trying to duplicate Wisconsin’s 2013 WCHA Final Five feat of winning back-to-back-to-back and get into the NCAA Tournament the only way they could.

“We were in their boots last year, we know what it takes,” Wisconsin coach Mike Eaves said. “They were a desperate team, they played their fannies off and they can walk out of this building with their heads held high.”

“We had made the analogy that, going into the playoffs and this tournament and beyond, is like trying to climb Mount Everest. The higher up you go, the less oxygen there is in the air and games get tougher. Tonight was a tough game.”

The Buckeyes grabbed the early lead on Ryan Dzingel’s 22nd of the season at 4:51of the opening period.

Dzingel, who scored the game winner in Ohio State’s 3-1 win over Minnesota on Friday, picked up a loose puck along the left wing boards at the Badger line, made a beeline for the Wisconsin net and beat UW netminder Jake Rumpel clean.

Barely more than four minutes later, Ohio State doubled its lead with Dzingel playing a role once again. Rumpel saved Dzingel’s initial shot as well as Nick Schilkey’s follow-up attempt but, by then, was so far out of position OSU’s Nick Oddo simply fired into an empty net for his ninth of the year.

The Badgers drew the game’s first power play when OSU’s Drew Brevig was sent off for interference at 19:07 of the first and Wisconsin needed only a half minute to draw back within a goal.

Jake McCabe’s wrister from the high slot past Buckeyes goaltender Christian Frey thanks, in part, to an inadvertent screen by Frey’s teammate Curtis Gedig and it was 2-1 OSU after one period.

The teams traded goals 76 seconds apart just past the halfway point of the second period on goals by Wisconsin’s Morgan Zulinick and Ohio State’s Clark Cristofoli to make it 3-2 and set the stage for the third period drama.

“I’m really proud of our guys in the locker room,” Rohlik said. “They emptied their tanks this weekend, they gave it all they had and it’s all that I asked. It’s a big, big step for our program.”

Eaves said the lessons learned from the game will serve his team well as the Badgers move further into the postseason.

“I thought our group showed some maturity getting behind twice by two goals,” Eaves said. “That maturity and steely resolve paid off for us.”