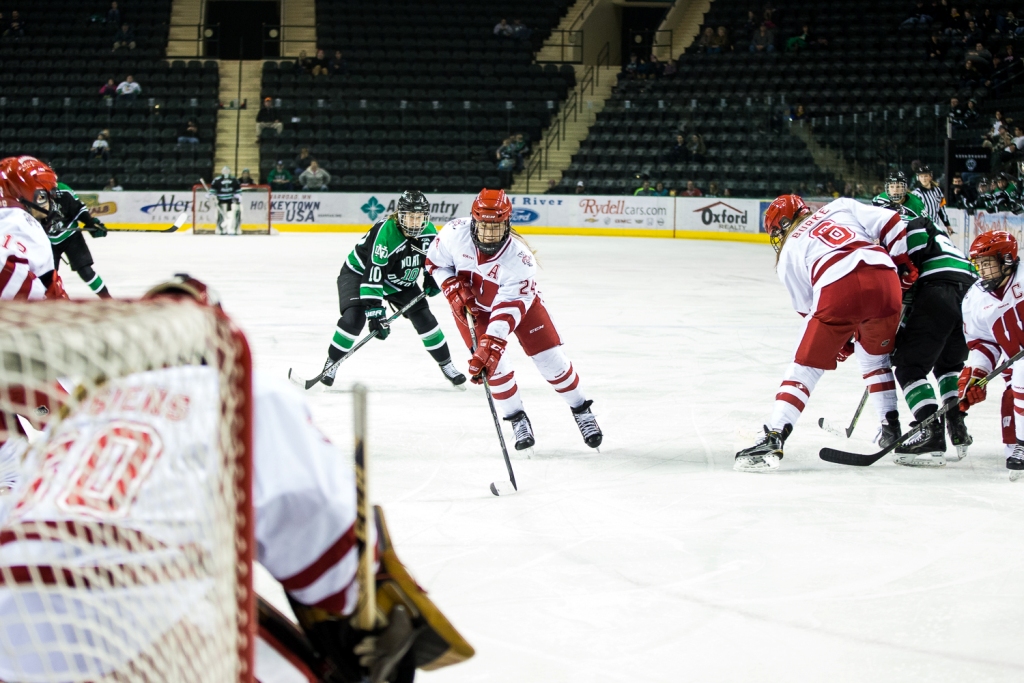 GRAND FORKS, N.D. — A balanced attack through three periods of play led the No. 3 Wisconsin women’s hockey team to a 4-1 win over No. 8 North Dakota in the semifinals of the WCHA Final Face-Off.

Sophomore forward Sarah Nurse led the Badgers with two goals on the night as they scored three unanswered to open up a 3-0 lead and move on to the championship game.

“I thought for 60 minutes we battled hard and we did a lot of good things,” Wisconsin coach Mark Johnson. “The players got rewarded for their efforts, so we’re pleased to move on to tomorrow afternoon’s game and look forward to the competition against Bemidji.”

With the win, Wisconsin improves to 27-6-4 on the season. The loss all but ends North Dakota’s season, as it does not have a high enough PairWise ranking to earn an at-large bid into the NCAA Tournament.

“I thought we came out with a lot of heart,” UND senior captain Andrea Dalen said. “We didn’t get the bounces we wanted but I thought we fought and kept going the whole game and I’m proud of the team for that.”

Defenseman Melissa Channell opened up the scoring for the Badgers over halfway through the first period, with a big one-timer that beat UND goaltender Shelby Amsley-Benzie up high.

“Those are the things you’re looking for in these types of games,” Johnson said. “When you get an opportunity, somebody steps up and makes a big play. Certainly her shot was earmarked for the top corner and for us, coming in here and getting the first goal was a big confidence builder.”

Sydney McKibbon doubled Wisconsin’s lead about four minutes into the second period, and the Badgers headed into the intermission with a sizeable advantage.

Midway through the third period, Nurse put Wisconsin up 3-0 with a power-play goal, marking the first time in seven games that Amsley-Benzie has given up more than two.

North Dakota got one back when Tori Williams scored an extra-attacker goal with 4:23 left on the clock. The Badgers quickly halted any momentum that may have been building for UND, however, as Nurse scored her second of the night into an empty net just over a minute later.

“They’re obviously playing for their season and so I think once they got that goal, we needed to come out and have a comeback for them and we responded well,” Nurse said.

Even with the late pressure from UND, Wisconsin goaltender Ann-Renée Desbiens stood tall in net, and the Badgers took care of the little things to stay in control of the game.

“I think my team did a great job just icing the puck, just making sure they got it out of the zone,” Desbiens said. “I think overall it was a great team effort at the end to make sure they didn’t score any other goals.”

North Dakota was clearly frustrated by Wisconsin for most of the night even though it held a 27-26 edge in shots. Playing from behind after the first 12 minutes proved to be costly.

“If you look back on all of the games with Wisconsin, when they play with a lead, for big chunks of it, it’s tough sledding when you’re coming from behind,” UND coach Brian Idalski said. “They’re a really good team defensively; they have good goaltending. So we wanted to play with a lead and we weren’t able to do that.”

Desbiens finished the night with 26 saves for the Badgers, while Amsley-Benzie, a Warroad, Minn., native, made 22 stops for North Dakota.

Despite the result on Saturday, UND saw some big improvements over the course of the year, and ends the season at 22-12-3 after being 4-6-2 at one point in late November.

“It is by far the most growth of a group start to finish that I’ve ever been a part of, as a coach and maybe as a player,” Idalski said.” I have a lot of respect for our leaders, our captains, and our seniors.”

North Dakota also experienced more than its fair share of adversity this season, and Idalski is proud of the way his team came together in spite of it.

“Success isn’t dictated by what your record is,” he said. “These kids, dealing with adversity and with a teammate being injured, with a teammate losing her father, those are traumatic things for anybody. For them to turn around and play a hockey game on top of that, they’re solid kids and those experiences are going to serve them very well as adults well beyond their time here, and really bonded them this year. So when you start to talk about success, that’s a success.”

With the victory on Saturday night, Wisconsin advances to the WCHA championship game for the first time since 2011, and will have its first opportunity since then to take home some postseason hardware.

“The team’s excited to play in a championship game,” Johnson said. “I know for our seniors, it’s been a few years, and so it’s an opportunity for them to play for a trophy tomorrow afternoon. They need to be excited about that. It doesn’t happen very often in our sport and when you get a chance, you want to make the most of those opportunities.”