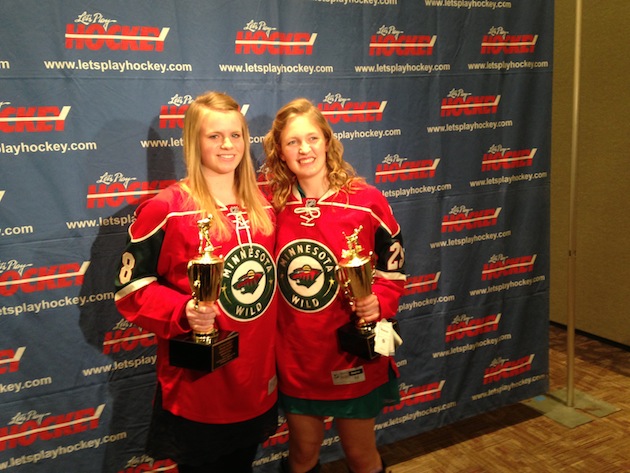 Baldwin is the first player from Minnetonka to win the Ms. Hockey award and O’Neil is the second Hopkins goalie to win the Outstanding Senior goaltender award.  Kallie Billadeau won the award in 2010 as a member of the Hopkins Royals.

Baldwin is the first blue-liner  to win the award since South St. Paul’s Ashley Albrecht in 2002.  A blend of an offensive and shut-down defenseman, Baldwin is the career leading scorer among defenders at Minnetonka.  She averaged over 30 minutes a game this season and was an anchor as the captain of her team. .  She has been named all-conference three times and is a three-time all-state winner.  She was a member of the US Women’s National Under-18 team that won a sliver medal at the World U18 tournament last year and will be a part of the team again this year when they play in March.

Baldwin will be a member of the University of Minnesota to continue her hockey playing and education.  She carries a 3.45 grade-point-average and is actively involved with volunteer work.

“I have been to this banquet for four years and it’s kind always been a dream to be up there (at the table) but today, it kind of came true and I’m just really grateful for the experience and opportunity,” Baldwin said.  “There’s so many amazing people that are associated with the name and I’m just very grateful.”

Baldwin stormed on to the scene at a young age as a high level player and consistently improved to the level of achieving the highest honor in girls high school hockey.  She was quick to deflect praise and pointed to her teammates and coaches as to how she continued to improve each season.

“It all goes to my teammates and my coaches,” Baldwin stated after the banquet. “I am so lucky to have such amazing coaches at Minnetonka.  They have been so instrumental in my success as a player and so much thanks goes to them and my teammates.”

O’Neil capped off a seasons where a lot of expectations and she met and exceed those.  She posted an 18-5-0 record and had a sharp .948 save percentage to go along with a 1.25 goals against average and seven shutouts.  O’Neil is committed to play her college hockey at Boston University and was a two-time all conference goaltender in the Lake Conference.  She was an honorable all-state selection last year and named to the all-state team this year.

O’Neil talked about the importance and legacy that surrounds the award she just won. “I was looking through the list after I got done and I’ve met only a few of them, but the few that I have met are all unbelievable people,” Oneil said after the banquet.  “They are all great goalies and just great people all around.  Kallie Billadeau is one of the winners from Hopkins and she was kind of my mentor when I was younger so it’s kind of cool to be able to put my name in the same kind of realm as she was.”

When asked about what is common about Hopkins goalies and this award, O’Neil was quick to point to the coaches and her support structure and said, “It all comes down to our coach,” Oneil said. “We have coach P (Vin Paolucci) and he is an unbelievable coach, he’s an unbelievable man.  He really puts us first and he has really made Hopkins what it is today.”

Both players had a memorable season and were able to add to the legacy of Ms. Hockey and the Outstanding Goalie awards that were issued at the River Center before a packed house of over 500 attendees.  Let’s Play Hockey delivered another solid performance as the event continues to grow each year.

Past Senior Goalie of the Year Award Winners: