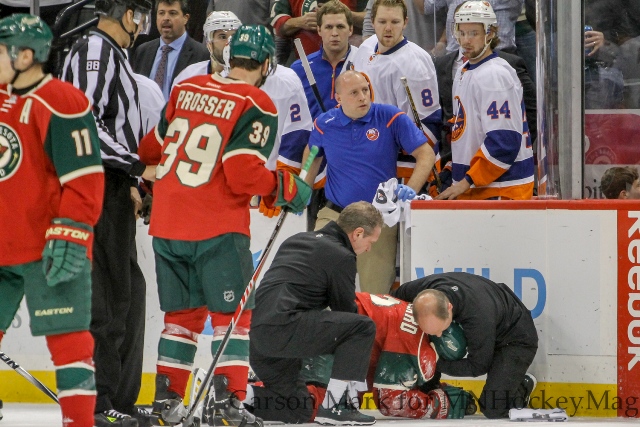 Wild D Keith Ballard is attended to after taking a hit from the Islanders’ Matt Martin in the second period of Minnesota’s 5-4 win over the Isles on Tuesday night at Xcel Energy Center. (MHM Photo / Carson Mark)

The word “scary” came up over and over in the Wild dressing room Tuesday night.

The New York Islanders’ Matt Martin knocked Minnesota’s Keith Ballard head-first into the boards in front of the Islanders’ bench with New York leading 3-0 in the second period and medical personnel rushed on to the ice in record time to assist Ballard.

The former Gopher defenseman, one of eight Minnesota natives skating in the Wild-Islanders game at the Xcel Energy Center, appeared to be convulsing and a stretcher was immediately wheeled out.
Somehow, after a lengthy delay, Ballard got to his feet with help and walked off the ice, after which he was taken to Regions Hospital for tests and observation.

The Wild responded, too.

According to those who keep these kinds of records, the Wild came back from a three-goal deficit to win in regulation for the first time in franchise history.

The score was 4-1 heading into the third period, but goals by Mikko Koivu, Erik Haula, Thomas Vanek and Nino Niederreiter during a 12-minute stretch lifted the Wild to a 5-4 victory in front of 18,904.

After managing just three shots on goal through 20 minutes, the Wild pretty much dominated the rest of the way. They outshot the Islanders 12-1 in the second period and 15-7 in the third to rescue another dismal start.

It was 3-1 in the second period until the Islanders’ Josh Bailey scored on his team’s lone shot of the period, a goal that should have been enough to puncture Minnesota’s attempt at a comeback.

Wild coach Mike Yeo loved the result and the win, but “the biggest thing to me is we needed to respond,” he said.

Yeo did not see Martin’s hit on Ballard – no penalty was called – and he needed to crane his neck from the bench to see what was happening with Ballard on the ice.

Haula didn’t see the hit, either, but he saw Ballard on the ice.

“It was really scary,” he said.

Vanek, who added an assist to his goal, played on the 2003 NCAA championship University of Minnesota team with Ballard.

Vanek labeled Ballard’s injury “pretty sickening,” adding, “But I think we took it in a positive way. We took the emotion in a good way and started playing hard and it was a great comeback win for us.”

Just four days after the Wild fell behind 3-0 to Anaheim before grabbing the lead and yielding it again in a 5-4 defeat, Minnesota again came out flat and unsteady.

“It’s hard to pinpoint why we started two games like this,” Yeo said.

But the hit on Ballard opened faucets of passion and enthusiasm up and down the Wild roster.

“That’s what we need,” he added. “You can draw X’s and O’s, but passion and emotion, that’s got to be there for us, no question. We’ve got to find a way to bring that.”

On this occasion, it did.

“Obviously we were very angry,” Niederreiter said, “but at the same time we were also scared because nobody had an idea what was going on with ‘Bally.’

There was no need to talk about it among the players: Mikael Granlund goaded Kyle Okposo into a penalty shortly after Ballard was hurt, and Kyle Brodziak dropped the gloves and fought Martin just 23 seconds later.

“Nothing was really said,” Haula commented, “but inside of everyone I’m sure it was like, ‘We’ve got to really play for Keith here.’ Hopefully, he’s OK.”

Haula, also a former Gopher, said he believed the players were “kind of freaked out” seeing their teammate wounded on the ice.

“I have never seen something like that,” Haula said. “I think we handled it great as a team. We processed it in between periods and just went out there and played really hard.”

Koivu, who had a goal and an assist, called it “a very emotional night,” adding he hopes that Ballard can return to the team soon.

Nearly lost in the concern for Ballard and the delight in the big comeback was the return to the lineup of defenseman Ryan Suter, who had missed two games with the mumps. Suter played more than 29 minutes and contributed three assists.

“From penalty kills to power plays to every aspect of his game, he just kept getting stronger, and showed how important he is to us,” Yeo said.

Yeo talked about how Ballard’s injury pulled his guys together, and they were universally concerned about their teammate when the game was over.

“When you see a guy down like that, it really hits you,” defenseman Nate Prosser said. “All you can do is pray for him right now, and hopefully he’s feeling better quick.”