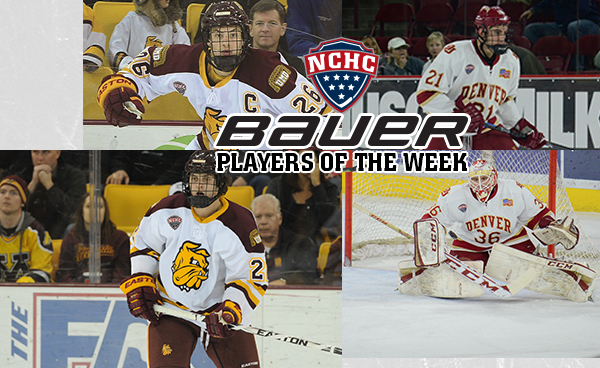 COLORADO SPRINGS, Colo. – The National Collegiate Hockey Conference (NCHC) announced its Bauer NCHC Players of the Week for the week of Feb. 2-8 on Monday with Minnesota Duluth capturing two awards and Denver claiming the other two honors. The winners for week 16 of the season are UMD senior forward Adam Krause for Offensive Player of the Week, DU senior blue liner Joey LaLeggia for Defenseman of the Week, UMD freshman forward Jared Thomas for Rookie of the Week and Denver freshman netminder Tanner Jaillet for Goaltender of the Week. LaLeggia has now earned his award three times this season while Jaillet has won it twice in 2014-15.

Krause led the Bulldogs to a non-conference sweep of Northern Michigan, chipping in four points on a goal and three assists while posting a plus-5 rating in the two games. Although he was held pointless in Friday’s 3-1 win, the UMD captain put three shots on goal and was plus-1. The next night he exploded for a career-high four points and compiled a plus-4 rating in the contest. Krause scored the Bulldogs’ third goal on a breakaway to make it 3-1, while he dished out the primary assist on UMD’s first goal and fifth goal, which came short-handed. He also assisted on the Bulldogs’ final tally in the 6-3 win Saturday as he was named the game’s first star. Krause put three more shots on goal Saturday and finished with six shots on the weekend.

In Denver’s only game of the weekend, LaLeggia led the Pioneers to a 3-0 shutout of rival Colorado College, anchoring a defense that did not give up a goal and was 1-for-1 on the penalty kill. The Edmonton Oilers prospect also contributed offensively, handing out two assists in the win. His first assist was the primary helper on the opening goal as his shot was deflected in for what turned out to be the game-winning goal. He also helped seal the win with an assist on an empty-net goal. LaLeggia posted a plus-2 rating in the win, blocked two shots and fired three shots on goal against the Tigers.

Thomas had a big weekend to help lead UMD to a sweep of Northern Michigan, tallying three points on two goals and an assist in the two games. On Friday, he scored the game-winning goal early in the third period to break a 1-1 tie, which was his first goal since Oct. 18. He also put three shots on goal in the 3-1 victory and was named the game’s second star. In Saturday’s 6-3 victory, Thomas was moved to UMD’s top line and recorded just his second multi-point game as a Bulldog with a goal and an assist. He helped set up UMD’s third goal to go ahead 3-1 in the first period, while he capped the win by scoring a goal for a second straight night in the third period to make it a 6-2 game. Thomas posted a plus-3 rating in the win Saturday. With his two goals on the weekend, he doubled his season total entering the NMU series. Thomas finished the weekend with a plus-3 rating, four shots on goal and went 14-6 in the faceoff circle (.700).

Jaillet recorded his first career shutout in Denver’s only game of the week, backstopping the Pioneers to a 3-0 win at rival Colorado College. He stopped all 30 shots that came his way, tying his career high for saves (Jan. 24 at Miami), as he recorded double-digit saves each of the first two periods in a tight game. Jaillet also helped DU kill CC’s only power play of the game as he finished with a 1.000 save percentage and perfect 0.00 goals-against average. He was named the game’s first star while earning his ninth win of the season. Jaillet dropped his GAA from 2.14 to 1.97 on the season and upped his save percentage from .920 to .927 on the campaign.